Creatures (commonly referred to as Creatures 1 to differentiate it from later entries in the series) is the first in the series of Creatures games. It's an artificial life simulation game full of some of the most adorable creatures you'll ever meet!

Change the registry key "Privileges" in HKEY_USERS/.Default/Software/Millenium Interactive/Creatures/1.0 from "user" to "darwin" or "cheese".

Change the registry key "Privileges" in HKEY_USERS/.Default/Software/Millenium Interactive/Creatures/1.0 from "user" to "doctor" or "skirty".

Change the registry key "Privileges" in HKEY_CURRENT_USER/Software/Gameware Development/Creatures/1.0 from "user" to "doctor" or "skirty".

The only difference between the different versions of the cheat is that doctor/darwin opens a blank world by default, whereas skirty/cheese opens the player's current world, "world.sfc".

While debug mode is active, the following changes are in effect:

These changes are only in effect in blank worlds: 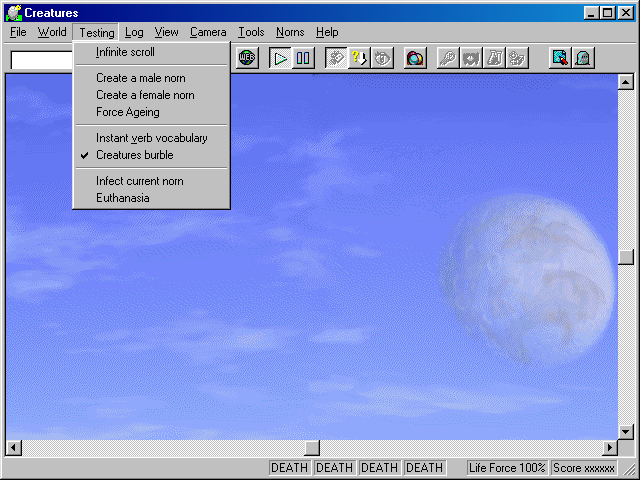 There are also three new dropdown menus at the top of the screen. The descriptions are written as they appear in the game, so excuse any grammar mistakes.

Some options allowing you to save your current world under a different filename, load other worlds, and even create new ones from scratch. The new world option wouldn't be of much use to the majority of users, as without external tools there is no way to fill the blank world up with usable objects and scripts.

All sorts of fun options to help you play God, including an option to make the creatures finally shut up or even kill them... but who could be so cruel?

There's some really interesting looking stuff here, but unfortunately all of the options are greyed out and unusable.

Stored in the root directory amongst the other icons used for the kits is what appears to be an earlier design for the graves created when a creature dies. The filename "CREM.bmp" would seem to imply creatures would be cremated. It also seems to lack an obvious place for the photos to go. This file no longer exists in Creatures: The Albian Years.

This page design can also be seen in the tutorial video included with the game.

Located in the same file as the teapot, hooch and honey pot are an unused set of graphics for a refrigerator.

The refrigerator can also be seen in the tutorial video included with the game.

Located in the same file as the other fish in the game are an unused set of graphics for a flying fish.

Located in the same file as the fish bowl, fireplace and the wall clock is an unused graphic of a teddy bear wearing a hat.

The Bed Time Bear can also be seen in the tutorial video included with the game.

The Bed Time Bear later became available as an official free download in Creatures Object Pack 2, and later still was included with the version of the game found in Creatures Deluxe and Creatures: The Albian Years.

Located in the same file as the fish bowl, fireplace and the wall clock is also an unused graphic of a microscope.

Graphics for an animated version of the water pump seen in the garden. They are cut out slightly differently from the used water pump and feature a different handle design.

Low quality graphics for a blackboard, which seems to have been the precursor to the computer used in the finished game. Interestingly, the internal script commands used for the computer are still "BBD:" commands. "BBD:" stands for "Blackboard", as confirmed in the Creature's Development Guide.

Located in the same file as the rest of the submarine graphics is an unused graphic of a glowing green eye. It would have been positioned over the hollow eye already present on the submarine.

Located in the same file as the other musical instruments in the game are an unused set of graphics for a party blower.

It's not entirely clear what these graphics were intended for, although the name of the file seems to imply it was some sort of teleporter. It looks more like it was meant to transport small objects rather than full creatures.

A copy of the graphics for the raft exists, stored slightly differently from the used ones. This is most likely not used because it isn't tall enough for an adult Norn to stand in the bounding box.

Located in the same file as most other items of food in the game are an unused set of graphics for a coconut.

Although some coconuts did later became available as an official free download in Creatures Object Pack 2, they used different graphics than the ones included in the base game.

Graphics for an early version of the Norns. They can't actually be directly loaded in the game as the graphics all appear in this one file, rather than being split into separate files for each body part as the game engine expects. The graphics in this file are also stored in a slightly different way from the others in the game. The palette needs to be loaded in reverse order to make the graphic display correctly.

This version of the Norns were later modified (the tails were made considerably smaller and angry adult male head and full female and child sprites were created), and became available as part of Creatures Life Kit #1 under the name "Ron Norns", a reference to the first ever Norn. Later still they were included with the version of the game found in Creatures Deluxe and Creatures: The Albian Years.

An exact duplicate of "b020.spr", the adult male body for the Brown Mouse norns. It was probably used during testing sometime after "full.spr" (see above), but before the naming scheme for body parts had been finalized.

A file called "gren.spr" is present in the same place as all the other graphics in the game, but attempting to load it in any known Sprite viewing program causes a crash. A quick look inside the file with a hex editor reveals it's completely devoid of all meaningful data (it's the hexadecimal character 00 twice, and then CD for the rest of the file), so we can only guess at what this file's purpose once was. Grendel? Green?

Judging by the name and general feel of this sound, this seems like it could have played as the incubator powers down. "iend.wav" is used instead.

The first of these is a radio tuning sound, the latter two are appropriately tinny short pieces of music that seem like they were intended to play when using the radio on the beach. Instead the radio just reuses the music from the jukebox, "radi.wav".

Judging by the name and general feel of this sound, this seems like it was meant to play when using the jukebox. Instead it just reuses the music from the radio, "radi.wav".

There are some Norn sounds that ended up not being used in the finished game. Male (0) and female (1) variants exist for each of these.

Some of these sounds can be heard in the tutorial video included with the game.

Much like there are some Norn sounds that ended up not being used, there is one Grendel sound that didn't get used either.

It's not clear what use this sound would have had. It sounds a bit like a Grendel sound, but it's noticably lower quality than any of the used ones. No idea what the name means either.

The script file for the refrigerator that didn't end up in the finished game is still present in the file used when creating new worlds, "eden.sfc". It references two unused sounds, "frij.wav" and "anch.wav". "frij.wav" still exists in the Sounds directory, but "anch.wav" does not.

It's not clear what use this sound would have had. Maybe it would have been for a toy.

An unused script references this sound which would play after the lift puts nearby creatures in it, as it starts moving upwards.

The script file for the hot air balloon that didn't end up in the finished game is still present in the file used when creating new worlds, "eden.sfc". It references two unused sounds, "flam.wav" and "ball.wav".

This sound would play after the balloon puts nearby creatures in it. It was most likely the sound of the flame filling the balloon with hot air.

This sound would play when the balloon touches the floor, it appears to be part of some sort of landing script.

Two files in the Sounds directory have no obvious use at all.

However, if you reverse them, slow them down by 50% and stick them end on end...

You get some low quality audio from "And Now for Something Completely Different", a 1971 film by Monty Python! The source of the audio can be heard about 30 seconds into the original trailer for the film.

As well as the Norns and Grendels, the game also has support for two more species of creature which can be created using the official Genetics Kit, which isn't included with the game.

The name "Ettin" is only revealed by using the Genetics Kit. Although official content for this species slot was never created, it did end up getting used in subsequent Creatures games.

The name "Shee" is only revealed by using the Genetics Kit. Official content for this species slot was never created, even in subsequent Creatures games. In Creatures 3 and beyond, it got renamed to Geat, but still never saw any official use.

One image of what the Shee may have looked like can be found in Creatures - Official Strategies & Secrets.

There are some references to Wind, Temperature and Light Level values scattered throughout the game. Unfortunately, none of them are functional.

An internal script command called "WIND" is mentioned in the Creature's Development Guide. It's supposed to return a numerical value from -3 to 3 of the Wind Speed/Direction of the target object. However, the game engine has no way to set this value so it always returns 1.

An internal script command called "TEMP" is mentioned in the Creature's Development Guide. It's supposed to return a numerical value from -3 to 3 of the Air Temperature of the target object. However, the game engine has no way to set this value so it always returns 0.

There is a gene in every default creature that attempts to check the Light Level, and is supposed to make the Creature sleepy when it's dark (Gene 139 in "mum1.gen" for example). There is no way to set or return this value using the game's internal script commands, but setting up a creature to output a chemical to monitor changes in Light Level reveals it stays at the same fixed value no matter what too.

A strange file located in the game's "TempBu" folder has one of two pieces of writing in it, depending on the version of the game. This file only exists because the installation program couldn't make a blank directory, and was written by Peter Chilvers.

There are several different variations of the screen seen while the game loads. Seemingly every other company which published it wanted to stick their logo on it and play around with the "LOADING WORLD..." text. The shading on the egg and flowers can be seen to change slightly between versions too.

Most versions of the game (excluding Creatures Trilogy) include an unused titlescreen in the file "BTITLE.BMP" which lacks any company logo, but adds the words "MASTER CANDIDATE" to the top left. This would have been used in an unfinished version of the game, with the "B" in "BTITLE" possibly standing for Beta.