DS Kageyama Method: Correct Kanji Kakitori-kun - Now with Kanken Preparation! is an expanded re-release of a kanji learning game. With the help of Professor Kageyama and some polygonal birds, study up and prepare for the Kanji Kentei! 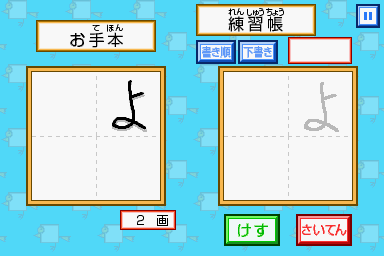 In bimoji/, there is unused data for Writing mode—specifically, stroke files for the small hiragana っ, ゃ, ゅ, ょ and the small katakana ッ, ャ, ュ, ョ. If these small kana are hacked into the character selection screen, Writing mode will be able to load the unused files.

Once loaded, however, any attempt to actually write the small kana will result in a score of 0 points. This is probably caused by other missing or incomplete data.

Since this game is played with the Nintendo DS held vertically like a book, all graphics are actually stored sideways in the ROM (except when noted below). All affected images have been rotated for easier viewing.

title_bg00.narc is a simple title screen, likely used as a placeholder during development. It's copied almost directly from the prequel to this game; the only differences are a lack of animations and the addition of a number 2.

On a similar note, while the final game doesn't have a 2 in its title, the internal title is still KAKITORI2.

title_bg02.narc is another unused image, possibly used alongside the early title screen. It translates to "Please touch the screen." It lacks the animations of the final version, but otherwise it's identical.

Neither of the two images are referenced anywhere in the game's executable.

An unused menu title that says "Help Menu" can be found among the tiles in iga/help/tori26.narc and iga/help/tori27.narc. Some of its tiles are strangely miscolored.

During tests, it would have appeared at the top of the pause menu. While these graphics are used for the pause menu, the tiles in question are not used.

obi25.narc is an unused banner that translates to "Let's try to answer." It isn't referenced in the game's executable.

title00.narc and title17.narc combine to form an unknown menu part. It looks like a menu title, except it has triangular cutouts at either end and the font is slightly thicker. The text means "Writing" (referring to the game's Writing mode), and it would have appeared at the top of the screen. Neither of these files are referenced in the game's executable.

time00.narc is a display for number of minutes. It isn't referenced in the game's executable.

The final game uses a larger minutes display, which appears during tests at the bottom of the pause menu. It's part of a unified menu graphic rather than a file of its own, and it shows the elapsed time compared to the time limit.

While the unused graphic may be an earlier version, it's also possible it would have been used elsewhere in addition to the final version.

mess016.narc is an unused, unreferenced version of "Return to the drill selection screen?" The unused one appears higher on-screen and is a tilemapped graphic, while the final version is a sprite. Aside from that, they're visually identical.

mess020.narc is an unused, unreferenced version of "Return to the settings screen?" The furigana "せ" is shorter, and there are subtle differences in anti-aliasing. Also, the unused version appears higher on-screen and is a tilemapped graphic, while the final version is a sprite.

An unreferenced identical copy of the file can be found at iga/help/mess034.narc.

mess036.narc is an unused, unreferenced version of "Practiced 10 times in a row. Return to the character selection screen?"

As seen in the comparison, nearly all the furigana were touched up in the final version, and some lighter pixels were mistakenly drawn over the last "し" in the second line. Also, the unused version appears higher on-screen and is a tilemapped graphic, while the final version is a sprite.

Test sprites featuring Tamagotchi characters, for some reason. Animation speeds are estimated. These sprites (and the debug font) are the only graphics that aren't rotated to match the DS's vertical orientation.

test_sprite is the face of Tamagotchi Planet. There is only a single animation, showing him asleep and drooling.

test_sprite2 is Kuchipatchi, another Tamagotchi character. Various animations show him panicking and falling down.

test_sprite4 is another Tamagotchi character, a Royal Servant, carrying a cup and saucer. He has different animations for walking, falling over, and getting back up.

DebugFont/key2.chr is a font that's likely meant for debugging purposes. It differs significantly from all the other fonts in the ROM—it doesn't contain any Japanese characters, the file format is completely different, and the characters aren't rotated to match the DS's vertical orientation.

DebugFont/key2.col is a palette of 16 colors. Its file format is different from all other palettes in the ROM. It seems to go with the debug font; however, the debug font is only designed to use the first two colors of the palette, black and white. 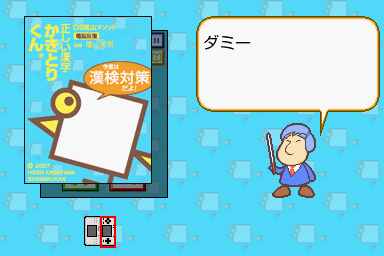 Most of the dummy lines use Professor Kageyama's default pose and leave the top screen blank. However, some use different poses, and a couple also display something on the top screen.

word/tensaku.dsv contains tips, corrections, and other messages used to evaluate the characters written in Writing mode. Among them are various dummy messages. (Several duplicates have been omitted.)

After the last two entries above, there are ten more entries in which the first two numbers continue to increase from 58 to 67, i.e. FIVE EIGHT to SIX SEVEN.

hello.txt is a regular text file that says:

It isn't referenced anywhere in the game's executable.

This text appears near the beginning of data/dltjdb.dat, the handwriting recognition database. It includes a copyright, version number, and possible build date. The website mentioned here is now defunct, as Decuma AB was acquired by Zi Corporation prior to the development of this game.

A simple debug menu, found at offset 0xEAFBC of the ARM9 binary.

A simple menu for testing music and sound effects. Located at offset 0xF9040 of the ARM9 binary.

"HiroKanata" may refer to Hiroyuku Tanaka, one of the game's programmers. The string is found at offset 0xF2154 of the ARM9 binary.

Purpose unknown, possibly test strings? Each of these begins with the first five characters of the Japanese alphabet. "鳥Ｋ" may be referring to "Kakitori" or "Kakitori-kun" from the game's title. The strings are Shift JIS encoded and reside at offsets 0xE9A34 and 0xEB318 of the ARM9 binary, respectively.

Found at offset 0xEB03C of the ARM9 binary. This file doesn't actually exist within the ROM, but an unused 3D model with the same name can be found in Densetsu no Stafy 4 and Super Princess Peach.

Found at offset 0xECEC4 of the ARM9 binary. Filenames for a 2D graphic that no longer exists. Oddly, only a "right" .NSCR tilemap file is listed here; by contrast, all graphics used in the final game have tilemaps for both left and right orientation.

Found at offset 0xF7328 of the ARM9 binary. The game only contains tensaku00_a.narc through tensaku00_f.narc; they're images used for the different score rankings in Writing mode.

If Writing mode tries to load a character with missing data, then instead of crashing, the game will load the data for the kanji 正. This behavior is never seen in normal gameplay; to witness it, one would have to delete stroke data files from the ROM or hack invalid characters (like numbers or punctuation) into the character selection screen.

The kanji 正 means "correct"; it may have been chosen for being first character in the game's title (after the series name).