Beginning at offset 0x09C800 in an unheadered ROM, some data for each map can be found, including a few lines of Shift-JIS text containing a title for each map. Each piece of this data starts with the string "SC2 DOS Version", likely the tool used to develop the maps.

The text for the Expert's Campaign maps is basically the same as the titles shown in the game, while most of the others have different names, longer names, or general comments (including an obligatory reference to a certain arcade game). The last Scenario map's text also contains the line "testc" in lieu of an actual title, suggesting that it may have began as a test map that eventually developed into the much larger map that it is now. 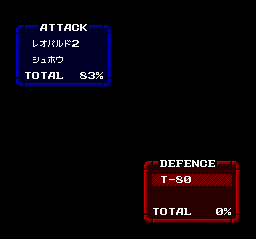 Select ATTACK/DEFENCE side unit and weapon, after that press A to start a battle.