Dark Wizard is a tactical simulation game released for the ill-fated Sega CD/Mega CD console. The player chooses one of four rulers to play as in order to retake their world from the forces of darkness (or in the case of one ruler, to take the world for a different force of darkness). The game ended up rushed to market and some features such as the time limit mentioned in the game's manual were not implemented.

There is an unused set of battle scene sprites probably intended for when a character is turned into a goat. However, since the game determines what sprites to use based on the character's class/race and does not have an exception for status effects this cannot be seen during normal play. Instead a character's class must be set to 88 by editing a saved game or savestate.

The goat has no attack animation frames and attacking or casting a spell on any target with battle scenes enabled will crash the game. Its defensive animation is fully functional and has no ill effects.

The goat also has a fully functional walk cycle however only the first frame is ever used. Characters turned into goats fall under AI control and are moved at the beginning of their respective leader's phase without animating.

The game's intermission screen has some tiles that are loaded and used but cannot be seen because they are always hidden by elements on upper layers. These elements include part of the ruler's bodyguards' faces, parts of the drapes, wall, and pillars in the back of the room, and sections of the throne. The number of tiles concealed on the throne itself will vary depending on which ruler is chosen.

Three spells intended to be useable by ruler classes are unfinished and unused. They can be hacked into a domain spell list via savestate editing but their function and effects will vary depending on whether the player is using them or the AI is. These spells, like all domain spells, can be added to the spell list of a non-ruler and work the same while skipping the MP reduction routine.

Spell 48, Web, appears to be a status effect that does nothing. It calls a unique animation sequence but the graphics for it are two unfinished sprite tiles that just display text. It has no battle scene animation, costs 200 MP to use and the AI will not cast it.

Spell 53, Silence, is a status effect that will take hold but appears to do nothing to the affected unit in terms of stopping them from casting spells. An afflicted unit will have their status line appear as a string of junk on the overworld map, Kick in the Party menu, or DF KCK 1 in their Strength screen. The AI will not cast it but observing the values written to an enemy unit's status and copying those numbers to an ally unit reveals the effect, as it were, is the same as the spell below. It cannot be cured but will fade after its timer expires. A successful casting returns the message "[%Target]'s magic has been blocked."

The player targeting rules for this spell are incomplete and it can only be cast on an enemy who is directly south of the caster. It costs 50 MP to use, uses the default spell animation on the overworld and has no battle scene animation. 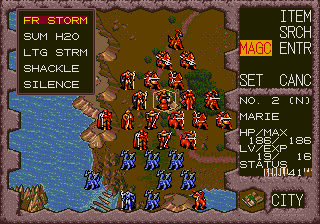 Spell 54, Shackle, is the most complete of the bunch and the AI will attempt to cast it. It uses the same targeting rules as Silence when under player control but the AI's rules are either incomplete or severely bugged and the spell ends up affecting the caster only. A successful casting returns the message "%[Target]'s movements are slow."