Desert Assault is an overhead run-and-gun by Data East. 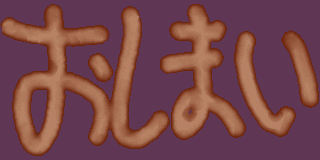 At the very end of the game's tile data is this message. The cutesy style in which it's written suggests it would have accompanied Jamie, the anime girl who appears if you beat the game without dying. Both deliberately contrast with the game's gritty military theme.

These unused graphics belong to China Town, a puzzle game by Data East also released in 1991. The graphics depict Lady and Bunny as they appear in one of China Town's endings. These tiles are non-final, though, as the top edge of the word balloon is not present in the China Town ROM (in the game, it's cut off by a window border). This suggests Desert Assault was made first.