The complete development files for Alien Breed 3D II were officially released on the cover disc of issue 95 of Amiga Format magazine, in February 1997. While supposedly a release of the source code for that game, in fact the original game's code and assets are also in there (as the sequel was clearly built on top of it), and if anything, there are actually more unused files from the original Alien Breed 3D than the follow-up game included. This includes various old code and builds from demos, as well as lots of graphics for unused enemies. It also includes the original game's cut theme music. Alien Breed 3D (and its sequel) was mostly the work of one man - programmer Andy Clitheroe. As such the development files comprise of a dump of a directory from his hard drive.

The file abreed3d.med as referenced in the executable of the released game is present here. 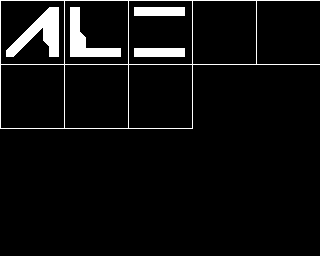 ABREEDLOGO - An aborted attempt at the game's logo. One that Twentieth Century Fox's lawyers would no doubt look at with great suspicion...

alienbreed3.128 - Early title screen. The red alien pictured actually exists as an enemy in the development files. Parts of this image are visible in the review of the game in the September 1995 issue of CU Amiga magazine which is clearly an unfinished build as it includes the early weapon graphics as seen below. It suggests therefore this image was the title screen for the game until late in development. 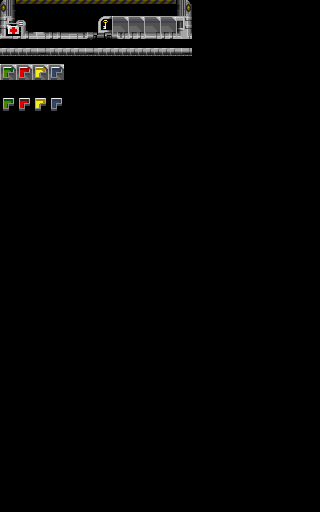 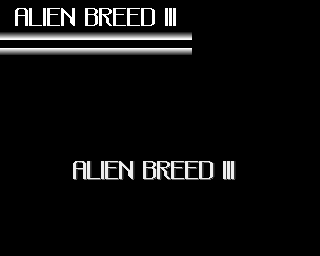 panelraw - Despite the name, is actually another early logo design 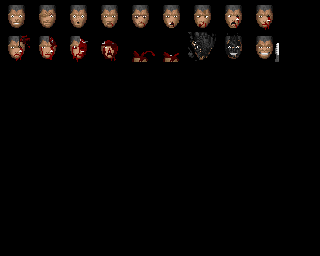 faces - The first of two poor attempts at ripping off Dooms animated character head to show health, etc. There's another copy of these graphics in facesspaced, only that seems to be the exactly the same only with the sprites in a different order. This Doom head idea seems to have carried onto the final game with what would presumably be a beating heart in the centre of the control panel, but it was never animated and just seems to have been abandoned at some point. 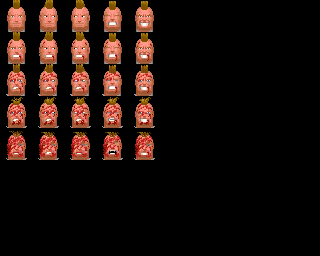 faces2 - A slightly better attempt at ripping off Doom. This design can be seen in some of the early preview screenshots of the game.

Shark.anim - there's also a static sprite sheet for this cut enemy called just shark, but this animation contains those frames plus also more frames for diagonal movement, something that doesn't seem to be possible in the final game. 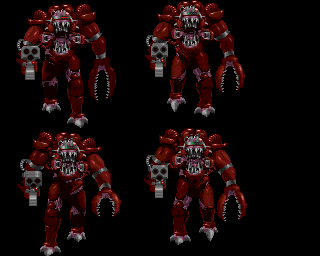 ReallyBigScaryAlien - Does what it says on the tin. The same design as visible in the early title screen. Possibly was adapted into the somewhat similar but smaller red "queen" alien in the final game. 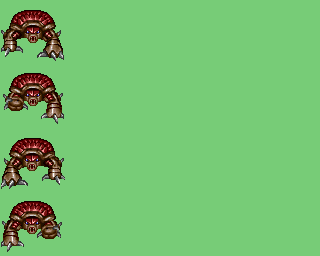 Crawler - This is likely the enemy referenced in the text file finishgame. Apparently would be "big and slow, and difficult to kill, and breathes fire". 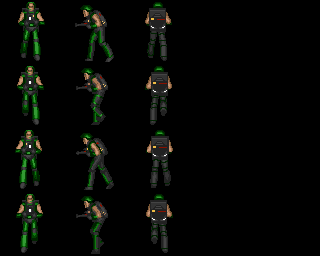 marine - The first of many variants of this generic space marine archetype, all of which were unused in the end. 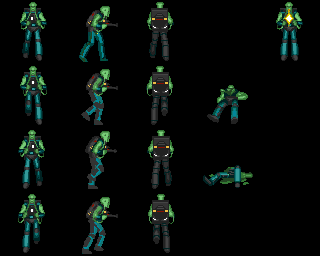 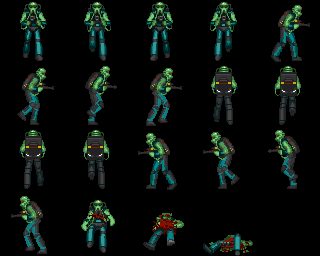 mutatedmarine - The marine, only mutated! There're two versions of this, mutmarframes has different animations including death anims, whereas the first file has what was presumably a shooting animation with a glowing light coming from its chest. 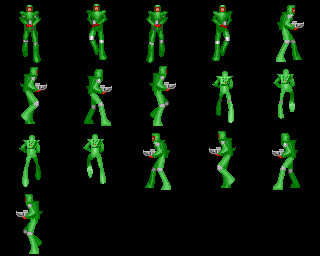 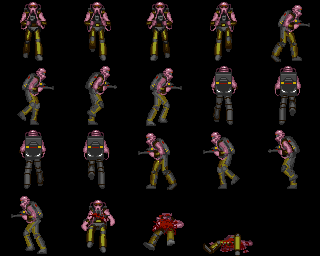 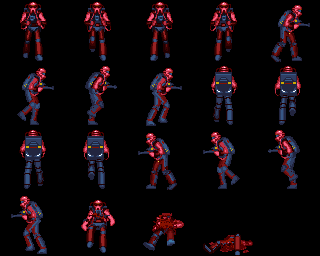 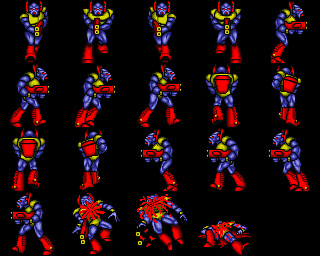 changedmarine - the final game marine enemy with a brighter palette. 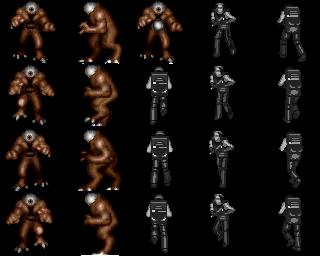 Eye Monster - A rather Doctor Who-esque enemy with a furry body and an eyeball for a head. Oddly also includes the graphics for yet another generic marine enemy in greyscale. 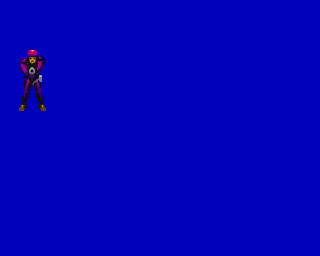 Player - Presumably intended as just that. In the final game there is no special set of graphics for the player, in multiplayer human players simply appear as the generic alien marine enemy. 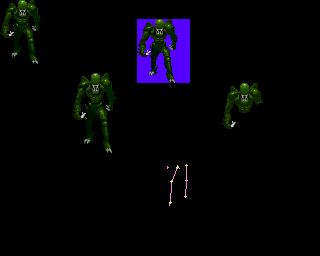 My Alien - based on the name was likely created by the game's programmer Andy Clitheroe. What seems to have been the first enemy designed for the game, based on early screenshots. Appears in the early demos also. A clear attempt at bringing the actual Alien Breed enemies into the game that was oddly abandoned for the final game. Possibly not used becase it was too similar to the design of a certain popular 20th Century Fox monster? 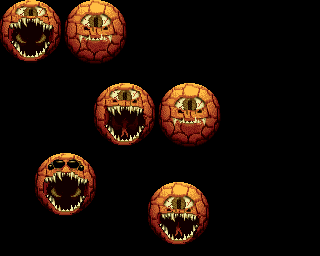 ScalyMonster - A weird mixture between a snake and a floating ball. Visible in the rolling demo of the game and cut after this phase of development, presumably to be replaced by the "Beholder" style floating ball enemy instead. 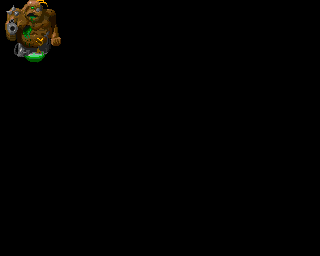 uglymonster - Only contains a single frame of animation for this enemy, which can be seen in the rolling demo. In the demo there is at least another graphic for this as a dead creature, which seems to be missing from the version here.

Three much more vibrant and rather Roger Dean-esque skyboxes than the deliberately drab Earth-like one used in the final game. 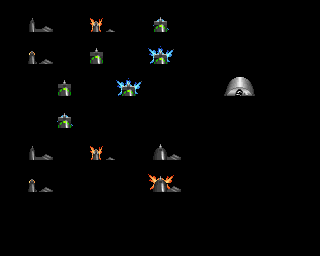 gunsinhand - Early versions of various weapons, all cut from the final game. Very Wolfenstein-esque submachine guns and other traditional ballistic weapons. These can be seen in pre-release coverage from September 1995 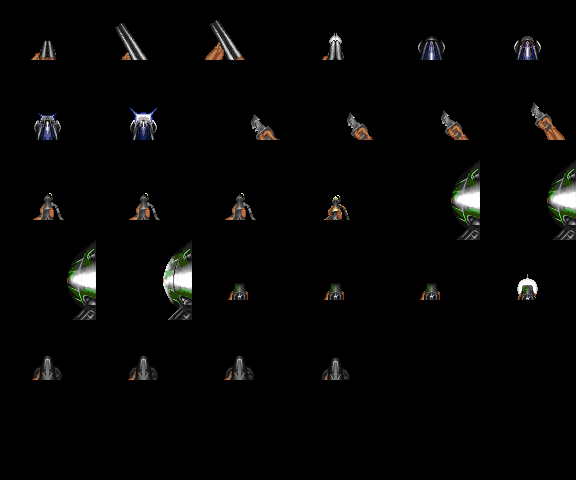 gunframes - contains all final weapon animation frames. However, also includes a cut flamethrower and knife attack graphics, which suggest these may have been weapons that were cut late on. There are also less complete separate sets of graphics for these in the files flamethrower and knife, but these only contain two of the four frames seen in this file.

plasma - two unused frames of the plasma gun that seem to show some kind of energy swirling around it.

raygun - An odd looking design for what was presumably a... ray gun of some sort

rocket1 - Early rocket launcher with a much smaller design than the screen-consuming monster that was used in the final game.

rocket2 - A rocket Launcher design very close to that of the final game, only with a smiley face sticker on the side of it. 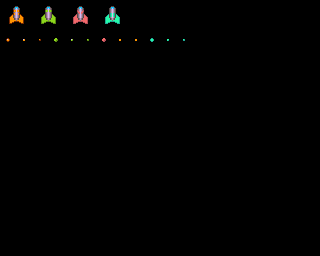 ship - odd Galaga style small spaceships. Not known at all what these would be used for.

Ideas - A presumably early list of ideas for the game

ALIENDESIGN - design notes for AB3D monsters. This seems to be from fairly early on as it still lists the pink version of the flying monsters, but more pertinently the various "mutant marine" enemies that were all abandoned in the end.

Milestones - Notes on important goals for the project

newideas - Some odd notes for things that never made the game, clearly at some point there was the potential for there to be people who could be rescued, and Andy Clitheroe really likes "glass balls".

SampsNeeded - Sound samples needed for the game at some point. These all got satisfied in the end, save the "burning sound".

thingstodosoon - apparently once important ideas. The final game has no in-game map at all, let alone one from "find computer on wall". The sequel did, however.

FinishGame - notes on what was left to finish the game

Retrieved from "https://tcrf.net/index.php?title=Development:Alien_Breed_3D&oldid=1263111"
Categories:
Cleanup > To do
Games > Games by content > Development