This page details development materials of Black Out.

Various assets related to the game can be found at the following paths:

We get to see a few unused objects in action, such as the Hammer, Shovel, and hand, as well as the unused angel creature. The sleeper was also meant to do more actions: falling asleep, rolling (possibly when tumbling down hills), and falling through thin terrain. There is also an alternate design for the sleeper, which looks not more 3D and realistic (and wouldn't entirely be out-of-place among the Yoshi's Island prologue cutscene graphics). Another sleeper design, with an orange-yellow cap, is located in the z-sword directory.

NOTE: Unless the .COL file is specified, most gifs were made using the sleeper.COL palette. 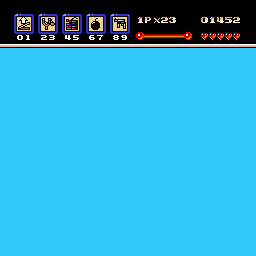 NOTE: Some images have been given blue backgrounds for better visibility.

Younger-looking versions of the sleeper.

These are most likely related to the unused rope.

An alternate version of the pachinko ball.

Some acorns which could possibly be knocked down from above.

A fruit which looks similar to the berries from Super Mario World.

An older-looking design for the Bomb item.

Some frames of a water animation.

Some variations of grass tiles.

Another variation of the grass tiles, this time with fewer spots.

A strange sphere within a block, found among the underground tiles.