This is a sub-page of Donkey Kong 64.

Several foreground props go completely unused. Use the below GameShark code to see them in place of the feeding pad in Troff 'n' Scoff's room, substituting "????" with one of the IDs below:

A simple red cube. This appears to be empty/invisible when loaded in-game.

A very rough-looking flame that doesn't even loop right. Unlike most sprite animations in this game, the frames are blended into each other, producing a neat "ghosting" effect. 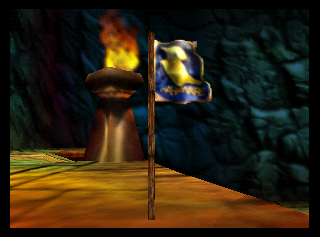 A small flag featuring the Rareware logo. The texture is used atop the ruined masts in Gloomy Galleon's seal race, though unlike this flag it does not animate.

These spooky setpieces aren't used anywhere in Creepy Castle. Even when loaded in-game, they aren't lit.

Alternate palm tree designs. Object 005A is the tree next to Fairy Island, so these may have been intended to see a similar use. 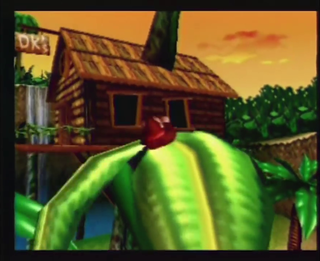 A vine object that was meant to hang off a ledge, as can be seen in the screenshot at right.

Unlike the palm trees above, this one cannot be climbed. It also appears entirely black, despite having proper texturing underneath.

Two cactus models with differing designs. Since they're under the generic "trees" label, it's not clear if they belonged to any particular level. The second one has been hacked and restored into the game.

(Source: No Context DK64 (Hacking the Cactus into Jungle Japes)) 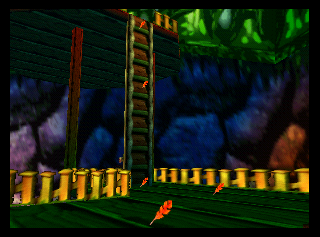 Five of these are generated when picking up an ammo crate (hence the internal name), like how five single bananas are generated when picking up a banana bunch. Unlike the bananas, though, ammo only ever comes in bundles of five, so the fact that the individual units behave as pickups in their own right is never seen. While there is one for each ammo type, all of them can be picked up by any Kong.

Various props left over from an earlier version of Angry Aztec that used to occupy map 0B before it became a Stealthy Snoop. They still exist on that map, but are located far out of bounds.

This DK Island portrait is used in the prototype version of Snide's HQ, but not the final (where it's part of the background geometry). It has a textured seam running down the middle like a door, which hints that it was originally part of Snide's Rube Goldberg contraption. 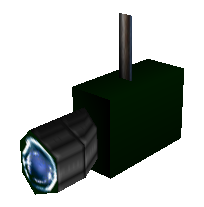 Not to be confused with the one outside Snide's H.Q. (which is part of that building's object), two of these lined the area's interior in the prototype. In-game, the base is actually white, not green.

A generic pad. This shouldn't be confused with the pedestal Troff and Scoff stand on, which is a different object (012B). It may or may not have been an early version of the Bananaporters, which E3 footage shows were originally blank. It was also used in earlier versions of some levels as a placeholder for pads in general.

Earlier versions of the Lobby/Production and Lobby/Testing doors in Frantic Factory. The former can be found near the Production Room's Bananaporter 3 in the kiosk version, but the latter goes unused in both builds. These doors are meant to open vertically from the bottom up, something none of the final's do.

A ramp identical to the one in Creepy Castle's car race. The used one is part of the background, not an object. 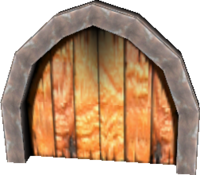 The Level/Exit Door from the old version of Troff 'n' Scoff's room still exists in the final game, unused.

Two flags labelled "L" and "R". Probably meant to be racing checkpoints - the colors match up, and it seems as though they were meant to float on the water, but the industrial design is at odds with the rest of Gloomy Galleon (barring a few spots not exactly suited to a racetrack). The seal race uses round buoys, which (along with the other used checkpoints) are of a different model format than the objects in this section.

The white texture in these shots is meant to be a red glow, which shows up corrupted in the model viewer; when loaded in-game, the flags faintly blink on and off.

In the Fungi Forest minecart course, there are red and green bells that close and open gates on the track. However, there is also a bell with a natural gold tint that goes unused. Pre-release footage and the kiosk version show that this one originally served both functions... which likely left no room for distinction between a normal bell and a "trick" one, hence the split into two colors. It should be noted that the red and green bells are among the very last entries in the object list (02B4 and 02B5), so the change was probably made at the last minute (or close to it).

Blue and green versions of the orange crystals seen at the beginning of Fungi Forest's minecart ride. 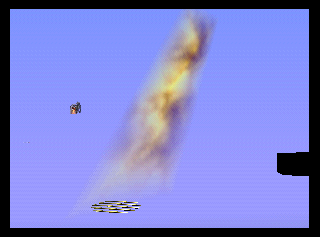 As seen in the kiosk version.

An earlier version of Fungi Forest had this sitting directly over the well in the central area.

Two decorative broken pots. There's an unbroken version at 007F in the prototype, which was removed from the final game.

An earlier version of the Crystal Caves boulder switch, which is used in the prototype version of the level. Compared to the final switch, it has a narrower frame and lacks the metal siding.

An unused duplicate of the regular set of door bars. These once blocked off the Gorilla Gone cave for reasons possibly related to Stop 'n' Swop. 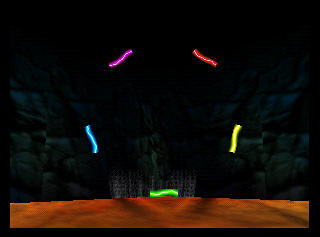 Five channels of Blast-O-Matic energy in a pentagonal shape. Clearly had something to do with Crocodile Isle, but it doesn't quite fit anything found there.

This plane of metal is meant to go on the base of Crocodile Isle's crown (and can actually be seen on the Intro Story model if viewed from above), but is nowhere to be found in-game. Since the Flying Krock flies out of the crown during the K. Rool Takeoff cutscene, it was probably meant to be a hatch that opened for it. However, the cutscene version of DK Isles lacks foreground objects, so it is never used.

Many unused objects are 2D "billboard" plants meant as scenery. Some were once used in the kiosk version, or are actually used in the final game but located out of bounds.

Retrieved from "https://tcrf.net/index.php?title=Donkey_Kong_64/Unused_Objects&oldid=846354"
Categories:
Cleanup > To do
Subpages