This page details one or more prototype versions of Donkey Kong 64.

The kiosk demo of Donkey Kong 64 came to stores in September of 1999, two months before the release of the final game. It's based on an earlier build and contains quite a few differences, as well as some content that was cut from the retail version.

The demo contains three playable portions of the game: the second Dogadon fight, a harder version of the Jungle Japes mine cart minigame, and the second Army Dillo fight. After completing an event, the game cuts to an "Available Christmas 99" screen, and eventually loops back to the intro, where you'll then be able to play the next event. 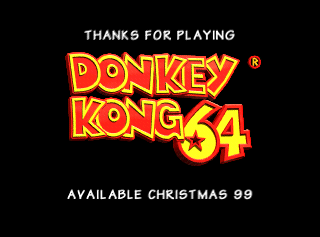 The choice of events is very odd, as they're nearly unwinnable for a novice. Rareware may have chosen these events to make the game more exciting and appealing to potential customers. 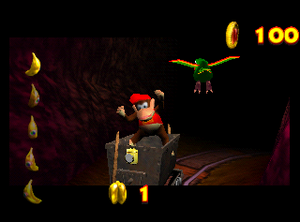 Many differences exist outside the demo's limited scope, and can only be seen by hacking: 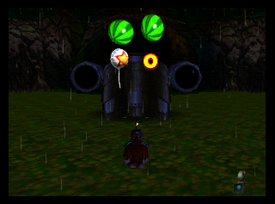 One notable difference is the sight of a balloon counter under the healthbar. Extra Life Balloons, a Donkey Kong Country staple, were set to appear in this game (and can be spotted in several prerelease clips) but didn't make the cut, presumably because the jump to 3D made lives a bit superfluous. The final game did away with them entirely, but this version, which evidently predates that decision, has the lives system intact.

As none of the demo segments have Life Balloons in them, the collectible itself goes completely unseen. It can be found in several of the early maps, where it plays a short harp jingle (also used by the sun ring in Angry Aztec) when picked up. Interestingly, it features the same star design as the barrel spawner pads.

There are also what look to be graphics of it bursting. A pop can be heard if your Kong is killed while the counter is still onscreen (an easy way to do this is to set the warp value to 56 and run headfirst into the maze), but no sprite is seen, as the HUD disappears during the death sequence. Use the GameShark code 816981A2 3320 to view it in place of the DK Coin icon during the minecart segment. 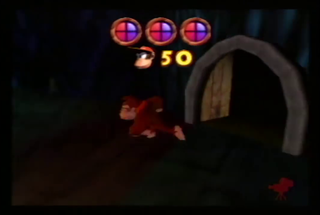 And lastly, tucked away in the ROM is this even older icon for the counter, seen in the earliest prerelease footage. This Diddy head was lifted from a pre-existing render, and was probably always meant to be a placeholder-- the balloon was already in its spot by the time E3 rolled around.

The dialogue font had brackets and a percent sign added in the final game.

Next to the copyright symbol in the menu font are a crossed-out N and O that were replaced with the infinity symbol and some inverted punctuation.

The moon texture is transparent in this version. A black background fill was added to make it pop out a little more.

The hands on the file select clock have a slightly different design.

The trademark symbol was moved down from the corner, so that it comes after the "Kong" rather than the "Donkey".

The kiosk demo has a few sprites and models that don't appear to be present in the final game.

A Golden Banana bunch, which is used in this build if you win the Mine Cart game. A single frame survives in the final game, as the emblem on B. Locker's head.

Spinning tiles with designs matching those found on the unused jack-in-the-box enemies.

A spinning, flaming alphabet block intended for the Mad Jack boss fight. He can be seen throwing it in pre-release footage.

Earlier renditions of the opening logos. Smaller versions were later used in the Rambi and Enguarde Arenas as billboards.

High-res versions of the menu font exist for the letters G, A, M, E, O, V, and R, in that order. All of them are separate textures, with the "E" only stored once so it could be duplicated. This was obviously intended for the game over screen, but the final game uses the normal low-res font instead.

Leftover graphics of... something, along with some beakers, an arrow, and a single sprite of a banana. The banana is a bit smaller and darker compared to the one used in both versions:

A trademark graphic is present after the DK letters used for the DK Rap, which is missing from the final ROM.

A lightning bolt, or a frame of animated electricity, or a leftover of some larger graphic that was removed. Hard to say. It's located in between the textures for the HUD and the lens flare/sun.

A 3D version of the game's logo. A similar model was used in early footage instead of the static 2D logo, and was animated.

Several models have gone through changes from the prototype to the final game.

Cranky's lab received quite an update in the final game. The sign was overhauled to give context that the lab indeed belongs to Cranky, and an electrode was removed from the roof (though the Kiosk version fits better). The wooden texture and the shading was given an overhaul, and there is no floor under the doorway.

Candy's Music Shop is a lot simpler than in the final game. The sign was changed to help give a musical theme, and there aren't any decorations.

Funky's Armory has no satellites or flooring. The "ARMORY" sign was changed from British English to American English. Some changes were also applied to the text's color, possibly to make the wording stand out less.

Snide's HQ has a pipe connected to a barrel, and a different antenna. The final version removes the barrel and the receptors on the antenna, but adds a keypad and security camera. As usual, the final version adds flooring to the doorway.

Several enemies were cut and aren't in the final game's data. 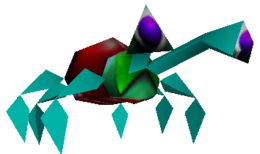 A weird multicolored bug with no animations. It may have been an early version of the racing beetle.

Re-Koil from Donkey Kong Country 3. Nowhere to be seen in either the demo or the final. 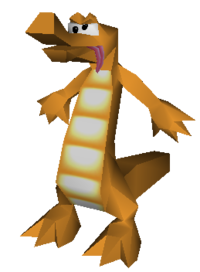 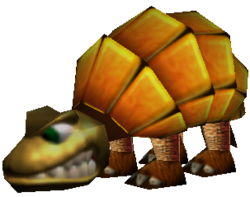 A HUD sprite for this enemy (as well as a skeletal variant) also exists in the texture data.

Two jack-in-the-boxes meant for Frantic Factory. The clown appears in the unused early boss map for that level, while the boxing glove can be seen in E3 footage. 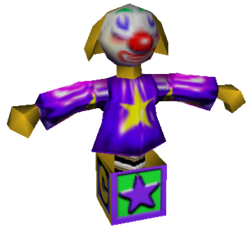 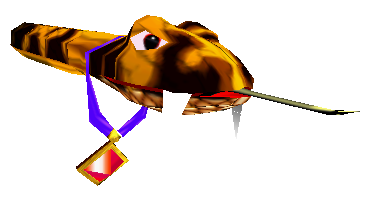 A giant snake head with a diamond necklace. He very briefly appears in the E3 1999 trailer, shooting lasers at Diddy in what appears to be the old version of map 11. Based on this, as well as the fact that map 11 plays Angry Aztec's boss theme when the removed tracks are restored (see the video below), it can be assumed that he was originally going to be the Aztec boss instead of Dogadon (who would have been confined to Fungi Forest). Statues of his likeness can still be found during the level's slide race in the final game.

Like with the Army above, HUD sprites of him can also be found buried in the ROM.

A few maps exist that ended up being repurposed into other locations in the final game. They can be accessed using the Map Modifier GameShark code, where "??" is one of the IDs below:

In the final version, this is Lanky's maze minigame in Hideout Helm. Here, it's a room consisting of two Tiny pads and a stationary copy of Tiny, who has collision and animation data. The pads appear to be non-functional, even when Tiny is hacked in with the Monkeyport. Soft resetting with the code active results in a bizarre camera sequence focusing on the clone as she stands motionless. 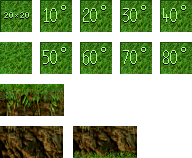 There are textures in the ROM for a grassy test surface, with slope and size markers, that likely would have corresponded to this map.

While this became a Stealthy Snoop (that itself went unused) in the final game, the Aztec objects were never actually taken out, and as such can still be seen by going out of bounds.

What would become Hideout Helm was originally an odd room containing several torches, Zingers, and the mermaid from Gloomy Galleon standing in a T-pose. Likely the original boss room for Angry Aztec.

Use the code 815C8F00 2005 815C8F02 0000 to keep this room from crashing on load. This is the old boss arena for Frantic Factory, back when the fight was structured more like Army Dillo and Dogadon. The normally unused jack-in-the-box clowns are used here, where four of them spawn from the doors at the sides. This also became Hideout Helm (specifically, the version used for non-Intro Story cutscenes).

The final DK Isles map is instead... Puftoss swimming endlessly inside what looks to be an earlier version of the entrance area in Jungle Japes. Notably, all of the trees in this map can be climbed, including the ones that normally shouldn't, suggesting there was a change at some point in development.

The level select room from E3 1999, which was used to show off various areas of the game, is still present. The doors still open and close and the camera pans out as you approach them, although they won't take you anywhere. Two Life Balloons can be collected here, and there seems to be a Banana Fairy just outside of bounds.

A room where multiple Rareware logos chase you. If you survive long enough, the game rewards you with a Golden Banana... which is impossible to get. In the final game, this is the inside of the treestump in Fungi Forest.

Many early textures exist in the ROM that can't be loaded or tied to a particular map (since the geometry associated with them is gone), but the map IDs they might have belonged to can be guessed at based on their general position in the texture bank. 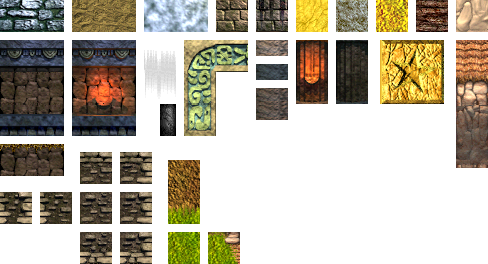 Roughly corresponding to maps 02 and/or 03 are textures for a temple or dungeon-like area. Some of them (such as the bricks and lava) appear in the final game, but occur much later in the ROM, in different maps. The fact that all of these are grouped together indicates they were once meant for a single area.

Rings of wood, the brick floor from Cranky's Lab, and some torchlit stone. Sandwiched in between this group and the one above are the test surface textures, so all three may have been for the same area.

Various rock textures, a Kremling or dinosaur foot, a grenade(?), and a smiling stone face. These occur right after the main Jungle Japes textures (maps 07 and 08), and probably belonged to a cavern-type submap.

There are a lot of animations in Donkey Kong 64 which were changed between the prototype and final releases. A lot of the differences go unseen in the 3 demo sections, however, this doesn't mean that they cannot be accessed.