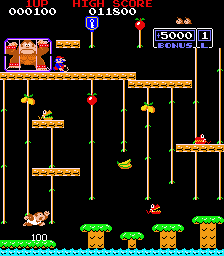 Before any stage is loaded, the game runs a checksum routine on RAM 37FB to 3801, which normally stores the "NINTENDO" part of the title screen's copyright graphic. If the checksum doesn't match, the game will be altered in the following ways:

This lightbulb is located with the fruit graphics. It was probably intended to be used in Mario's Hideout, but the standard fruits are used instead.

These graphics are leftovers from Donkey Kong, and have no use in this game. Interestingly, the leftovers include the hidden Ikegami Tsushinki logo despite them having had no involvement with Jr. (Nintendo instead hired Iwasaki Engineering to reverse-engineer Ikegami's code, which resulted in Ikegami suing Nintendo).

The last part of Nintendo's full name, which they did opt to be credited by in the NES port.

Donkey Kong Jr. expands the number of characters in the high score screen from 3 to 12. The default high scores were increased, as well.

All versions of the game besides the US F-2 set have a consistent stage order: 1-2-3-4, repeating infinitely. The US F-2 set uses an order similar to (but different from) the US version of Donkey Kong: 1-4, then 1-2-4, then 1-3-4, then finally 1-2-3-4, matching the Japanese version. This last order repeats until the end of the game.

The new level order has the consequence of making the "KEEP GOING TO MARIO'S HIDEOUT" intermission cutscene take 2 loops to appear, since it only appears before stage 3, even though stage 4 takes place in Mario's Hideout as well.