Mario Kart 7 is essentially the same thing as Mario Kart Wii but more awesome and in 3D. Oh, and you can paraglide, drive underwater, play as new characters, use seven items at once, race seven ghosts at once....but other than that, completely the same.

Two dummy textures for character emblems. These are 32x32 pixels each, whereas the final emblems are 64x64. The first one featuring the letters "L" and "R" can be found in many archives, while the second is only found in a single archive.

A dummy image that appears in two track archives: Neo Bowser City and Luigi Raceway. This image is used as a placeholder for the giant screens found in those courses, until the game replaces them with other data. The image was originally rotated 90° clockwise, but has been rotated for ease of comparison. The image is from an early version of Mario Circuit, and the differences are as follows: 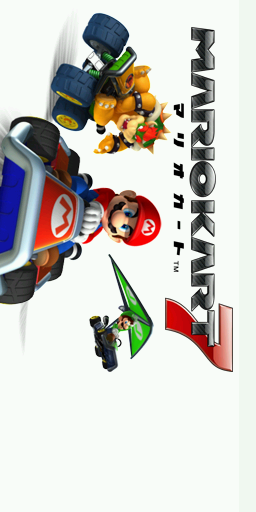 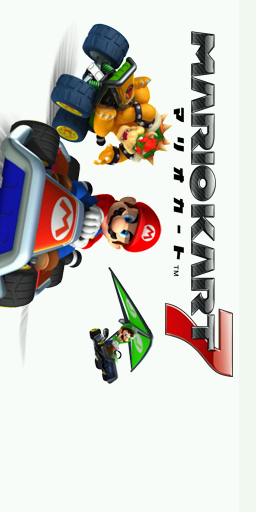 In the files for DK Pass, there is an unused texture called test_glideboard. It is the same as the used texture, but without transparency.

There is an unused sound for a countdown starting from 10 seconds (like in Mario Kart Wii) named SE_RC_BTL_CD_10_9_8.bcwav. The sound is identical to the one from Mario Kart Wii, so it was most likely carried over from that game.

In the sound file (BCSAR), there are 2 dummy Shy Guy sounds at the very end. All the used character sounds are in the middle of the BCSAR. It isn't currently known what their names are.

Strangely, in Waluigi Pinball's Sound File (GRP_CR_DS_WALUIGI_PINBALL.bcgrp), there is a copy of a sound used in Rainbow Road and SNES Rainbow Road.

This is the only unused track in the game. It is essentially an early version of Mario Circuit, with slightly different geometry and no shading. There are no references to this course in the game's code.

The following files are missing from the course archive:

The .bcmdl models are quite similar, however a few textures are different. The spotlight texture was stretched to double the width, the castle wall texture was heavily modified, and the shadow map adds shadows for the four ramps.

Strangely, there are two collisions files Gctr_MarioCircuit.kcl and Gctr_MarioCircuit_Divide.kcl inside of the szs, second concording with the model. They are almost identical, but have some small differences, such as missing water barrier. 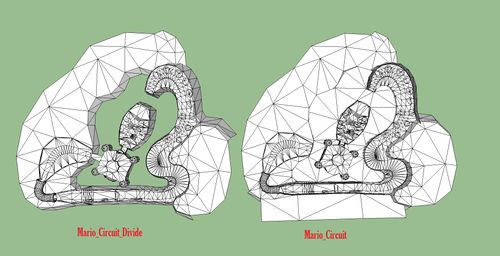 The early kmp is partially empty, only global objects, routes and areas exist. Checkpoints, cpu/item routes and some other neccesary sections to make the course load are missing.

The bottom screen map is stored in a different model (bcmdl) in the same way as Mario Kart Wii did, instead of an image file (bclim).

An unused blue Koopa shell model, found in RaceCommon.szs. The texture is slightly different than the one used for the Blue Shell item.

An unused soccer ball model (named F2_Item_Ball_Soccer internally) with a texture and a normal map, likely used for testing purposes, also found in RaceCommon.szs. The model and textures are also in Nintendogs + Cats, indicating this may possibly be a leftover from that game since they were in development around the same time. 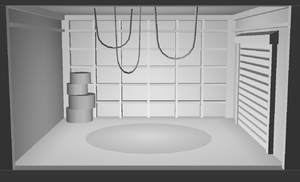 The model Garage.bcmdl is an early version of the garage that serves as the background for the character/kart select screen. Unlike the final garage, the door is on the right-hand side instead of the back, and the only decorations it has are some cables and a set of tires. It has no textures, but the vertex shading still remains.

In RaceCommon.szs/ItemReactTable.bin (a file that determines how different items interact with each other), there are 2 unused entries for Fake Item Box (FakeBox) and Mega Mushroom (BigKinoko), indicating that they might have been planned at some point during development. This file is the only one that references those items, and no programming nor references exist for them in the game's code.

On Rainbow Road. after the first gliding section, there are three Item Boxes hidden under the planet's rings. They can only be collected by flying under the rings and back up onto the course. Unlike the Super Item Box retained in DK Pass (DS), which has a unique item distribution of only speed items and Red Shells, they appear to have no special characteristics.

The Blue Shell, Lightning, and Bullet Bill can't be obtained under normal circumstances. These items will have unusual effects when hacked in.

Acts like a Green Shell but it goes on forever. The game crashes if it goes out of bounds.

Shocks the players but it doesn't always give out a point per player. The players do not shrink, and they keep any items they had.

Follows a route similar to the CPUs, and like the Blue Shell, the effect lasts forever. It performs tricks automatically. After a while it will get stuck in a loop.

Inside the message file at UI\common-XX.szs\Common.msbt, there are the messages for indicating the race number (1st, 2nd, 3rd, final). However, there are also messages for all the way up to the "31th race", allowing for a maximum of 32 races. It is likely that this would have been used with a feature for customizing the number of races in VS mode or online tournaments, both of which are locked to 4 races at a time.

Like in Mario Kart Wii, there is an unused value in the track's settings file which controls the number of laps. Modifying it doesn't seem to affect anything in-game, however. The game only has Lakitu signs for three laps, so it would be unable to properly indicate any extra laps.

There are two test items referenced as Test3 (ID 0xF) and Test4 (ID 0x10) with zero probability to appear. Changing either of their probabilities and getting them in-game will give you a star icon, which will disappear after using the item, as their "use" functions are stubbed and do nothing. The two test items actually appear in the item roulette spin animation, as the game just takes a random item ID between 0x0 (Single Banana) and 0x13 (Triple Red Shells) to display, which includes the test item IDs. This has the side effect of making the star graphic appear more often in the spin animation.

Inside a file where there are all the kart body model names, there is a reference to a kart body called "std_lod_oneTest", probably for testing. However, there isn't any model or file with that name. "std" means standard, "lod" means the model is used by the other racers, "oneTest" can mean is the first model is for testing.

Inside the .code of the European v1.1 ExeFS at 0x4F1A18, there are some references to a debug menu, such as "SndSceneDebug.MapObj", "SndSceneDebug", and "DebugPageList".

There are also a few debug controls:

Also, at 0x37B078, where there are all the options shown when finishing a race, there are debug options such as "Debug_Next", "Debug_Reload" and "Debug_Exit"

After a RAM dump, the following debug tasks can be found:

Note that Shiraiwa, Suzuki, Obayashi and Sakuraba are some of the game's main programmers.

In the download play child application (sent by the game to other consoles in Download Play mode) there is a 1.5MB file called CTRDash.xmap which has all of the 21305 function names and addresses of the download play executable. Since all of the addresses match the assembly code, the file was probably added or updated with the latest compilation of the child app. Here is a portion of it:

The file was later removed in the Chinese release of the game as it most likely had been kept by mistake.

In the award ceremony track (Gctr_WinningRun.szs), there is an unseen blue glider mushroom (like the one in Mushroom Gorge) near the tunnel section on the right-hand side. It is possible to see the stem of the mushroom by using a hack that increases the speed of the karts. It is possible that the mushroom is simply there to allow the winner to glide in from above, as the mushroom looks out of place in Toad Circuit, which the track is based on.

The icon used in the Download Play app when receiving data is a crude, early version of the one used for the main game. It is located in the banner folder. This discrepancy was fixed in the Chinese version.

Across different regions, certain tracks and vehicles have different names. These are the names that differ between the European and North American releases, along with a direct translation of the Japanese original (not counting retro courses).

Interestingly, unlike a number of other Nintendo games with separate localizations per region, it's the American script that tends to be more literal and the European script that takes more liberties. Go figure.

Despite the name change, the Japanese and North American name "Music Park" can still be seen on banners in the level in the European version.

The Japanese version also calls this kart part a frame rather than a body.

The European version also calls this kart part a wheel rather than a tire.

Swoop is another name for Swooper in some recent games. The names seem to be used interchangeably. Oddly, the North American name for the Parafoil didn't carry over to Mario Kart 8.

Version 1.1 was first released on May 15, 2012 as a downloadable patch on the eShop. Other than adding "Ver. 1.1" to the Online Multiplayer tab, this update fixed four respawn glitches that could be used to skip parts of several courses during online play:

The patch itself actually fixes all the respawn glitches, including the ones that can only be done by hacking. Though they are not included in the patch folder, so its impossible to make them work again online. However, if you were to replace the existing kmp files in the patch with their original kmp, only Maka Wuhu's would work. The Daisy Crusier and Maple Treeway ones were not fixed.

Mario Kart 7 is referred to as "CTRDash" internally. "CTR" is the product code for the 3DS.