New Super Mario Bros. pretty much resuscitated the idea of all-new side-scrolling Mario games. Not unlike its kinda-sorta-sequel, this game has a lot of unused stuff.

Mario uses the otherwise unused animation zero_g_walk and appears to use some sort of variation of the Mini Mario physics (e.g., floating and leg kicking) no matter which powerup he has. However, he can't wall jump and flies huge distances when fired from a Pipe Cannon. When this mode is on while the player is Mini, Mario won't be nearly as floaty.

You can activate it while in-level by setting one of the following memory addresses to 0x01.

Mario will start a stage as Mini Mario. It was probably used for testing, rather than for any real gameplay purpose. You can activate it while in-level by changing any of the relevant addresses above to 0x02.

The level header blocks defining backgrounds and tilesets can contain multiple entries. Each area can be set to use different background and tileset entries, which would in theory allow for multiple areas with different graphics in the same level. Unused level 3 uses this.

In practice, the code for this feature is incomplete, and a number of issues prevent it from working as intended:

It is also unclear how the support for multiple tilesets would have worked. It seems extra areas would have used tilesets 2 and up. However, in the final game, tileset 2 is occupied by the end-of-level castle.

Each level has an entrance type setting which affects how Mario enters the area (exit from a pipe, jump from bottom of the screen, etc.). There are several entrance types that are not used by any levels. 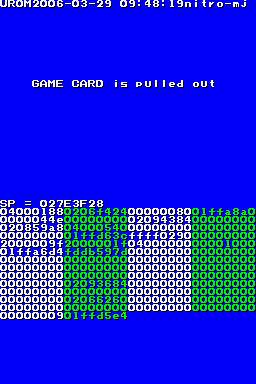 There is a hidden crash debugger in the game, similar to screens seen in other DS games developed by Nintendo, like Super Mario 64 DS and Animal Crossing: Wild World. To access the crash debugger, first crash the game (the easiest way to do this is by removing the game card during gameplay), then hold L + R + A + Left, let go, hold Down + B, let go, and finally hold Start + Select.

The top screen shows the contents of the file BUILDTIME and the reason for the crash, while the bottom screen shows a stack dump.

There is code that would bring up the Scene Load Debug Menu if Start + Select were pressed, but it isn't used as the Start + Select + L + R soft reset code overrides it.

There is an unused variable, that if enabled, triggers some unused code that allows the player to carry items and shoot fireballs with the R button. This can be done independently from running using the normal run button. This may be related to how you could kick (as Big and/or Mega Mario)/throw fireballs (as Fire Mario) using the R button in the E3 2005 demo.

You can use this Action Replay code to enable the variable:

Every version of the game has a plain-text file called BUILDTIME in the root of the ROM filesystem:

matoba_t refers to the game's Assistant Director, Taku Matoba and soejima may refer to Yasunari Soejima, one of the enemy programmers, nitro is the DS's code name. mj is likely the internal name for New Super Mario Bros.. New Super Mario Bros. Wii uses this for part of its save file name.

Another possible internal name, "Mario2d", appears twice in the arm9 binary. This is used internally in the save data, and isn't present in the demo versions because they do not use save data. This name is possibly reflected in the game's two-letter code (as seen on the front of the game cart, etc) - "2D".

A list that explains the meaning of the prefixes used in the level filenames. It is unknown what the strange order signifies, if anything. Found in the ARM9 code. It appears to be used by the "get prefix for world" code, but the game seems to function fine if the text is blanked out.

In the introduction where Mario walks towards the castle after observing a lightning strike, there appears to be moving people in the background, but due to the resolution of the game, it is difficult to tell what they are supposed to be, although common sense suggests they are are meant to be Toads, and a leaked document confirms this. But when the game is played in a higher resolution, it turns out they are copies of the Toadsworth model moving around with no animations. This could suggest that Toadsworth was originally Toad, but maybe they just chose the Toadsworth model as he resembles Toad.