Super Mario Advance is the first game in the Advance series and is a complete remake of Super Mario Bros. 2 and not, contrary to popular belief, merely a port of the All-Stars version of the game. Though certainly similar to All-Stars, using most of the same assets, as a GBA launch title Advance has several new features added to show off the 32-bit system, like voice acting and a LOT of sprite scaling and rotation.

The game serves as a bit of a follow-up to Super Mario Bros. Deluxe, a Game Boy Color game that remixed the first Super Mario game in very similar ways.

These graphics were unused in All-Stars, and they're not used here either.

The three orange tiles are パワ床 (instead of パワー床; POW Block), スイショウ (Crystal), and フラスコ (Flask), and mark where those graphics are loaded in VRAM. All other placeholder text from All-Stars has been removed.

These tiny slot icons were discarded in favor of the larger slot icons.

Two versions of vegetables present in the NES game go unused in Advance. An updated tomato that was present in All-Stars code, but unused in the game, is still here. The onion, which was used in All-Stars, is no longer used in Wart's room.

Several tiles from the NES version were revamped for All-Stars and ported over to Advance, but remain unused.

The mountain and cave tiles from the NES version.

The ice block that composed the terrain in some sections of ice levels in the NES version.

An unique type of rock, unlike any other in the game.

A non-animated and differently-drawn whale tail.

A strange and somewhat crudely-drawn block.

Part of an alternate brick pattern?

These object graphics are loaded during world boss fights, and match up with Mouser and Tryclyde (including the palette of the new snake). They're just edits of pre-existing sprites (Mouser's being a Porcupo, and Tryclyde's being a Cobrat). Given that Fryguy and Clawgrip have new boss intros, these were likely meant to be for the same purpose.

Wart was supposed to have had a longer death cry when you defeat him. He says "(ribbit) Ooh, you're (ribbit) tough! (ribbit)". 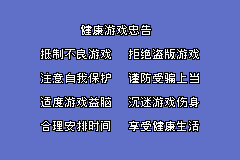 Before the intro of the Chinese version of the game, there is a small note that appears for about 3 seconds before the intro starts. This screen is just a health and safety page talking about budgeting your game time.

Since the Chinese version was released in 2004, the copyright info was updated accordingly. A credit was also added for iQue, Nintendo's mainland Chinese marketing brand.

In the Japanese version, the cast roll is more or less the same as previous versions, except Toad's name has been changed to Kinopio, his Japanese name (in fact, he's the only character with a different name in Japan to get this treatment). The Japanese version corrects the Birdo and Ostro swap, while international releases additionally take the time to change Hoopstar to Hoopster, Triclyde to Tryclyde, and Clawglip to Clawgrip, reflecting the spelling they had in manuals.

Unsurprisingly, the selection sound for the main game ("Super Mario USA" / "Super Mario 2") was also changed between the Japanese and international versions.

In Japan, the text in the character select screen says "PLEASE SELECT PLAYER" like the original versions, while the international releases change that to "CHOOSE A PLAYER".