After the release of the London Tour, an additional texture set for Red Koopa (Freerunning) was left in the game's files, showing him with a green hat, shell, and shoes instead of red. According to the filenames, the driver's name might be Koopa (Freerunning).

An unused set of textures for the Comet Tail, being light blue with a yellow stripe in the middle, and no emblem location. 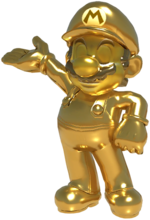 A sprite of character artwork for Gold Mario. He cannot be played as outside of Coin Rush, so this sprite is never shown.

The icon that shows up when being hit by, hitting, or being approached by Gold Mario. Since, again, he cannot be played as outside of Coin Rush, this sprite is never shown.

The minimap icon for Gold Mario. No minimap is displayed in Coin Rush, so this sprite is never shown.

A sprite for the Para-Wing kart, which is nearly identical save for the tires, which are taken directly from the Pipe Frame kart.

A sprite for the Gold Standard kart. This kart cannot be selected outside of Coin Rush, so this sprite is never shown. 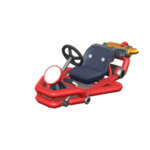 A sprite of the Pipe Frame without any tires. 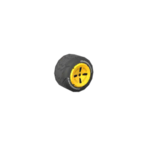 A sprite of the Standard Tires. 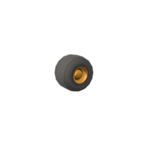 A sprite of the Pipe Frame tires. This sprite and the previously mentioned sprite of a tireless Pipe Frame could mean that at one point in time, kart customization could have been in the game.

A low-quality sprite of the Gold Glider. 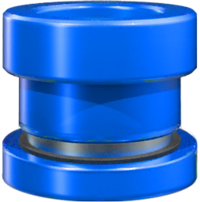 Sprites of a blue variation of the tour pipes labeled "TreasureMax" were left in the game's files after the release of Version 2.8.0. The first sprite is the pipe as it would have looked like on the pipe launching screen, and the second sprite is how the pipe would've looked like in the main menu.

These sprites were removed from the files after the release of v2.10.0.

A badge that represents that Team Bowser lost during the Bowser vs. DK Tour. Since Team Bowser won that Team Rally, this badge went unreleased.

A badge that represents that Team Mario won during the Mario vs. Peach Tour. Since Team Mario lost that Team Rally, this badge went unreleased. This badge is actually a duplicate of a used badge.

A badge that represents that Team Peach lost during the Mario vs. Peach Tour. Since Team Peach won that Team Rally, this badge went unreleased. But this badge would later be used in the Peach VS. Bowser Tour.

A badge that represents that Team Toad lost during the Toad vs. Toadette Tour. Since Team Toad won that Team Rally, this badge went unreleased.

A badge that represents that Team Wario won during the Wario vs. Waluigi Tour. Since Team Wario lost that Team Rally, this badge went unreleased.

A badge that represents that Team Waluigi lost during the Wario vs. Waluigi Tour. Since Team Waluigi won that Team Rally, this badge went unreleased.

Additionally, unused tickets with the boost items above can be found, alongside 3 tickets with empty circles in the middle of them.

A sprite for the unused stamina mechanic used in the beta. Like many other mobile games, participating in a race would consume one stamina, and once the stamina was depleted, you could not participate in any more races. Stamina could've originally be bought with Rubies (then called Emeralds). Its filename, being EventRuleCountAvoidDossun00-128x128-fmt34.png, suggests that it's now used as a test icon for an unknown "Avoid Thwomps"-like bonus challenge.

A sprite for an unused Event Token obtaining method was added to the files after the release of v2.10.0.

This sprite would be used for tours that require the player to keep combo bonuses in order to obtain Event Tokens.

All characters featured in Mario Kart 8 Deluxe have their voice clips when losing a race present in the game's files. They go unused since no characters have any reactions to finishing a race in 5th place and under, unlike past modern Mario Kart entries.

Voice clips for Peachette when losing a race. They go unused for the reason stated above.

Voice clips for Pauline when losing a race. They also go unused for the reason stated above.

A menu selection voice clip for Gold Mario. Again, since he can't be played outside of Coin Rush, this voice clip goes unused.

The music for the main menus and the music for selecting a course or bonus challenge are always played simultaneously when going through the menus, but one is heard and the other is muted or both are muted when needed, and the music track doesn't reset unless the player goes into a race and goes back. The intro for the latter music track cannot be heard, as the game always stays loading and freezed for about a second when getting to the main menu, which obviously isn't enough time to select a course or bonus challenge and hear the intro.

This game reused a lot of assets from Mario Kart 7, and a few leftover music tracks from that game were left in the files.

The trophy presentation music. It might have been repurposed for when finishing a cup, which in the final game simply shows a congratulatory message accompanied with an original jingle.

The music for the ties in Battle Mode.

The music for when the player finishes a cup in a low position.

An unused video of an animated character artwork of Toadette was left in the game's files after the release of v2.4.0. It is unknown if it was used for testing or the character artworks were supposed to be animated at some point in development.

The variants of drivers that use the emblem of the driver they're based on are actually using a duplicate of the base character's emblem, leading to 10 identical Mario emblems in the game's files.

The badge for winning in Team Mario from the Mario vs. Luigi Tour was duplicated in the game's files for the Mario vs. Peach Tour and treated as two different badges in-game, with the second copy being unused since Team Mario only won the former of those two Rallies. The same happens for the badge for winning in Team Peach on the Peach vs. Daisy Tour and the Mario vs. Peach Tour, only that both badges are used since Team Peach won both of those Rallies.

When v2.10.0 was released, Nintendo announced in the in-game news that new ways of obtaining Event Tokens were going to be added in upcoming tours by taking out other drivers, performing drifts, and keeping combo bonuses.

Only the first and second obtaining methods have been used in tours so far, leaving the other method's graphics unused.

Gliders that do not have a visible emblem position on them actually have the emblem spread all over the glider and hidden behind the glider's textures.

The karts have an unused setting that makes them stop and move around freely, which presumably would be used in a Battle Mode of sorts.

Gold Mario can only be played in the Coin Rush mode. Despite this, he has a special item known as Coin Vacuum, which is used nowhere else in the game except Coin Rush. When hacking Gold Mario to be playable in the normal game, the item can only be used on favorite courses and will act similar to when attracting coins in Coin Rush but with a smaller radius.

Additionally, the only time Gold Mario has been seen using a special item was during the Coin Rush course set in N64 Frappe Snowland that was featured in the Valentine's Tour, where he could activate Frenzy mode with the Coin Box special item.

As shown on one of the news section banners for the 2020 Halloween Tour, Ghost Valley 2 from Super Mario Kart was planned to appear. However, it has yet to make an appearance.