An object that Mario can climb up or down like a vine. It makes a "buzzing" sound as you climb, as though Mario is repeatedly hitting his head on something. It can still be placed in-game with a level editor. Although it appears as a brown flagpole ball, the actual 16×16 metatile that is used is unique to this object. According to the leftover source code from the All-Stars version this object is internally known as Wood-3, meaning that it was meant to be attached to the trees located in the Tree levels.

This behavior was later used in World A-4 of the Japanese Super Mario Bros. 2.

Enemy object 09 is a version of the green Koopa Paratroopa that simply walks in place. Strangely, it turns into a red Koopa Troopa when jumped on.

In the SMAS source code, 09 is revealed to be a scrapped enemy with the internal name 'fly green', whose code was almost completely commented out. It appears to be an early version of the green Paratroopa.

A small fragment of code relating to its size remains in the final game.

Enemy object 13 is a strange enemy with the appearance of an upside-down, scrambled Buzzy Beetle. It has similar properties to 09, with the only difference besides its appearance being the fact that it turns into what appears to be an intangible shell after being hit with a fireball.

The SMAS source code reveals it to be another scrapped enemy with removed code. Its internal name is '-1 ( bakudan )', revealing it to be a scrapped version of the Spiny.

It is currently unclear whether any of its original data exists in the final game.

This setting is also used in cloud bonuses and World 4-2's vine warp zone, however the current level's timer is still valid there, so this setting goes ineffective.

This patch is intended for the Japan/US version of the game. The Bugs page has more information on the nature of this bug. 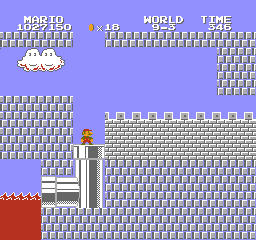 In World 2-3 and World 7-3, there's a green Cheep Cheep located above part of the level. It can't be seen or interacted with normally.

This Cheep Cheep is here because the second value of the page skip object in that area matches its ID.

Three of the four Paratroopas at the start and one of the first two Hammer Bros. have their "hard mode only" setting enabled. However, this level is nowhere to appear before World 5-3. This suggests that this level was meant to have an easier variant before entering hard mode (World 5-3).

There are two identical scroll stop objects: 46 and 47. In the original source code, these are respectively labeled "SCRON" and "SCROFF", but they're connected to the same code, and only the latter is used by the game's levels.

The Piranha Plants' heads have a two frame animation. Interestingly, this also applies to the stem, however the two graphics used to "animate" it are completely identical, resulting in the stem being stationary. It should be noted that the Piranha Plant in All Night Nippon Super Mario Bros. (Or Japanese DJ Tamori, to be exact) does use this bottom half as part of the visible animation. 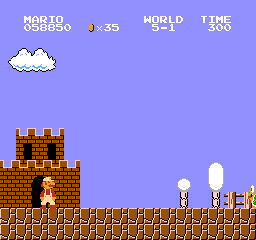 This version seems to be based on the international version.

The player options and top score are removed from the title screen. Notably, so is Mario, resulting in a static screen instead of gameplay demos.

Pressing Start to start the game doesn't work. Instead, the game starts by itself after a few seconds.

In the 25th Anniversary Edition for Virtual Console, bundled with specially-marked Japanese and Australian Wii consoles, the question mark on the ? Block was changed to "25".