Mario Paint is a silly drawing/animation/music-creation program that was also the first title to use the SNES Mouse, which all copies were bundled with (along with a mousepad, generously). The music-creation part is probably the most well-known element, though. 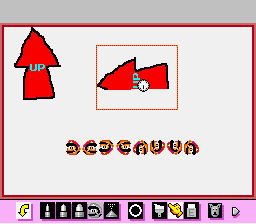 There's a set of rather useful features that are, for some reason, disabled by default. However, they can be unlocked via a simple "code" on the title screen. Click on the "N" in "MARIOPAINT™" to start the staff roll, and when "PROGRAMMER NORIAKI TERAMOTO" appears hold the right button and click the "N" again. Congratulations, you've unlocked the power of the right mouse button!

The list of (currently known) hidden features are as follows:

There are a couple of marginally-interesting features accessed by plugging a controller into Port 2.

Pressing A + B + Start will start the game without having to click on Mario.

Pressing A + B + Select will (after a short delay) load and display the currently saved drawing, animation, and music. If nothing has been saved, "NO SAVE DATA" will be displayed instead. Reset the console to return to the title screen.

A little bear icon is all that's left of a fifth, unimplemented coloring book picture. As the game's graphics are uncompressed and thus take up a significant portion of the ROM, the developers likely ran out of space and were forced to ditch it.

Clicking on the R of the game's logo will play what sounds like a baby laughing. If the sample is played backwards and slowed down by 50%, it is revealed to say "Nintendo!"

The Gnat Attack minigame has a series of "trophies" that are awarded each time you beat Level 3. While none of them are unused, there are a total of 15, and it's unlikely that most players had the skill or patience to beat the game's three stages 15 times in a row - especially since there's no way to save your progress, getting a Game Over starts you back at Level 1 of the first cycle, and there's no reward for getting any of the "trophies" (such as their becoming available as stamps) let alone all of them.

As such, here's the whole set for your viewing pleasure.

Also not unused, but extremely unlikely to be triggered without external hacking: If your regular and animation canvasses are sufficiently large and detailed that the game cannot compress them into the cartridge's 32kb of SRAM, the Save Robot will throw up a "DATA OVER FLOW" error, complete with a unique animation of smoke pouring out of its "ears" with a looping explosion sound effect. 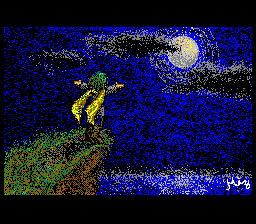 Updated versions of the game were distributed via the Satellaview service in Japan, which support standard controllers as well as the Mouse. The Yuushou Naizou version also adds the picture "Dreaming of the Moon" by Mizota Hiroko of Tokyo, the winner of a contest associated with Mario Paint BS-ban.