Paper Mario: Sticker Star is an example of an installment that's okay on its own merits, but is often considered an inferior game in comparison to its predecessors and, to a lesser degree, its successors.

A Ptooie from Super Mario Bros. 3. While normal Piranha Plants appear in Sticker Star, Ptooies do not. Ptooies did make an appearance in the sequel, Paper Mario: Color Splash.

These appear in the field, but not in battle, unlike the first two games.

These appear in the field, but not in battle, unlike the first two games.

These appear in an event in Bowser Jr.'s Flotilla, but not in battle.

These appear in an event in Bowser Jr.'s Flotilla, but not in battle.

This is mentioned in the game's Prima Guide, suggesting it was removed late in development. This enemy later appeared in Mario & Luigi: Paper Jam.

global_event.msbt contains seven empty entries, all of which may have once contained test dialogue for a tutorial given by Kersti.

town_square.msbt contains four empty entries, which may have held test dialogue for an NPC stationed somewhere in Decalburg.

Graphics/pera/pm_damage_fishbone.bcrez
Fish Bones, a recurring enemy in the Mario series, appear as obstacles in World 5-2: Jungle Rapids, leaping in the water and attempting to destroy the raft Mario uses to cross the river, and can be removed using the hammer. They are never battled in turn-based combat. However, they were likely originally meant to be fought in battle at some point, as they have sprites for being affected by the game's various status effects. 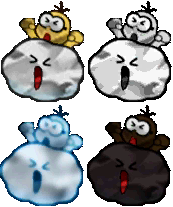 Graphics/pera/pm_damage_jugem_w.bcrez
One Lakitu appears in World 1-5: Whammino Mountain, throwing Spinies at Mario. However, it flies too high up to be attacked, but there is a purpose where one of these otherwise unused sprites can be seen as seen in this video as if the player gets a Star and jumps quickly when Lakitu drifts down towards Mario, Mario will hit Lakitu, revealing the top left sprite, but despite this, the other three hurt Lakitu sprites cannot be seen in any way.

Interestingly, a sprite of what appears to be a fishing rod is stored with the Lakitu graphics, implying that the Fishin' Lakitu seen in several Mario games would have made an appearance here. 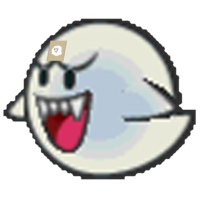 Graphics/enemy/e_dekateresa_test.bcrez
An unused Big Boo graphic. For some reason, he has an image of a Boo on his forehead.

(some of these rips: The Spriters Resource)
(discovery of Boo graphic: Hiccup)

In the final game, the Damp Oasis Toad's pool float is a 3D model. However, the Toad's textures contain a 2D version of the float, along with a slightly different drink with an orange slice.

A bigger version of the Leaf sticker.

A Piranha Plant sticker. Probably would have damaged enemies, like the Shell and Bomb stickers.

A rock sticker. Probably would have acted like the Pebble from Paper Mario.

A Spiny Egg sticker. Probably would have acted like the Spike Ball sticker, and likely would have been dropped by Lakitu.

A Super Leaf sticker. Probably replaced by the Tail sticker.

A crudely-drawn placeholder graphic present in the World 2 intermission BCREZ.

A scrap of a pipe that's seemingly underground. Has a duplicate in the game's files.

A scrap of a dead tree, similar to the ones on Whammino Mountain. Also has a duplicate.

A...rather strange scrap of a Toad with what seems to be a Boo covering its body. Presumably, this was meant for the Enigmansion. Has a duplicate as well.

A rather generic scrap of a piece of sky or water.

A scrap of the bridge in 1-1. Strangely, it's on land instead of over the river. It's also used as a placeholder texture for various Paperization effect models.

A scrap of some lily pads floating on water.

A scrap simply referred to as item01. It seems to be the bridge from World 1-1, but from a different perspective.

Just a group of flower-based scraps (despite the second looking more like a weed than a flower). 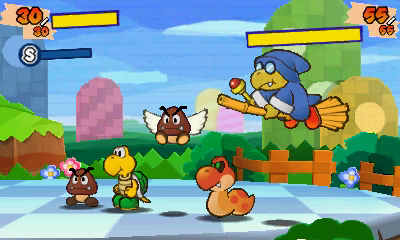 An early screenshot exists as a placeholder for the screenshots taken on-the-go for attacks that use particle effects like the Scissors. It features an early or test battle, involving a Goomba, Koopa Troopa, Paragoomba, a cut Koopa-like snake enemy and Kamek (or maybe just a normal Magikoopa, like in previous games). The HUD features an "S" (special?) meter. This screenshot appears to be from the 2010 Nintendo Conference build, due to how similar the battles look in that build to this.

Graphics/Shared/effect.bctez
A small placeholder graphic with the letters "CP" on it.

Graphics/UI/ui_status_test.bcrez
Some early battle command and button icons. The Hammer, Fire Flower, and Jump icons look similar to the ones from Paper Mario: The Thousand-Year Door. The Home Menu icons look similar to the ones from Super Paper Mario. The diamond icon may have been for partner moves like in previous games, as partners were present in pre-release materials. The icon for the X button is styled like the GameCube's A button icons from The Thousand-Year Door.

Graphics/UI/screen_capture_fade_test.bcrez
An incredibly small placeholder image that appears to be a shrunken version of the placeholder early battle screenshot found across the game's files.

Graphics/UI/ui_books_ok.bcrez
A single frame for a selector icon like the one used in the first three Paper Mario games.

Some of the environment maps used for the Things (ROBJs) have discernible features.

This one can be found in Graphics/robj/ROBJ_Cleaner.bcrez, for example. It seems to depicts some buildings in a city.

This one can be found in Graphics/robj/ROBJ_Scissors01.bcrez, for example. It seems to depict somebody sitting at a desk in an office.

If Mario falls off a level, he will flap his arms and a sound effect will play (like in cutscenes where he falls), resulting in a Game Over. This isn't actually possible without clipping out of the stage with a glitch, or by hacking. However, Mario "falling outside a stage" is mentioned in the digital manual.

Kersti speaks this line if you use the first Tree Stump Scrap in Wiggler's Tree House before finding the first Wiggler segment. This is possible to see if the Comet Piece from Strike Lake is collected before finding the Wiggler segment in said level, as the segment will not flee to Loop Loop River despite it being made accessible. The Tree Stump Scrap found there can then be collected before battling the segment and having it join your party.

The video to the right shows a glitch that can be exploited to collect the Scrap and exit the level without having to go where Wiggler's segment would be located, but as explained above glitching is not necessary. After placing the Scrap, approach the Comet Piece and Kersti will pop out and speak these two lines.

In Rustle Burrow, Kersti is trapped in a spider web, and her shouts are obscured by the tree. By looking into the text data, we can see exactly what she says.

In the Japanese and Korean versions, the ✓ block is replaced with a ◯ block during the Snifit or Whiffit game show. In Japan, a circle is often used to denote a correct answer.

The files listed below are free of any code.