A bad variation of the "Star Get" jingle is unused. It was intended for a "Ztar Get" jingle, but since Ztars do not appear in Mario Party 8, it goes unused.

Replace m802.bin (data Folder) and m802dll.rel (dll folder) with selmenu.bin and selmenudll.rel, or use one of the below Gecko Codes. Start the Swing Kings mini-game. Once the game starts, you should boot into a debug menu.

This is the last time this unused font was used by anyone thankfully. 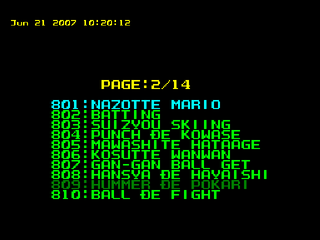 Four games later, they're still using the same debug menu. The expected completion date is added and the mini-game titles are changed once more. However, this is the final Mario Party where this same debug menu is present.


Press Up/Down to select a mini-game, and Left/Right to switch between pages.
The A / Start Button chooses a mini-game, and the B Button goes to the previous menu.
(There is no Page 1 of the debug menu - it skips to 2).

The last option on Page 9 is "MII - GAME SELECT", which leads to a debug sub-menu. 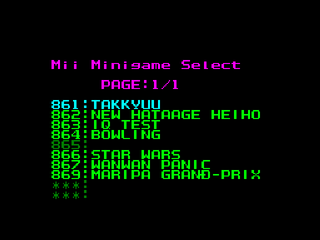 This menu tests mini-games that the Miis can participate in. The only real difference is that the Mii characters are in the character select screen.
Press the B Button to return to the main debug menu.

Pages 13 and 14 have special options.

Choosing the "DEMO" option leads to a setup menu used in a demo of the game (possibly E3?) 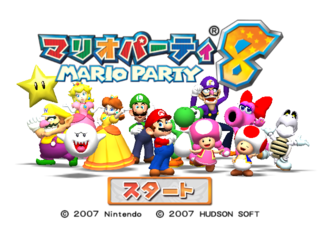 The demo is mostly in Japanese, including the Japanese logo. All of the initial playable characters pose on a simple white background. 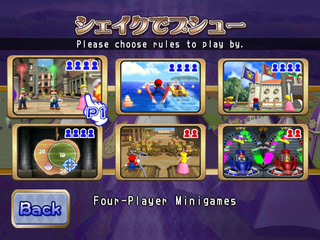 All of the mini-game titles are still in Japanese. Six mini-games are available to play: 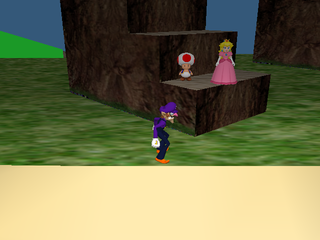 This is the physics / terrain test from Mario Party 7.

NOTE: The game assumes that the Wii remote is held sideways. 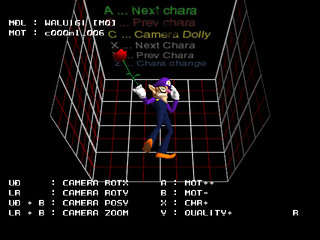 A test of all of the player characters' animations. The controls at the top of the cube are not only incorrect, but they still reflect the GameCube control scheme, never represented correctly from Mario Parties 4 through 7! 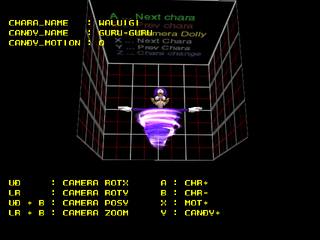 A test of all of the player characters' candy animations. The controls at the top of the cube are actually incorrect and once again, have the GameCube's control scheme. 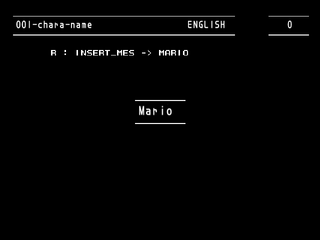 This is a test of every message in the game. Textual excitement! 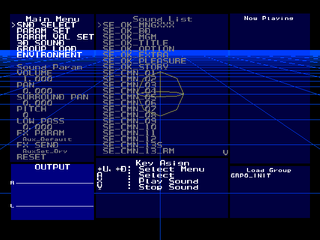 This is where the magic happens.

Change the 16 global sound variables. Purpose of these variables is currently unknown.

This is where the different sound groups are loaded. 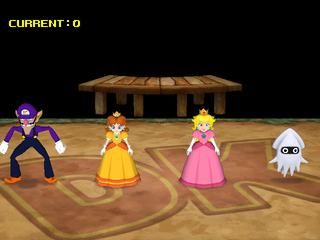 NOTE: Applies to all four controllers. 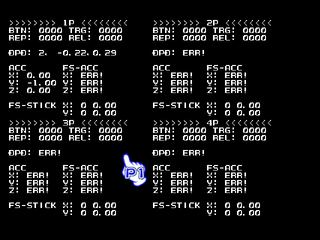 A simple diagnostic test of up to 4 Wii remotes. The + Button exits the menu. This same menu previously appeared in Kororinpa: Marble Mania.

Three (four, if counting the Sequencedll mini-game reused from Mario Party 5) mini-games are still on the disc, but unused. Their Japanese names are included on the debug menu, but they can't be selected there due to a disabled flag. It's still possible to play them by replacing other mini-games with the unused ones.

All of the preview demos for these games have been replaced by copies of Speedy Graffiti's demo. They have no English names and no game explanations of any kind.

Replace m801dll.rel (dll folder) with m809dll.rel, or use one of the below Gecko codes to replace Speedy Graffiti with this unused 4 player mini-game. 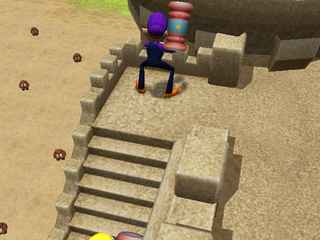 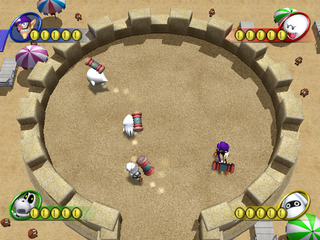 In this game, players must swing the remote horizontally to swing their hammer. The collision detection is a bit off in this mini-game. Each player has a displayed coin counter, but in this game's current state it doesn't actually signify anything and doesn't change at all during gameplay without a patched version. This is the download to a patched .rel file with a more accurate UI for the American version. 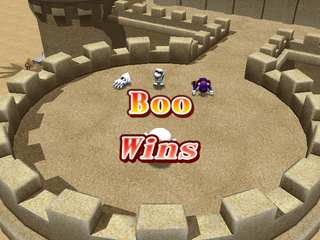 The game ends when one player is hit 5 times. The player who got the most hits in wins the game.

Replace m815dll.rel with m813DLL.rel, or use one of the below Gecko codes to replace Rudder Madness with this unused 4 player mini-game. 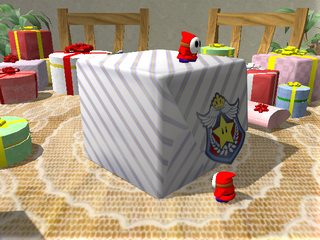 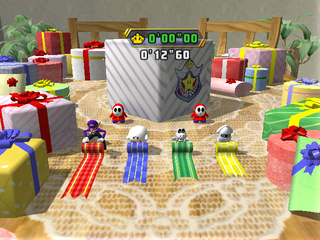 In this mini-game, the players must move their Wii remotes in a clockwise fashion to roll up their ribbons. 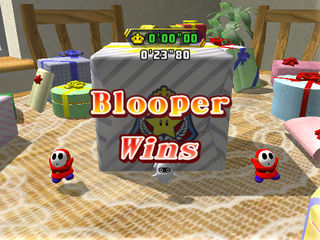 Whoever rolls theirs up first wins the game, and their ribbon is tied around the top of the giant present.

A minigame very similar to this later appeared in Wii Party U.

Replace m856dll.rel with m853dll.rel, or use one of the below Gecko codes to replace You're the Bob-Omb with this unused Duel mini-game. 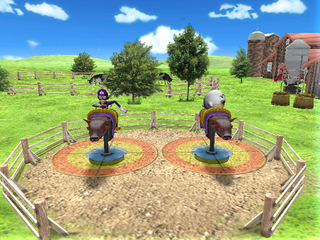 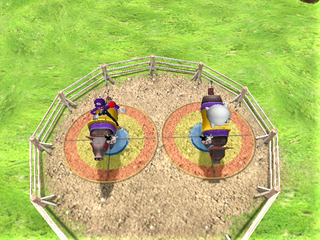 Players must tilt their remotes in the direction of the mechanical bulls or risk flying off. The last person on the bull wins the game. Incidentally, a game with similar rules and controls (but featuring Miis) is found in Wii Party U.

If you view the hotel models in a model viewer you will see these unused textures for where the owner icon should be instead of a blank icon. The text translates to "Dummy 1" and "Dummy 3".

A placeholder texture for the monitor seen in the results screen after a Party Tent battle.

Three placeholder images using a thumbnail of an early version of Swing Kings overlayed with text, intended for the three unused minigames. They translate to Mini game 09, Mini game 13, and Mini game 53.

Thumbnails for all eight bonus minigames exist in the .bin file, but are never used in the minigame roulette, as these are accessed exclusively through the Extras Zone.

There also exists in the same .bin file an unused graphic for the minigame roulette, titled '1-Player Minigame'. It's most likely this were what Challenge Minigames were referred to earlier in development.

A red box with an 'A' button and Japanese text next to it that translates to "Stop", that probably would've been used to stop the roulette wheel that appears in certain minigame modes.

While technically used for the ballpit's wall, the rest of the texture is not used by any object, thus making it unseen. The unseen portion of the texture is actually an early version of the playroom this minigame takes place in! Compared to the final version, the walls are more colorful & vibrant, the curtains for the window are yellow instead of blue, and some textures in the sheet are arranged differently.


The most intriguing part of these early textures is what would've been the bookshelf. Instead of featuring books, the early texture features Japanese box art for various Nintendo games such as Mario Party 5, Mario Party 6, Paper Mario: The Thousand Year Door, WarioWare, Inc.: Mega Party Game$!, Wario Land 2 & 3, Mario Kart DS, and even Mother 1+2! There are also what seem to be a few placeholder games (& books?) as well, such as a few named ABCDEF, one simply being called MARIO BROS., one called DICTIONARY, and the rest being blank.

A texture that translates to "Monitor Screen Dummy".

A blank minigame thumbnail, of which there are several.

Every character has an early version of their Bowser Candy outfit, looking more like the real Bowser than the used plush suit.

mdota.bin seems to be an early version of the Fun Bazaar, and has some differences in its models.

The Surprise Wagon had its textures changed.

The Minigame Wagon also had its textures changed. Most interesting is that strange image of two humans dressed as Mario and Toad on the television. It was changed to minigame screenshots.

The Records Board also went through texture changes.

A Koopa Troopa was added to the side, and the top hat's color was slightly darkened. The used one also seems to have some texture issues not seen in the early one, most visibly at the base. 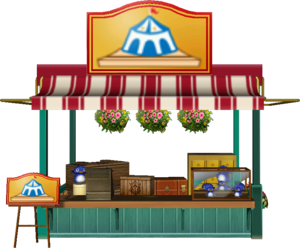 One wagon didn't seem to make to make the final cut. It appears to be based on the Surprise Wagon's model but with different textures and a tank with penguins. Purpose unknown.

Three unused candies are present. The first two have references in the messdata files, while the third is probably a dummy.

The following are their unused names and descriptions:

Judging from Spino Candy's description, it may have been replaced by the Bowlo Candy later in development. 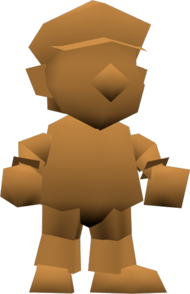 Mario's model from the second game is here for some reason. His texture is a flat color.

A wheel with primitive textures, one side reading first person (ひとりめ) and the other second person (ふたりめ). 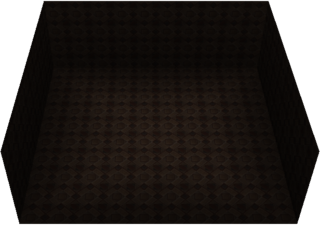 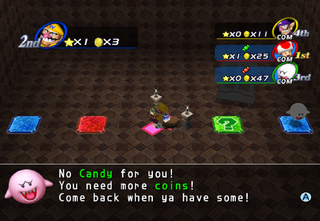 An unused room for King Boo's Haunted Hideaway. It's completely empty, with no doors, decorations, or furnishing. A repeated pattern of a wooden floor is present on all faces of the room. This can be loaded into the game by replacing one of the rooms styles with the unused one, in which case it will load, but decorations and NPCs will be misplaced. Additionally, characters won't be shaded properly inside this room. 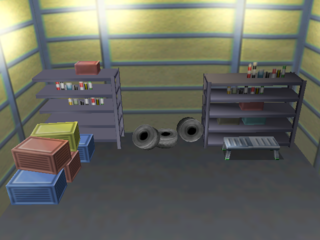 The garage in Bumper Balloons contains objects such as tires and crates, which are never seen in-game since the garage door never opens.

Using the Gecko code 04008524 60000000 in any region of the game will print some information about the current Memory Usage in a box in the upper-left. This debugging feature exists in all Hudson Mario Party games as well. 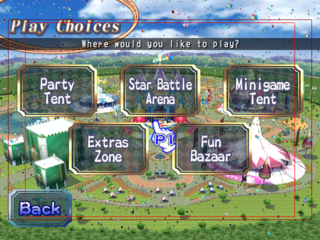 During Shy Guy's Perplex Express, Kamek says, "Magikoopa magic! Turn the train spastic! Make this ticket tragic!". However, since the word "spastic" is offensive in the United Kingdom for being a pejorative term against disabled people, Nintendo was forced to recall all copies of the game on July 13, 2007 from all UK retailers, the same day that the game was intended to launch in the UK. The game was later returned to shelves on August 3, 2007 with all copies having the word "spastic" replaced with the word "erratic".

This incident actually caused enough of a stir to kick off a decade-long trend of Nintendo games featuring completely different localizations for the American and British English releases, dooming people from one region to have no idea what the other is talking about, and making our jobs a lot more tedious than they need to be. Naughty Kamek!

With the Wii set to 16:9, some American and European versions used a maligned graphical border for 4:3 segments of the game. Other versions have standard black bars, since the graphical border was criticized for causing screen burn-in if the game was played for too long.

If the minigame ends in a draw (five minutes elapsed with no victor), the So Sad to Lose theme plays instead of It's a Tie!, which every other minigame (besides the three challenge minigames) uses.