Two unused tracks can be found in the game's soundtrack, which seem to be early versions of the intro/title themes. The segment at 0:50 is the same in the final intro theme, accompanying Bowser's appearance. The second track would be for the title screen following it. Interestingly enough, the beginning of the first track was reworked into the song played in the ending scene after Bowser's Castle is destroyed.

The intro song is actually split into two parts. The first part plays until 1:07 before being replaced by the second part, but the actual song is 1:27 long.

When encountering a Blooper, this song plays; however, only the first two notes can be heard in-game before the battles start, as the game automatically cancels the Blooper text box.

Some songs in the game have unused variations. Details on the Notes page.

It's a sped-up and shorter version of the normal song.

Begins as a sped-up version of the normal song, then returns to normal tempo when the "Chanterelle's Song" segment starts. 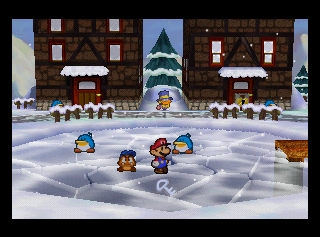 The frozen lake in Shiver City has a third, fully-cracked model that would've appeared if Mario ground pounded the ice three times. Since Mario gets kicked out of the area after the second ground pound and the lake resets upon re-entering the area, the third model can't be seen normally.

It can be seen by performing a glitch or by using a GameShark code.

Fun with palette swapping.
You can see the working enemies in action here.

These enemies appear as living statues in the Crystal Palace, but are never actually fought. However, they can be fought using GameShark codes. They only know one attack, which is a charging ram that hurts Mario. Goombario even has a tattle for them:

A blue Fuzzy. All that's been found is the enemy name and blue palette.

A winged version of the Dark Koopa enemy that was just never used. However, this enemy would later go on to be used in the game's sequel. They too can be fought with GameShark codes. Their attacks are basically the regular Paratroopa's attacks sped up. If jumped on, they lose their wings and become Dark Koopas. Goombario has a tattle for them as well:

This is not the sub-boss with the same name. There are two different entries for Red Goomba in the enemy name table.

This is a Red Goomba with wings. Yep. Red Paragoombas originally appeared in Super Mario Bros. 3, which this game draws a number of elements from.

Interestingly, Whacka has an entry in the enemy name table and a tattle! Based on the tattle, it seems that earlier in development, instead of disappearing after being hit enough times, he would attack. Whacka also crashes the game if he does an attack. 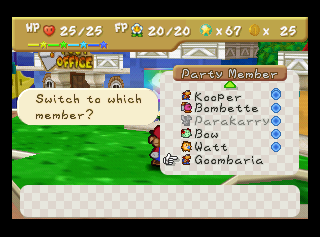 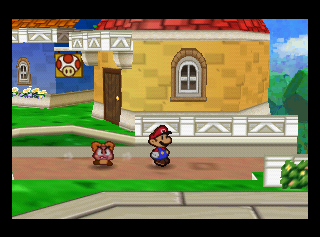 You can add Goombaria as a party member by using the GameShark code 8010F2F4 0001. She'll appear at the end of the party member list (by pressing C-Right) after all others, but with Kooper's icon.

She'll follow Mario around on the overworld like normal party members, but she has no special ability. She'll also show up on the Change Member menu inside a battle, but she doesn't appear to have anything programmed for battles and thus will crash the game. If she is the currently active party member, pressing C-Right to bring up the party member menu will crash the game unless you're playing the Japanese version, in which case an unused option will be spawned but not selectable.

Goompa is technically another 'unused' party member. He does join you at the beginning of the game, but he is not active in battle. However, by switching a status flag, or by performing a glitch known as "Goombario Skip", you can make him active. He has up to 4 abilities, but none of them are programmed in so they do not function. Just like Goombaria, if he is active, pressing C-Right to bring the party member menu will crash the game unless you're playing the Japanese version.

Twink, who is normally alongside Princess Peach, can also be alongside Mario. If he is the currently active party member, like Goombaria and Goompa, opening the party member menu will crash the game.

In addition to the short abbreviated map group names, Japanese map group names exist as Shift-JIS text in the ROM. Only "Abbreviated Name" and "Japanese Name" in the below table are from the data in the ROM. The rest of it is supplementary. The table below lists them in the opposite order to how they are in the ROM (if the data is interpreted as just a basic struct-like list).

This message has the distinction of being the very first message in the ROM, making it, most likely, a test. That blank area in the Japanese script is a single space character.

Like Chan and The Master, Lee has an opening line for his battle with Mario. Instead of using it, though, he goes straight to his copy ability, which uses a different line.

This comes right after the text for the sign by the Li'l Oink Farm. 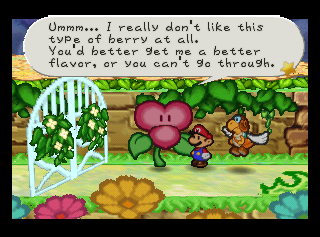 Supposed to be spoken by the Red Flower Gate Guard in Flower Fields if he were given a Yellow or Blue Berry. They're impossible to obtain before going through his gate, making this unused. You can still see it by hacking either berry into the inventory.

An unused string located among the list of enemy names. Presumably, the holes that the Monty Mole enemies pop out of would have been possible to target, but this is impossible in the final game.

An unused command for the Strategies menu that doesn't appear to have any functionality associated with it. While the English is kind of ambiguous, the Japanese name (あとで こうどう, "Act Afterward") suggests that this would have deferred Mario's turn and let the enemy go first.

These dates are in plaintext, unlike most in-game text.

This plaintext date is the same in all versions of the game.

At the end of the game's prologue, Mario recieves the Lucky Star and the ability to perform action commands, which can be used by Mario, his partners, and even bosses. Most attacks cannot normally be seen being performed without the action commands enabled. Some attacks do work correctly, but others have strange side effects:

A few select items were intended to be used on partners. These items are the Mushroom, Life Shroom, Super Soda, and Tasty Tonic.

Why these functions go unused is uncertain, but they still exist in-game and function properly.

There is a name string, icon, and some unfinished functionality for a "Defense" command similar to the one from The Thousand-Year Door (which replaced this game's "Do Nothing"). Modifying some memory when the Strategies menu is open will allow it to be used. Mario flips through a few animations when used at first but then goes into a defensive pose. It functions completely as well: it lowers damage taken by one, and you can time your block to reduce the damage by one more point too! Why this was ultimately scrapped is unknown. 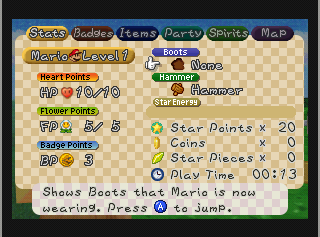 While impossible in normal gameplay, an equipment status for not having any boots on (similarly to the hammer at the beginning of the game) exists and can be enabled with the following GameShark codes:

It doesn't prevent Mario from jumping in the overworld, but it does keep him from using it to get First Strikes, and the command is disabled in battle (saying there's nothing to jump on, even when that isn't the case).

By using the Badge Duplication glitch or GameShark codes, it is possible to get badges into the normal item inventory. This allows badges to have normal item behavior, including the ability to sell badges. Strangely enough, all badges have set prices, despite being unable to sell them without using exploits. Some of these badges are available on Rowf's Badge Shop and have the same price there as they have here. This could mean that at some point, either all badges were meant to be available at said badge shop, or that regular badges could be sold at regular item shops. Badge selling was eventually fully added to Paper Mario's sequel, Paper Mario: The Thousand Year Door.

Parakarry's Air Lift has a chance to instantly defeat a random enemy. However, it automatically fails against spiky, fiery, and electrified enemies, so some values go unused. 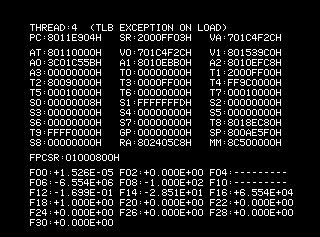 Paper Mario has a crash handler similar to other N64 games by Nintendo (such as The Legend of Zelda: Ocarina of Time). It can be accessed by triggering a fatal exception through exploiting one of the game's various glitches or through tilting the cartridge. Although it only appears to be triggered in the North American version, the error cause texts and other data related to the handler can still be found in the Japanese ROM at offset 0x73210.

The rest are values from the floating-point coprocessor: 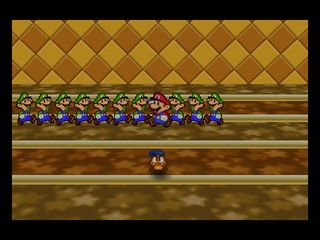 In the Smash Attack mini-game, one of two mini-games found in the Playroom, ten(!) Luigi actors are loaded underneath the room. Paper Mario stores all of a room's actors out-of-bounds when not in use; however, Luigi is never seen in this room. The fact that there is not just one, but ten Luigi sprites loaded in the room heavily implies that Luigi would have originally popped out of a block instead of a picture of Peach.

Many objects in the game that require movement only for cutscene or aesthetic purposes use pre-existing actors to control their movement. The actors used to control the movement of these objects are not meant to be visible, but can be made visible through hacking.

Examples of objects controlled by actors include:

Objects that can be shaken by Mario's hammer, such as trees, can also have Bombette exploded by them for the same effect. Strangely, these two functions are assigned separate hitboxes; even stranger still, the hitbox that can be triggered using Bombette is sometimes not aligned with the hammer hitbox. The most notorious example of this is in the train station area of Toad Town, where the bomb hitbox for the tree that activates the pipe to the Playroom is placed at the opposite end of the room at X: 265, whereas the tree object itself is located at X: -265.

Goombas and their variants have unique "X-ray"-style sprites, which presumably would have been used when hitting one with an electrical attack. While they are used, it is only if a Goomba attacks Mario while he's wearing Zap Tap. No direct electrical attacks will trigger the sprite.

No other enemy in the game has an equivalent.