A GBA tie-in for the GameCube's Mario Power Tennis, this game removes most of the Mario characters to make room for the story mode, which takes place after the Game Boy Color Mario Tennis.

Your goal? Become the best tennis player ever! 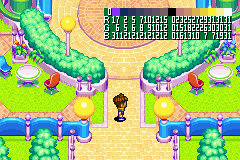 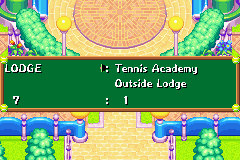 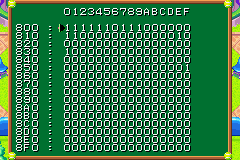 These features are unique to this game: 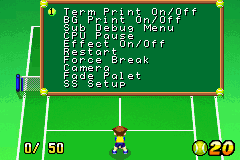 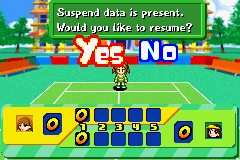 There is data present that proves Chet, Sass's doubles partner in the Island Open, was to be a playable character. However, his programming is incomplete. He appears in the match as a distorted, colored square, and said square actually has Clay's sprite present. Also, Chet can't hit the ball far at all. Even with a "NICE!" shot, it still only moves forward a few inches. As a result, Chet is completely unusable. Also, the only unused graphic associated with this is his player icon.

There are also two other player slots, possibly for two of the other three Island Open players that can't be unlocked. The slots are labeled "08" and "47", respectively. Their icons look like placeholders, and their playing is the same as Chet's.