Mario Party 3 is the last Mario Party game released on the Nintendo 64. If you've played the previous two, you should know what to expect, though having a high M.P.I.Q. is recommended. 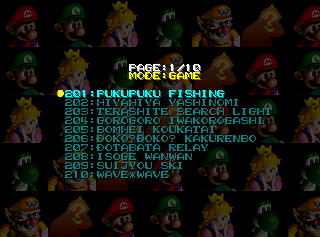 The game has two separate debug menus, both with different entries. Use the appropriate code for your region and either hold L for the first menu, or R for the second. Functionally, they are largely the same as the debug menus in the first two Mario Party games. Since the menu so closely resembles the one used in Mario Party, including the background with the "missing" Donkey Kong render, it is likely that they either re-used the debug routines, or simply used the same engine for the first three Mario Party games.

This large list contains all of the game's Mini-Games, and then some. Selecting a Mini-Game with A goes to the character select screen. Press Left/Right to choose your character, A to confirm your character, and Start to start the Mini-Game. Pressing the R button changes the game mode between GAME, BOARD, and DUEL. Some entries will only work with certain game modes.

Pressing Z opens an options menu, where you can set the following player options: 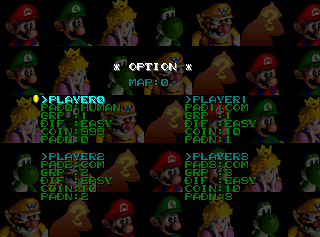 Though MAP is also an option, it does not seem to change.

From this menu, the following debugging tools can be accessed. 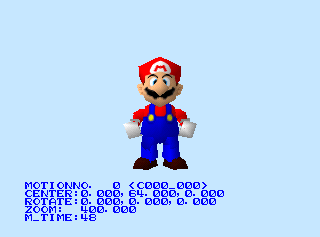 Selecting 300*MCHAR on the first debug menu sends the player to an animation test menu for each of the playable characters. To exit this screen, hold the L and R buttons.

The controls in this menu are:

A screen that can display all the text in the game is selectable from the second menu in the American and European versions, labeled ***:MESS. In the Japanese version, this menu will first display all of the screen transition animations and also features all six of the playable characters minus Daisy and Waluigi.

A, B, L, and R all cycle through the text. C-Up and C-Down change what event's text is shown. 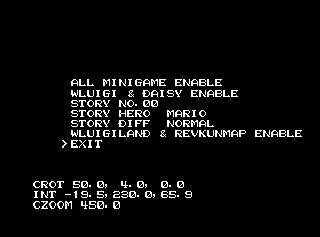 This menu doesn't appear in either debug menu and must be loaded directly. Use the above scene modifier for your region and hold Z during a transition to arrive on this screen. This allows the player to alter the game's save data.

Here, the player has the following options:

Press A to confirm the changes. The player can also press the R trigger to show position information similar to that of the model viewer, though as no models appear on-screen here, changing the position with the controller does nothing. 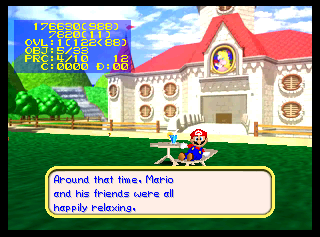 This box appears yet again, unchanged from the second game. 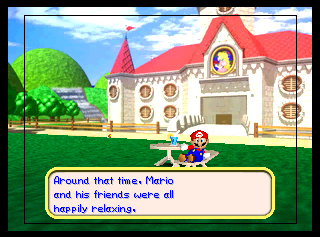 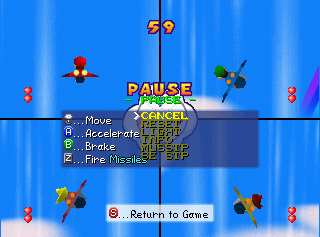 CANCEL unpauses the game. RESET ends the Mini-Game in a draw. LIGHT allows you to edit the lighting and fog using the C Buttons. INFO toggles the memory usage infobox (see above). MUSSTP stops all music. SE STP stops all sound effects. 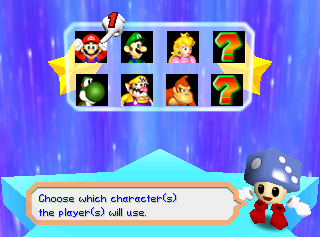 Normally, Waluigi and Daisy are available as playable characters at the start. However, if the game is forced into the menu with an uninitialized save, Waluigi and Daisy will be unselectable during game setup, being represented by an otherwise unused question mark texture. Activating the following GameShark code before the game is started will force the player to the setup screen, bypassing file selection. From this state, entering the Debug Settings Menu and enabling the characters will make them appear normally.

Interestingly, the back of the box alludes to this, reading "You can even unlock new characters in the one-player challenge."

English Mario Party 3 versions still check for devkits at startup. It first checks for KMC at 0xBFF00000 twice which is used in Partner N64 devkits. After that, it checks for the IS64 string if it fails which is the Intelligent Systems Viewer 64 devkit. It's unknown whether the game actually prints anything to the IS Viewer or the Partner N64 Devkits. Nemu64 will complain about reading from these areas and crashes the game soon after boot when checking for the IS64 devkit. If the second check for KMC passes, the game crashes due to a jump to an invalid address. 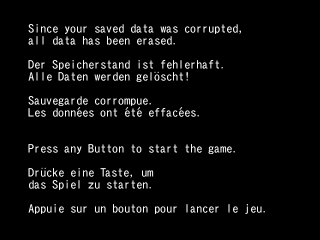 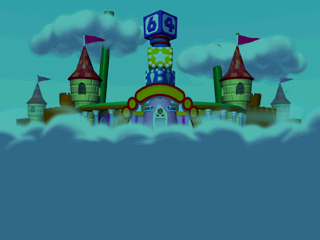 These graphics are unused in all versions and were used in Mario Party 2. Only graphics remain of this screen.

Icons meant to represent scores for games in Story Mode. In the final game, the lowest rating the player can receive is C.

These two icons can be found near the used ones. They don't quite match the art style of the others.

The icon used for unlockable characters, of which there normally are none. 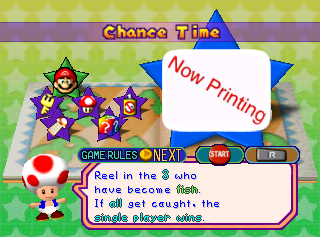 A placeholder Mini-Game icon similar to the one in Mario Party. This can be seen by forcing the game to load Chance Time as a regular Mini-Game by using the following GameShark code.

The Stacked Deck mini-game contains an earlier version of the Toad card which uses a different art style.

An earlier, simpler version of the Monty Mole can be found among the graphics for Storm Chasers.

This graphic is used for the flower stems in Picking Panic but is never visible on-screen.

This odd graphic can be found among the graphics for the Star Lift.

Along with the other character images used for transitions is this picture of a Koopa. Since Koopa doesn't host any Mini-Games in this title, it goes unused, besides being in the Japanese message check. It matches the image of a Koopa used in the backdrop of duel maps.

A map icon for a Snufit, likely intended to be a partner in Duel Mode. Its model still exists too.

An updated graphic for the unused Picker item from Mario Party 2.

An earlier version of the Skeleton Key graphic which is based on the Mario Party 2 design.

One of the early Star Block graphics for Bowser's Magma Mountain.

A small icon of Mario.

The Bullet Bill and VS graphics that appeared before the Mini-Game roulette.

An early version of Waluigi's model, with different proportions and a lighter texture.

A Snufit that was likely intended to be a partner in Duel Mode.

The model for the test map from the first Mario Party. It's unknown if it can still be accessed in-game in Mario Party 3.

An unused slide present in the same directory as the test map.

The numbered blocks left over from the first Mario Party.

Unused objects left over from the first Mario Party.

An earlier version of the character selection which features the early icons for Daisy and Waluigi.

A very early version of the Boulder Ball map.

A 3D version of the background in Pipe Cleaners exists but only the 2D version is ever used.

This test tune is once again the first song in the ROM, though it sounds slightly different compared to the first two games. 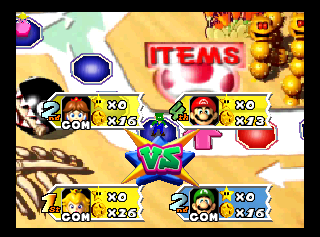 Yellow Player Panels can be found as a still-unused holdover from the first two games. They function like they did in Mario Party 2, ending the turn with no Mini-Game, but continuing the game past its normal length on the last turn.

The following GameShark code can be used to force each player to this state: 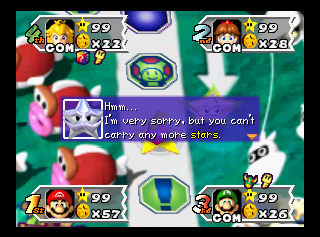 If you somehow manage to get 99 Stars in one game, when you meet the Millennium Star, he'll tell you that you can not have any more Stars. Although the message isn't unused, it's very unlikely that anyone has ever seen it without cheats.

If you pass Boo with 99 Stars, the option to steal a Star will always be greyed out. Unlike the first two Mario Party titles, the AI will not attempt to select it, so no softlock will happen.