Mario Kart Arcade GP 2 is more or less its predecessor but with extra content. 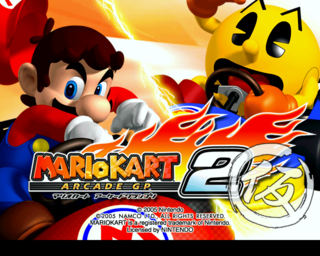 tpl2_tes_title_BG01.tpl is an early version of the title screen, using art assets from the previous game.

Pieces of concept art for Waluigi Stadium and Yoshi Park can be found.

There are numerous images meant for testing the UI system, two of which contain photos of an unknown developer testing the camera function.

In addition, this game carried over three JPG test images from the previous game: camtest00.jpg, camtest01.jpg and camtest02.jpg.

The unused LOD models from the previous game are still intact, but Waluigi and Mametchi, who were added in this game, just use duplicates of Mario.

These build dates appear in the extracted ISO files.