Mario Party returns for one more Wii installment! Hudson Soft, however, does not.

The game changes up the typical Mario Party gameplay a bit: coins can't be collected, you collect Mini Stars instead of Stars, and everyone moves around in a single vehicle, much like Mario Party Advance.

But it's still got mini-games!

An early Toad Road stage can be found on the disc in the folder /common/bd00.

Note that unlike the final version's course maps, this is all loaded in one chunk. The final game's boards have separate chunks for each "section" of the level.

One of the most obvious features is that there's only one branching path in the stage—the fork in the road by the large star in the west portion of the map.

The start of the board. The star marker at the start was changed in the final game to look like it's growing out of the dirt instead of just being slapped on.
A ditch where a bridge would be is replaced by two tree stumps in the final game. 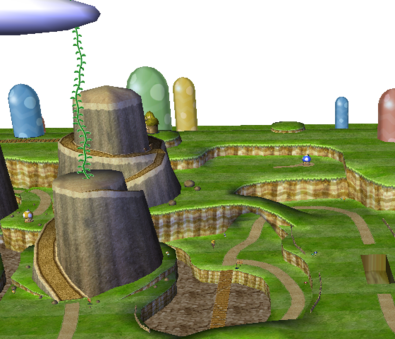 The prototype version of Toad Road has three mountains, not two. The third mountain (where the vine grows) was replaced with a hill surrounded by a spiraling "staircase". The bog standard bridge was replaced with lily pad platforms. 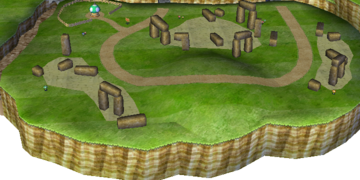 These ruins don't appear in the final game at all! What's more, they're part of the main path. In the final game, this was replaced with a small island that's completely separate from the main area. 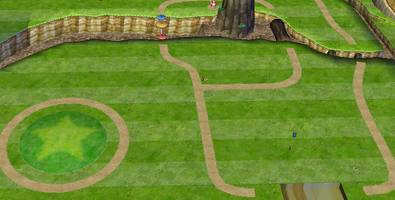 The lower-left corner of the map is where a special Mini-Star filled area can be found. In the final this is on an island that's in the center of the main path, but this early version is completely removed from the main path and is landlocked.

The strange mushroom platforms (which aren't scaled correctly) leading to the boss room are completely absent from the final game, as is the space ditch where a bridge would be. 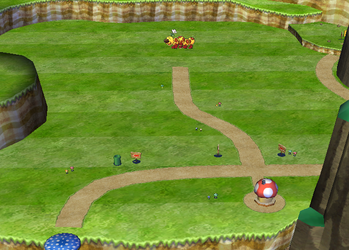 A picture of Wiggler marks where the Boss Gate is found in the final game. It seems that even in this early model, Wiggler was intended to be the boss of this board. Of course, the actual Bowser Gate isn't present at all in the early model. The image used for Wiggler is the official artwork from Super Mario World.

Texture difference between the prototype and final level models.

Textures are stored in the file /common/board/pictures/mass.brres.lz

Textures are stored in the file /common/board/pictures/mass_mini.brres.lz

The "stop" texture is blue (helpful) in the mini-icon model file and green (event) in the final icon file.
Given the texture name compared to what it does in the final (Captain Event space) it's clear that the actual purpose of this space was changed.

A placeholder card icon for the Dry Bones boss mini-game from mg9603/map.brres.lz.

A very basic placeholder model of a penguin, found in the "Polar Extreme" minigame files. Has no animations assigned.

A balloon with the word dummy crudely written on it found in locale_us/en/mgm/layout/mgm_roulette_lc.lz/dummy.tpl in the USA version of this game.

Another balloon with the word mask crudely written on it found in locale_us/en/mgm01/layout/mgselect_lc.lz/dum_f.tpl in the USA version of this game.

Bowser Jr. has unused animations for using a vehicle. These may have either been for testing or he was going to be playable at some point.

The game is internally titled 9Stars given by the sound archive name and message project name, ns, likely short of the latter.