Mario Party DS sticks far closer to the tried-and-true format of the console games, unlike its GBA predecessor, which is to collect stars in order to obtain Superstar status and play against a boss. There are 5 playable maps and 72 minigames. This is also the last Mario Party game to be developed by Hudson Soft. 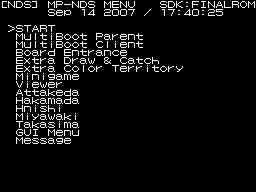 There is a hidden entry in the main menu that goes to a debug menu.
The debug menu is displayed on the touch screen.

Use the Action Replay code for your region to access it:

In the main menu, select one of the options using the touch screen or using the D-Pad and press A once, then press Select.
"Touch to start!" or a text string with the same meaning for non-English languages will appear twice on the upper screen, then press either A, OK or the entry previously selected on the touch screen.
The main debug menu can be navigated using the D-Pad, as an entry can be selected by pressing Up/Down and the selected entry can be opened by pressing A.

If an entry leads to a submenu or a game mode, pressing B will reload the main debug menu (excluding some cases, see below).
Some entries crash the game because their content was removed from the ROM.

In the USA Kiosk Demo even trying to access the main debug menu crashes the game. 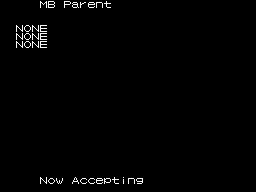 Sends the multiplayer game to clients using DS Download Play, the MultiBoot Client entry or both.
It works and the player that used this will have "WID:0" in the lower right corner of the bottom screen after successfully connecting with other clients and it will be sent back to the main debug menu. 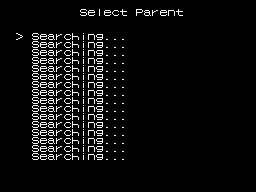 Briefly displays "Press Button A to start" and "Now working" sequentially on the touch screen, then searches for parents.
This presence of this option is odd since multiplayer can normally only be accessed through DS Download Play.
Surprisingly it works perfectly (except for one issue, see below), and lets you play a multiplayer game through multi-card play by selecting Board Entrance or Minigame after being sent back to the main debug menu.

A major benefit to playing multiplayer this way as opposed to Download Play is how load times are dramatically cut down from literal minutes to just about a second due to no longer needing to send as much data between the parent and clients.
However there's one big, save-ruining glitch with this mode: the parent player's unlocked boards, records, minigames (including Triangle Twisters), and minigame modes are saved across ALL players save data, which can be a VERY nasty side-effect if it happens to be playing off of a new save.
This feature was probably not implemented in the actual game because the developers weren't able or didn't want to fix this issue.

Starts a game of Pen Pals, known in Japanese as Draw and Catch.
Without using the MultiBoot the first AND second player are controlled simultaneously, but the in-game camera follows only the first, and the other two characters are AI-controlled.

This entry assigns characters to the players using the settings for the Minigame entry:

Every other setting including the play order is overridden and, if players from the same team use the same character, glitch text is shown instead of their team names.
The selected Minigame Set for this mode is All.

Starts a game of Desert Duel, known in Japanese as Color Territory.
Again, without using the MultiBoot, both the first and second player are controlled simultaneously.

Like Extra Draw & Catch, this entry assigns characters to the players using the settings for the Minigame entry:

Also in this case, every other setting is overridden.
Again, the selected Minigame Set for this mode is All. 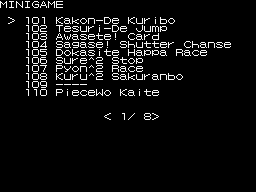 This entry loads a menu for testing minigames and it can be navigated using the D-Pad, as a minigame can be selected using Up/Down and the current page can be changed using Left/Right.
The selected minigame can be started by pressing either Start or A.
To return to the main debug menu also Select can be pressed.

Time Attack (Boss Bash) mode can be enabled or disabled by pressing R and, if enabled on non-boss minigames, it affects only the button that must be pressed to exit from the minigame explanation screen (Y must be used instead of B).

Pressing Y displays four "result coin" values, one for each player, and they disappear when the button is released.
Each value refers to a specific player by its internal number and they change depending of the true type of the last minigame that was played and completed.

Without MultiBoot new records from Player 0 are saved even if its type is set to COM, but no Mario Party points are awarded.

Choosing a Puzzle minigame and exiting after starting the minigame will lead to the final Puzzle Mode menu rather than back to the debug menu.
Triangle Twisters can be unlocked in both Frenzy and Focus Mode by selecting its entry and starting a game, but this is not saved into SRAM. 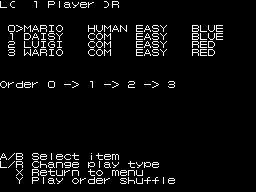 Minigame settings can be adjusted in a submenu by pressing X and pressing it again will return to the minigame list. These settings also affect Extra Draw & Catch and Extra Color Territory entries.

Internally the players are numbered from 0 to 3.
For some reason the minigame type selector is a bit buggy because, on the explanation screen, the name, color and number of players of the chosen minigame type is updated only if the Duel type is selected or if the main debug menu is reloaded without resetting the game.
Without using the MultiBoot, every HUMAN character is controlled simultaneously by the player and setting every character as COM allows to see the game being played by Player 0 (its type resets back to HUMAN when exiting from the minigame) but it doesn't work for some minigames.
Toad is named by his Japanese name, KINOPIO.

Boss and Puzzle minigames use Player 0's character and type.
Playing Feed and Seed with Player 0's type set to COM reveals that the player that normally can only be controlled by a human has an unused and very basic AI programmed to play the minigame.
Interestingly, to advance the introductive text for Feed and Seed when using a COM character, A or the touch screen must be pressed physically.

All the others, including Puzzle minigames, simply force the character to be human-controlled.

It's unknown what kind of in-game content was meant to be viewed using this menu.

The name refers to Atsushi Takeda, one of many people credited as "Program".

The name refers to Syun Hakamada, another person credited as "Program". 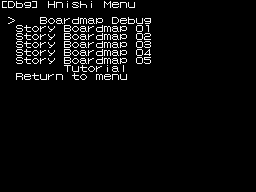 Begins a Party game on the desired map.
Exiting a Party game started on this menu will lead to the final main menu, not back to this entry, and the current progress is saved into SRAM.
For some reason it crashes in the American and Japanese versions.
Strangely it doesn't read the settings for the Minigame entry but without MultiBoot it sets the first player as a human-controlled Mario and the other players as AI-controlled "Normal" Daisy, Luigi and Wario.

There's an option called Boardmap Debug, probably for a debug map, but there isn't any reference to it in the file system, so it crashes when trying to load it.
Also, the Tutorial entry displays the tutorial instructions, but can't be played.

The name refers to Hidenori Miyawaki, again one of many people credited as "Program".

The name may refer to Tetsuharu Takashima, one of many people credited once again as "Program", or to Suguru Takashima, credited as "Planning".

Probably this entry was used to test in-game menus.
Another instance of the internal use of the word GUI is in the name of the dependencies for the boards' minimaps, as they're named "mbgui_dep_LZ.bin".

The debug menu features a build date which differs between versions.
It can be found in the ARM9 binary along with the other debug menu text.

In data\cfi_data_LZ.bin and data\cfi_128k_data_LZ.bin, among the graphics for dialogue box mugshots, an unused image of a Boo can be found. While a Boo has been playable in previous Mario Party games, the fact that only a dialogue graphic exists suggests they were meant to be an NPC instead. In the final game, Boos only appear in two minigames, Boo Tag and Peek-a-Boo, and as a collectible figure. 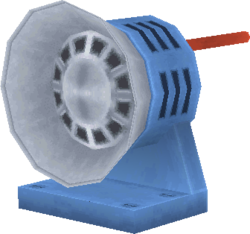 The music box from "Call of the Goomba" has a speaker that can't be seen during the minigame.

In the ROM's main SDAT archive (MPDS_sound.sdat) there are three distinct unused songs that are duplicated many times under various names.
All of them have "MPDS_BGM" set as their Wave Container (in this case instrument sample collection), the one that is also used for the background music of the game.

Probably they were used to test various aspects of the game's sound engine.

Each unused song, excluding duplicates, can be identified by a distinctive Sound Bank (instrument set) name, so below they are listed and analyzed into a sub-section named after it.

Many copies of a simple three note test song can be found in the data for in-game jingles.

It can be found under the name of:

Placed among used songs related to the boards, many duplicates of another unused song can be found:

Another batch of duplicates of it can be found after the minigame music:

It resembles the beginning of the background music heard in underground levels in the SNES version of Super Mario Bros..

The song itself is prerecorded in a sound sample, as the corresponding SSEQ file consists in only a single note playing it.

Interestingly the same Super Mario Bros.-esque reference is also made by the songs used in the minigame Boogie Beam.

An unused song that is completely different from the other two can be found three times consecutively in the ROM, before the music used for the minigame results screen:

The song itself is made by repeating many times 2 prerecorded samples, then altering one of them at the end.

Due to South Korea banning gambling and its elements in video games, there are a number of changes made to the Korean version of the game.