The NES Mario Bros. is a port of the arcade game, minus the intermissions.

A "BONUS COIN" graphic. It's a more plain version than the one seen in the arcade version during the first stage intermission, but since this port doesn't have the intermissions, it goes unused. Maybe it was intended for the coin tally screen?

Interestingly, this graphic was removed in the "Classic Serie" version. 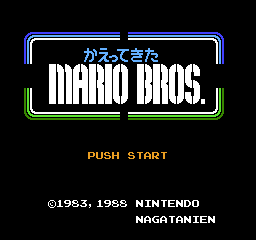 A Famicom Disk System remake, released in 1988 exclusively through the Famicom Disk Writer (making it one of the few FDS titles to not be sold as a standalone product). It was sponsored by Nagatanien, a Japanese food company, and even features advertisements for their products starring Mario and Luigi (and also enka singer Saburo Kitajima, who starred in television commercials for Nagatanien). This remake has two modes: "Original Mario Bros." and "Nagatanien World".

Original is classic Mario Bros. with a few changes: upgraded graphics and music, controlling your jump in midair, new levels, and saving your high score.

Another interesting feature of this remake is name registration: Players 1 and 2 may register their name, age, and gender. These are used when a high score is broken, and to refer to players with honorifics appropriate for their gender.

In 1993, an enhanced version based on the Original mode of Kaettekita Mario Bros. was released in Germany and Italy under the label "Classic Serie". In addition to the aforementioned graphical and gameplay enhancements, it restores the missing stage intermissions and adjusts the music and gameplay speed to match the 50Hz PAL refresh rate.