The third title of the Mario Artist suite for the ill-fated 64DD, used to transfer content from the other entries (Paint Studio, Talent Studio, and Polygon Studio) to an online service.

During the 64DD logo screen, hold B + C-Right + D-Pad Left until the Debug Menu appears.

You can select with the D-Pad or the C Buttons, and press A to select. The full list is the following:

You will then see the version number and the background color will change slightly. 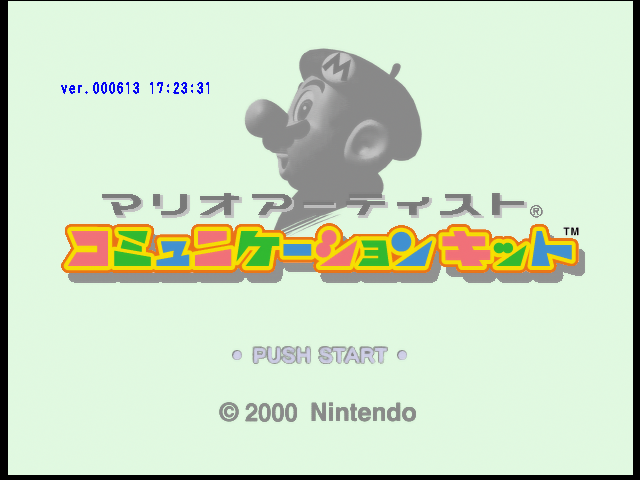 USING THIS MENU WILL ERASE DATA FROM THE DISK, USE IT AT YOUR OWN RISK. This can be accessed on the title screen by pressing D-Pad Left and all C Buttons at once. 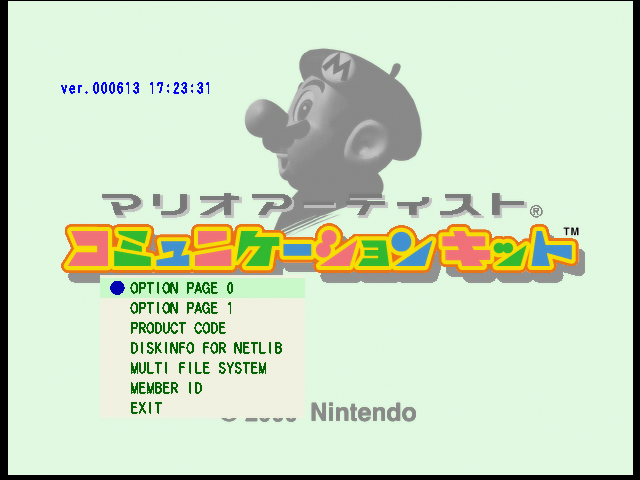 It supports the unreleased 64GB Cable shown at Spaceworld 1999. If detected from one of the controller ports, the game will unhide the Game Boy Printer (Pocket Printer) icon in the main menu, near the Bonus Contents icon (which may be hidden).

Nintendo seems to have formatted every Communication Kit disk with a preformatted save data, which accidentally contains a bunch of data of deleted files that can be recovered.

It should be known that Sound Movies cannot be made in Mario Artist Talent Studio, it is a format that only Nintendo themselves could make. The only other known Sound Movie is the Hidden Movie from Talent Studio with Hiroshi Yamauchi.

These pictures can also be found within the unused preformatted save area. Some of them are from the Bonus Content menu, and are omitted from this list.

Press B at the title screen, then C-Up after the credits begin. This will show your cursor on the credits and when you press A or Z, you can shoot roles and names to change them to Katakana or Hiragana. This cannot be done in the other Mario Artist games.

This has some intended glitch effects on the names, and by pressing C-Up you can also click the names, different sound effects will occur and a score will be shown at the end.

This is a full fledged minigame where you have to hit as many names as possible while juggling with the S T A F F letters to not fall into the bottom of the screen for score penalities.