Of the four Advance ports, it is arguably the least different from the source material, being an almost completely straightforward port with the only major additions being some new Extra levels and added voice lines from Yoshi's Story. Even the music sounds about as close as it can sound to the original.

Because it is for the most part a straight port, most if not all of the unused graphics from the original game remain.

Alternate (and strange-looking) versions of the Hint Box. Its expression never changes in-game.

The unused ? Block from the SNES game, now with 3 extra frames lifted from the prototypes.

The original title of the game is still stored in the title screen graphics, with its palette intact.

A big white box with a black X in the graphics of the island.

With exception of the Red Bullet Bill, all of the SNES unused sprites and behavior remain unused in this port. However, sprite IDs F1 (Egg Plant that spits bubbles) and 162 (two platforms spiky on one side with a rotation block between them) no longer exist in this version.

One additional unused sprite is found exclusively in this version:

There is an autoscroll command that is not used anywhere and is not associated to any sprite. The same command is also found in the original game, although it seems to be a leftover from the ys_rom_0_D prototype. The autoscroller command is as follows:

Room ID EA (the fourth area of Secret 4: Fight Toadies w/ Toadies) has a unique special behavior where stationary sprites can stand on moving platforms. Bullet Bills Shooters however, are a special case: if the sprite is standing on the right edge of a moving platform, it only appears if you come from the left side. If it is standing on the left edge of a moving platform, it will only appear if you come from the right side of the screen. If it's standing in the middle, it will always appear. Since this room uses an autoscroll that moves the screen from left to right, only the Bullet Bill Shooters placed on the right edge of a platform can be seen. 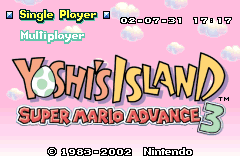 On the SMA3 title screen, a build date can be revealed for a few seconds by pressing this button sequence: Up, Down, Up, Down, L, R, Left, Left, Right.

While the displayed time stops at minutes, the seconds also exist in the data:

There is no build date present in the Chinese version. 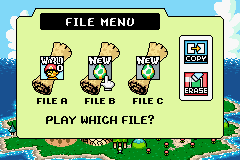 While not unused, it's unlikely that any normal player not knowing about this would ever see it. The "World 0" icon can only be seen if you get a Game Over during the intro level, at which point your progress (or lack thereof) is saved.

No equivalent exists in the SNES version, since you are given an infinite number of lives on the intro level. Even setting your lives to zero via cheat code and then getting a Game Over will display only an empty file; the game does not save World 0 to SRAM.

As with the previous game, the graphics designers at NoA must have been out to lunch or something while this game was being localized, leaving us with this uninspired logo outside of Japan. Like the previous Super Mario Advance games, China's is based from the Japanese title screen.

All of the graphical differences from the original game apply here as well.