New Super Mario Bros. U Deluxe pulls a Mario Kart 8 Deluxe and is an "enhanced" port of the Wii U game that includes the DLC from the start, the ability to switch characters on the fly, a new playable character (Toadette), and...that's it.

Oh, and it also introduced the Super Crown, which the internet soon went crazy over. Whether or not this is a good thing depends on who you ask.

There are 100 levels that were not present in the previous game.

Even though Boost Rush was removed from this version of the game, all of the levels that were present for the mode still exist in the game's data.

Zone 1 is very unfinished, as the tiling was not complete. It contains pipe exits and entrances, a pipe cannon, rotating coins, brick blocks, and some location-triggered coins. There are no enemies.

Zone 2 is very obscure, as it has no clear purpose. It has Paragoombas and Paratroopas, but no ground. There are rail tiles that are in rows. The zone is very tall, while the top is the only part of the zone that has sprites. The bottom of the zone has ground tiles laid out on the bottom-left part.

An area that is in the sky. It only contains one zone.

Like Zone 2 in Area 1, it features a very tall zone, which is a whopping 11,616 blocks, while the top part is the only one that contains sprites and objects. The entrance is set for Mario to jump from below, onto the only platform present. An autoscroll controller will move the camera downwards using a path that extends from the top of the zone to the bottom, while one of the green pipes on the right move. However, this level is impossible to beat, since Mario will die before even getting close to the bottom of the zone. 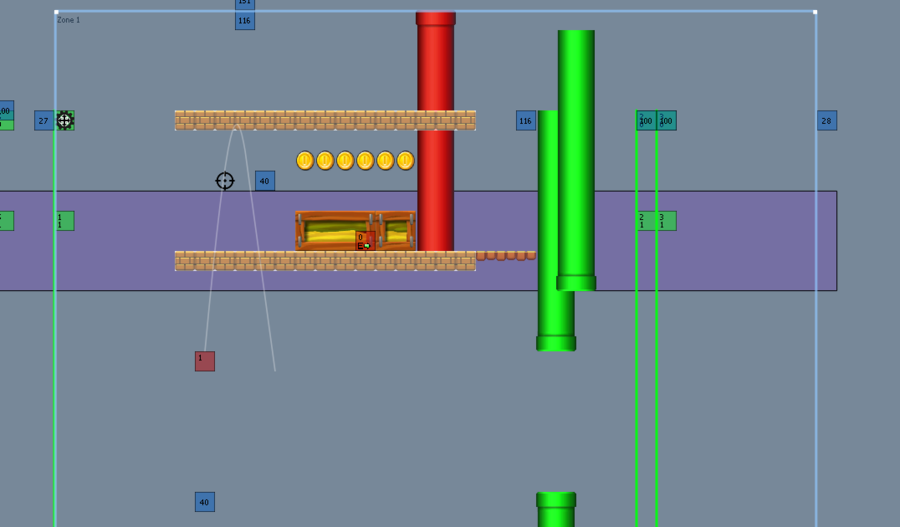 A basic complete zone. It features moving rectangular moving platforms, Fire Bros, and Dry Bones. The pipe at the top of the zone takes the player to Zone 2.

Also complete. This zone is classified as the midway point. At the top of the zone is a door to the boss battle. There are two secret pipes that lead to two Star Coins in this zone:

Zone 3 is a secret area containing a Star Coin. The player has to advance upwards while climbing moving gates. The Star Coin contained in this zone is the third one. 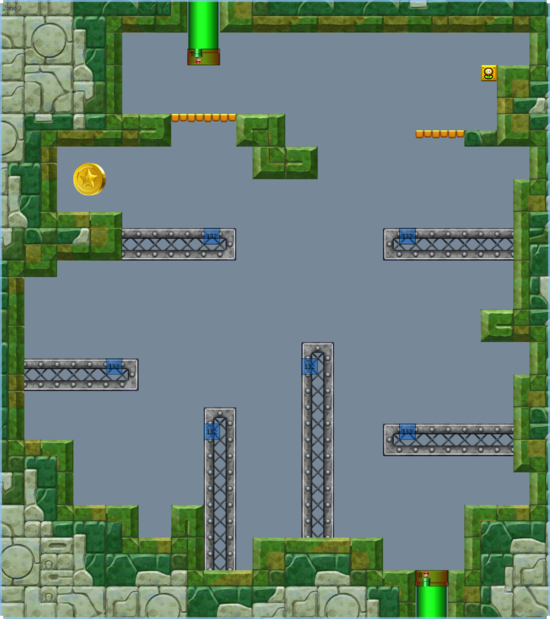 Another secret area containing a Star Coin. This one is more straightforward, as it is a simple climb up. The Star Coin contained in this zone is the second one. 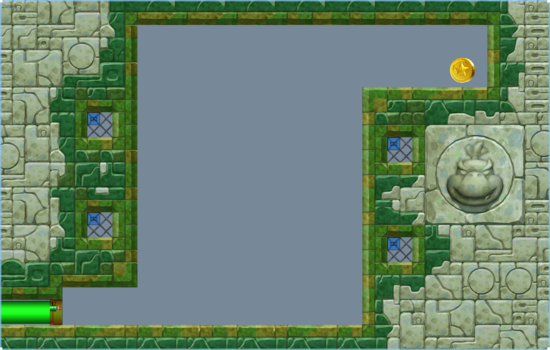 Another underground area that contains crystals and poison water.

40-2.sarc contains a sky-themed level that uses the correct sprite IDs. However, it is very unfinished. The level contains two zones:

40-3.sarc contains an underground-themed level with poison water. The level contains three zones; Zone 1 has rotation-controlled crystal blocks. Zone 2 and 3 are very similar: they only contain widely spread-out platforms that are impossible to jump to. Another area is a forest-based area, which is used to test the extending poles from Soda Jungle.

A level that takes place in Sparkling Waters. Area 1 contains geysers which have an unused mechanic which allows for the geysers to push up pipes. This area can be beaten. Area 2 is a tower that contains a stack of barrels, Fire Bros, Cooligans, and Spikes.

40-5 contains a desert-themed level. It contains Stone-Eyes that are tilted to get farther in the level. However, this level is unfinished, as it has missing wall tiles. This level seems to be beatable.

A nearly-finished version of "Fire Piranha Plants On Ice". The only change is that the first Star Coin wasn't moved to the underground section yet.

An early version of "Haunted Shipwreck". Notable changes include more Boo Circles, boxes in the water, and the last area does not scroll.

A possibly early version of "Seesaw Shrooms" that differs immensely from the final version of this stage.

This level is an almost completed version of "Walking Piranha Plants!", with the only changes involving the placements of question and brick blocks. Area 4 seems to contain an incomplete version of Tilted Tunnel's start area.

40-11 seems to be like an early version of 1-2 on the final game, but it crashes the game for an unknown reason.

Just like 40-11, seems like an early version of 1-2, this one is more advanced, but yet not identical to the final version.

This is a stage that takes place in Soda Jungle. It doesn't seem to correspond with anything in the game except for a few of the challenges.

This is an underground ice cavern where you must slide on the ice to get to the end of the stage, just like "Penguin Bowling", a challenge stage. The game crashes when you get the flagpole area, because it isn't defined.

This is an underground cave that contains platforms that move in a square, which can also crush the player.

This is an overground level that is used to test the unused "Rocket Mushroom" actor. There's not much else to this stage, except that it has poisonous water for some reason.

This is another level that takes place in Sparkling Waters that has Cooligans coming from pipes while the water rises and lowers. The tiling of this level seems to be unfinished.

This seems to be an early version of "Fire Snake Cavern" that seems to end abruptly after a few platforms.

This is a castle level that has rotating grey platforms and Grrols rolling down from them. This level might have been the Layer-Cake Desert castle at some point, but it was left unfinished.

This level is a vertical sky level that has Flipruses, Scale Lifts, Pirahna Plants and Spikes throughout the level. This level has a few tiles missing at certain points, but it seems to end abruptly.

This is a level that takes place in Sparkling Waters, containing barrels, Huckit crabs, Deep Cheeps and rising/lowering water. There also exists a lava version of this stage in Area 2, though unfortunately, the barrels don't work properly in lava.

This is a lava level that has slowly rotating platforms and Bullet Bills. This may have been scrapped due to its difficulty not exactly fitting with the others.

This level is possibly an alternate of "Walking Piranha Plants" that has a Lakitu following you and pelting you with Pirahna Plants while you run on conveyer belts.

This is a scrapped tower level that normally would crash the game due to a non-functioning object, LIFT_ZEN_WARNING. It's unknown what this item might have done, but maybe it was going to show you where you stand so you don't get crushed by the platforms. The level does not have a functioning boss, and cannot be completed.

This level may have taken the spot of Painted Swampland at some point in development. The level itself is a dark forest level, similar to Bramball Woods. This level cannot be compeleted.

This is a castle level that seems to take inspiration from Super Mario Bros. 3, since it has blue blocks everywhere, and it uses the Boos in place of the Rotodiscs of the original game. This level cannot be completed.

This is an overground level that has many spikes and arrow lifts. Many of these Spikes seem to be the wrong kind, since they end up accidentally defeating each other. This is yet another level that cannot be completed.

This is a level that takes place in Layer-Cake Desert, and it contains an overabundance of Pokeys, and for whatever reason, Cheep Cheeps that leap out of the sand.

This is a castle level that has many skewers that come down all at once. There is not much else to this level besides that.

This level is another castle level that has those boxes that jump when you jump onto them, along with Grrrols and Thwomps to impose a challenge. This level doesn't seem to be completable.

This is an overground level that has the desert music playing for some reason. It contains many brick blocks that appear and disappear, one column at a time.

This level seems to be an unfinished challenge level that may have involved getting to the other side or maybe getting 1-ups somehow.

This level is an early version of "Mushroom Heights", but it has a darkness setting applied to it, possibly to indicate that it is unused. There are minimal differences between this version and version that is used.

Similar to 44-34, but now there is a Koopa Troopa on a multicolored platform.

An early version of Acorn Plains Way that was seen first in the E3 trailer for the game. There are a few sections that resemble the final version of the stage, but the rest is different.

All of the unused sprites in the previous version are still here and still unused, though the models have been upgraded to the new model format. All code associated with these sprites has also been carried over.

In unused level 33-5, where the tileset is the only thing that still exists, red lines seem to appear over a few of the tiles. These must have been used by the developers to know which piece fits where in the tileset.

Very similar overlays were shown on the Acorn Plains tileset in an Iwata Asks video about the original game. 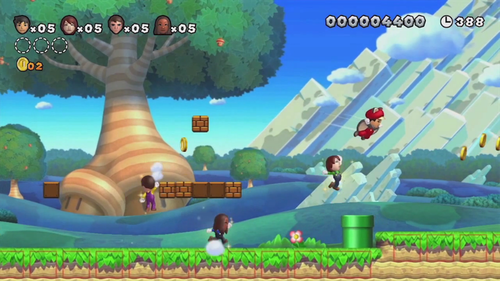 Textures exist for a green Baby Yoshi which goes unused, as it did not exist in the original New Super Mario Bros U. for the Wii U. 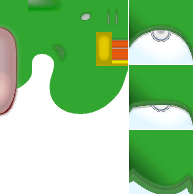 The Purple Exclamation Mark Button and duplicate Peach's Castle icons in the original is still here. But the red pepper and star icons are gone.

Unlike the original game, the spin jump (and actions triggered by the same button/movement) can also be activated by pressing the jump button while in mid-air, but this can be annoying when trying to do precise jumps, so they provided a method to disable it. Oddly, the only way to disable it is through an undocumented button combination - on the File Select screen, press the Left Stick down for about three seconds, and you will hear Nabbit's voice. Then you can start a new file with the function disabled.

Some strings relating to image conversion using the open-source command-line image manipulation tool ImageMagick can be found in the code (ExeFS\main).

The game doesn't use a LayoutMsg or Movie archive.

The internal project name for the game is RedPro-S, according to multiple strings. Much like Captain Toad: Treasure Tracker, the codename is the same as the original Wii U release with "-S" tacked on.

In version 1.0.0 of the Chinese release, all POW Blocks appear to read "]0[" instead of "POW". This could be to comply with China's prohibitions against English words being used in games released in China, though this is speculative.

The texture was switched back to normal in the 1.0.1 update, over a year after the 1.0.0 release.