From The Cutting Room Floor
Jump to navigation Jump to search
This page contains changes which are not marked for translation.
Other languages:
English • ‎français • ‎italiano • ‎polski • ‎português do Brasil • ‎русский • ‎日本語 • ‎한국어

The Japanese Super Mario Bros. 2 is basically Super Mario Bros. with the difficulty cranked to 11. The expanded space provided by the disk format allowed for upgraded graphics, longer and more complex levels, several new gimmicks, and a total of 13 worlds... but overall, it's essentially the same game.

Due primarily to its extreme difficulty and similarity to its predecessor, Nintendo opted to modify another FDS game they had made to present a completely different Super Mario Bros. 2 to other regions. Overseas players first discovered this game through Super Mario All-Stars, albeit in a remade form. An unlockable version was also included with Super Mario Bros. Deluxe, although it did not have the unique graphics of the original release, unique stats for Mario and Luigi, or anything normally accessible past World 8-4.

Non-Japanese gamers did not get a chance to play the original, completely unaltered game until it was released internationally on Wii Virtual Console, and it has since been brought over to the Wii U, 3DS, and Switch. In most of these overseas rereleases, the game is referred to as Super Mario Bros.: The Lost Levels, though the title screen is left unchanged in said unaltered ports.

As with the previous game, RAM address 03F0 keeps track of the number of blocks hit, though no routine ever reads the value stored here.

Two unused ground tiles and a cactus can be found at the very end of the SM2CHAR1 graphics file. The last tile, a more natural-looking variation of the original Super Mario Bros. ground tile, actually appears in every screenshot in this game's manual, suggesting that it was changed very late in development. 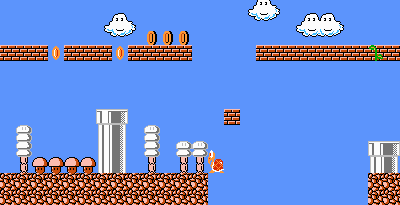 In World 3-1, a Red Koopa Troopa is placed directly above a pit. It's normally impossible to see this enemy in-game, as by the time the player reaches the screen in question it's already fallen into the pit. The only way to see it without hacks is to glitch Mario's position to the furthest right side of the screen, then take damage, which causes the screen to scroll to the right and give the player a glimpse of the Koopa as it falls into oblivion.

In 2004, Super Mario Bros. 2 was rereleased as part of Japan's Famicom Mini series for the Game Boy Advance as "Famicom Mini vol. 21". The most significant change in this version is that A + Start allows you to, after getting a Game Over, immediately go back to the start of the world you died in (barring Worlds 9 and A-D). This not only renders the "Continue" option redundant, but has some other effects:

These changes did not carry over to the Virtual Console and Switch releases, which instead behave the same way as the original FDS version.