Mario Kart 64 basically takes all the wishes and feature requests from Super Mario Kart and makes them come true. Four players! Tunnels! No Koopa Troopa! All good stuff. Except that last one, clearly. 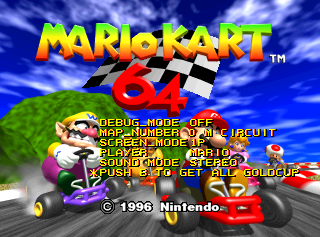 Use one of the below GameShark codes and press L + Z at the title screen.

In the debug build of the game that was leaked as part of the July 2020 gigaleak, the debug menu is enabled by default and can be activated by pressing R on the title screen.

Note that if you try to start a one-player game on a battle map, the game will automatically add a second player. 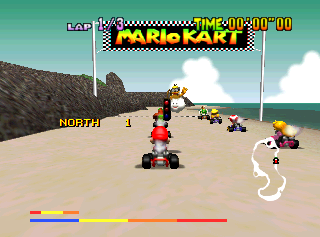 When Debug Mode is enabled, the following GameShark codes can be used:

The following code activates a frame-by-frame advance mode if Debug Mode is enabled:

When the game is paused, player 1 can hold A and B and press L to advance a frame. This unfortunately conflicts with using A to unpause the game; you must hold A before pausing. Alternatively, adding the code 81001784 2400 makes it require only holding B and pressing L while paused. 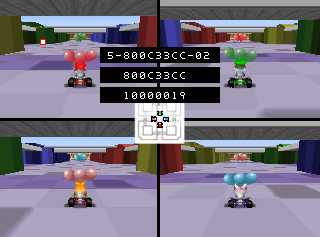 If the game crashes, it will draw a small white square with red border near the upper-left corner of the screen. At that point, pressing L, Up, Left, Down, Right, R, L, B, A will display some information about the cause of the crash.

The GameShark code 810DC6FE FFFF will shorten this code to simply "press L".

This display cannot be seen on most emulators, as most plugins don't seem to continue redrawing the screen after the game crashes. 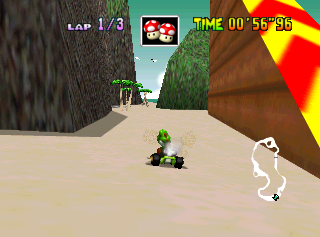 Next to the mirror mode flag in memory (address 800DC608 in USA version) is a floating-point value that appears to always be set to 1.0. When a track is loaded, its height is scaled by this amount. (All polygon vertices are multiplied by this value.) Use one of the below GameShark codes to activate this feature (default value 3F80):

This value only affects track polygons, and hit detection is not altered to compensate for the steeper hills and/or shorter vertical walls, so changing it often produces unplayable tracks and strange effects such as floating trees, low areas being considered underwater/out of bounds, and walls that are no longer solid.

No similar scaling functions exist for the X and Z axes. This may have been intended as a debugging function to test slopes, or a bonus mode that would scale tracks to various sizes. 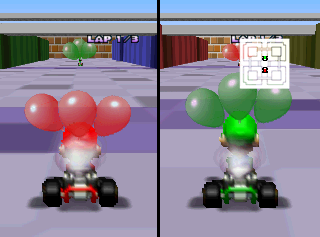 It's pretty clear why this isn't accessible normally: it's unfinished. The lap counter still displays in Battle Mode, the map goes over the second player's lap counter, and the Vs and Es only appear when you're close to the camera.

This feature can be seen in some very early footage of the game, from when it was known as "Super Mario Kart R". 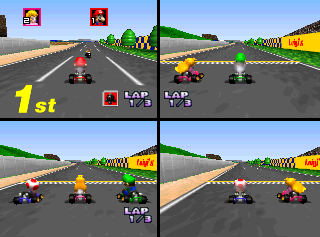 An unused multiplayer feature that warns players when they approach the moving bombs on the track. This can be seen in an early screenshot but was disabled in the final game. It can be re-enabled by using the GameShark codes:

Start up a 3 or 4 player versus race then once in game, press C-Left once and drive near a bomb and then press C-Right until you see the bomb icon.

The player-state code contains a flag indicating a feather jump state is active. By setting the state at 0x0F699E (NTSC-U) to 0x10 it triggers an immediate feather jump on the player. The feather item from Super Mario Kart wasn't included in the final game, though it can be seen in certain prerelease material and in the award ceremony (which is visually similar, but uses a different state flag).

Code from the 2020 Nintendo leaks labels this flag as USE_WING, which shows that this state would have been activated via use of an item, in this case the scrapped feather.

To see this in-game, use one of the below codes and press Z.

Another player-state code has a flag used to trigger a large spinning jump, which can be activated by setting the state at 0x0F699D (USA) to 0x02. When active, the character gets flung into the air in a similar fashion to the feather jump, but with much more height and less forward momentum. The character plays a negative voice line (the same as for a banana spin out) and upon landing on ground, it removes all momentum. By observation and labelling, this was meant to be a negative player-state.

Code from the 2020 Nintendo leaks labels this flag as HIT_STORM, which suggests that this state would have been used for colliding with the scrapped tornado and typhoon hazards presumably found in Kalimari Desert and other courses respectively, for which commented out code has been found.

To see this in-game, use one of the below codes and press C-Down.

The game contains three unused functions, intended for a higher jump or bounce (unrelated to the bounce that happens after landing from the big dash jump on Royal Raceway).

Those functions are for starting, executing and resetting said high jump. They are not called anywhere in the code, but the act of replacing other function calls with them, shows that they are fully functional.

Code from the 2020 Nintendo leaks labels the activator flag which would have called those functions as HIT_HEIGHTJUMP and snippets of code from an early build suggests that this state would have been set when colliding from above with the steam boat on D.K.'s Jungle Parkway. The video shows a recreation and the actual behavior of the height jump.

The game contains six tables that determine the item probabilities when hitting an item box. The first two tables are both for GP mode and determine item probabilities for a human player and a CPU player, respectively. According to the latter, CPU players have a certain chance to get Green Shells, both the single and the triple variety, but the CPU never uses shells at all, so this isn't actually ever seen in gameplay.

Among the menu graphics are two unused options, untranslated from Japanese:

The bomb warning icon that shows when you're close to the moving bombs.

An early version of the traffic light.

The textures for the early item boxes. It's a leftover from Super Mario Kart R.

4 Player HUDs for the multiplayer modes.

While these two sprites are technically used while Monty is preparing to spring out of its hole, the player never sees the lower body while Monty is standing still.

Even though the game has 8 racers, there are unused 0th and 9th position icons for the lap progression HUD.

The bottom part of this texture cannot be seen, as the sign is too small to have the full texture. The full sign can be seen in some prerelease material.

Although present in the game files, this leaf texture isn't used. It was probably meant to fall out of the striped trees, based on its appearance.

The code below replaces the realistic leaves with this unused one, when hitting a tree.

Together with the 360 degree render sprites comes this animation of a Boo, hiding its face.

Boos can be seen floating around in the course "Banshee Boardwalk" yet this specific animation is never used.

Within the texture files is this render of a tree, which is shown to have a unique spiral pattern.

Code from the 2020 Nintendo leaks proves that those trees would have been used in the course "Moo Moo Farm". 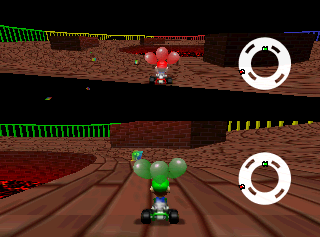 Hidden underneath the Big Donut arena are two misplaced item boxes. These item boxes can be seen by getting the camera behind the green bars and waiting, eventually the two item boxes will float up into view. The stored Z-value of these two boxes is about 100 units less than all the other 22 boxes, causing them to appear below the course.

Since the red, blue and yellow sections of the map each contain six Item Boxes whereas the green section contains four, it's clear that these two Item Boxes were intended to appear in the map.

A Gameshark code to restore the two boxes to the course surface: 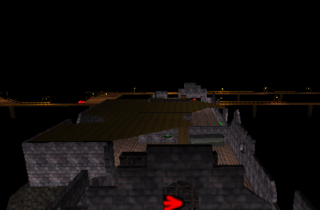 The course "Banshee Boardwalk" contains an unused piece of geometry, which only can be seen in the credits scene by manipulating the ingame camera.

It can not be seen in a regular race, since the game never loads it in via the culling system, however the credits sequence is set up to render every part of the level regardless of its culling state.

The layout and an unsealed part of the ceiling suggests that is has been used in an earlier rendition of this course.

The "Winning Results" track was likely intended to alternate between two ~100 second sections of music, each composed of a 50-second segment repeated twice. Due to a binary counter bug, the first segment repeats, incidentally, 64 times (for 54 minutes and 39 seconds!) before the second segment ever has a chance to play—at which point it repeats twice and correctly returns to the first segment.

Most of this text probably would have been spat out to a debug console on development systems, but goes unused in the final game.