Super Mario Maker for Nintendo 3DS is an impressive port of the Wii U game, though it's missing the ability to upload your own levels (but you could play Wii U ones online bafflingly), with the game claiming: "to have a bigger focus on building smaller communities." Which is to say; "Go outside, and share some levels via StreetPass!". Not to mention; the Wii U levels you can play can only be found via "shuffling" a bunch of random ones in batches, with no "search by ID" feature in sight. Which is to say; "We hate you!". Considering the sequel reinstated the online level uploading functionality and ID-searching feature missing from this port, we think Nintendo learned their lesson...probably. 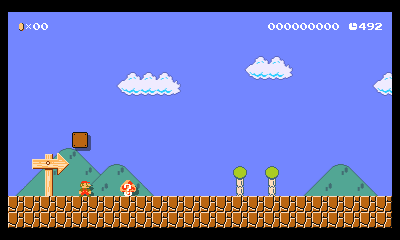 Even though the Mystery Mushroom was "officially" removed from this port, the item is still obtainable in versions prior to 1.03 using a couple of overlooked methods:

Both of these methods of obtaining the Mystery Mushroom were patched in version 1.03, but the power-up still remains (mostly) functional if hacked into a level.

When a Mystery Mushroom is collected, Mario turns small but retains all of the abilities of Super Mario (can break brick blocks, can crouch [

], Fire Flower combined with Super Mushroom will appear as a Fire Flower, etc.). When Mario gets hit in this form, a Super Mushroom flies off of him, likely a remnant of the animation of the currently-worn costume flying off that appeared when getting hit in the Costume Mario form in the Wii U version.

Along with the Mystery Mushroom, another Amiibo functionality, the 8-bit "Big Mario" power-up was also removed. Although the Big Mushroom entity itself and the Modern Mario variation of the power-up state do not exist within the game's code, the Classic Mario state still remains in the 3DS port, however, functioning exactly how it did in the Wii U version.

A single sprite exists for the modern colorization of Mario. Its original filename M1_Player_MegaMario2Mdl indicates that it is a leftover of the Big Mushroom power-up from the Wii U game.

Among the graphics for the different Mario forms exists some utterly bizarre placeholder graphics for sprites that take the form of sprites from other, completely unrelated contexts.

The file dead.0 from M1_Player_SpMarioMdl, M1_Player_MegaMarioMdl, and MW_Player_FireMarioMdl contains a stomped Red Beach Koopa from the Super Mario World style.

The files jump.1 and jump.2 from M1_Player_SpMarioMdl and M1_Player_MegaMarioMdl contain 2 sprites of the Trampoline also from the Super Mario World style.

The file fire.1 from M1_Player_MarioMdl, M1_Player_SpMarioMdl, and M1_Player_MegaMarioMdl is, fittingly, a fireball graphic used for the Fire Bar in the Super Mario World style.

The file fire.1 from M1_Player_SlimMarioMdl. It's Bowser, once again from the Super Mario World style, breathing a fireball.

An unused version of the Super Mario Bros. iteration of a Locked Door. It has no unlock-specific door graphic and the lock stays on the door even when opened. Instead of using a unique design, the graphics are simply a minor edit of the original door, suggesting this was made very early in the Locked Door's development.

Unused graphics for the activated checkpoint flag swinging in the SMB style. In the final game, the unactivated flag is used.

An unused version of Super Mario Bros. 3's Bill Blasters. Like with Lakitu's Cloud, the graphics seem to be from an early version of Super Mario Maker, as the exclamation mark icon uses its sprite seen in the original game's Game Awards trailer, and both Blasters use a more NES-like color palette compared to the final sprite.

Are you starting to notice a pattern here?

An unused version of Super Mario World's Bull's-Eye Blasters. It has a darker color scheme and uses the same exclamation mark icon as the Blasters from Super Mario Bros. 3.

Curiously, the background for the ground theme from early builds of the Wii U version is leftover in this version, downscaled to fit the 3DS's lower resolution. This could indicate that Super Mario Maker for Nintendo 3DS was being developed at the same time as the original game, or this early background was used for testing purposes.

This can be found in the files in the following folder: RomFS>Model>WU_DV_plain

An unused duplicate of the NSMBU version of the Hard Block. This is unused because the game loads the image from the tileset and not from separate .SZS files. The interesting part about this specific graphic is that this file also appeared in the Wii U version (albeit at that game's higher resolution), which means that this may have just been carried over as a result of the conversion process. The other interesting part is that this image has a resolution of 32x32 while in the final, it's 16x16. The same goes for the Wii U version; the original image is 64x64, while the unused file is 128x128.

Present at offset 62EABC in the game's executable (code.bin) file is text for what appears to a debug menu.

The Nintendo 3DS version of Super Mario Maker has an unused Amiibo table in /Mush/BossCharaMarioTable.byaml. As the Mystery Mushroom was put on the chopping block this time around, this table of Costume Mario forms consecutively goes unused as well. Peculiarly, it not only lists the "Golden Retriever" costume from the original game, but it also lists three additional costumes representing Rayman, Roy and Ryu, the latter two having received Amiibo figures some time before the game's release. Additionally, the table was not removed in subsequent updates.