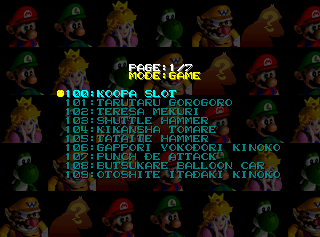 Use the following GameShark codes for your region and hold L on Player 1's Controller while the screen transitions.

Given that the menu so closely resembles the one used in Mario Party, including the background with the "missing" Donkey Kong render, implies they either re-used the debug routines, or simply used the same engine for the first three Mario Party games.

This large list contains all of the game's Mini-Games, and then some. Selecting a Mini-Game with A goes to the character select screen. Press Left/Right to choose your character, A to confirm your character, and Start to start the Mini-Game. Also, pressing the R button changes the game mode. 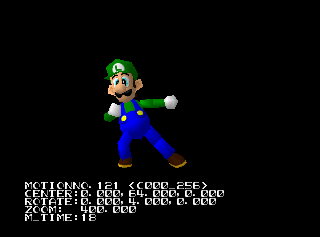 A simple animation test can be accessed with the following GameShark codes.

While the name of this test ("MCHAR") is present in the ROM with other debug screen entries, it cannot be accessed from there anymore and must be loaded directly.

The controls for this menu are: 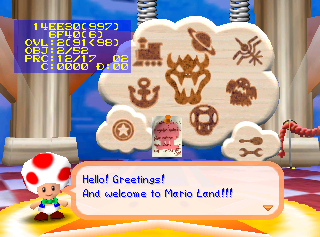 A memory usage infobox similar to the one in Mario Party can be triggered by activating the following GameShark code and reloading the game. Compared to the original game, the C and D values are new, but they seem to always remain at zero. 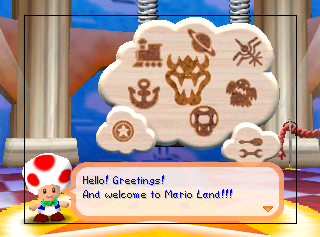 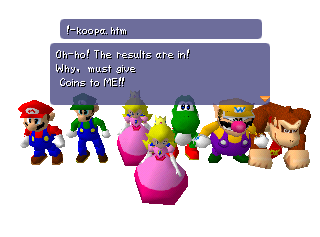 A simple debug menu that allows you to view every message in the game. A, B, L and R will advance through the text. Use the following codes to load this menu on boot. 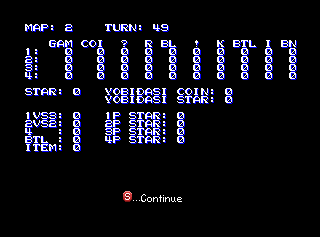 The in-game debug menu similar to the one found in the first game. Compared to the original, there are now references to Battle, Item, and Bank Spaces, along with the number of stars and coins that have been found in hidden blocks. Use the following codes to load this menu on boot. 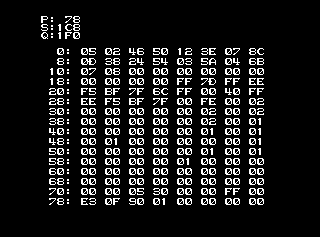 A simple debug menu that allows you to view the contents of the game's save data. Use C-Up and C-Down to scroll. Use the following codes to load this menu on boot.

In the Mini-Game, "Shell Shocked", the code that controls each player's health actually extends up to four hits. It's likely this was the original health the players started at, but was changed to two hits for some reason.

The following GameShark codes for your region will extend everyone's health to this amount when the Mini-Game is played.

Among the graphics for Roll Call, a sprite of Bomberman can be found, very likely leftover from another Hudson Soft game.

Found among the map sprites is a large image of Mario in Western Land. It's the only one this large, as the used ones are half the size.

An early version of the Mushroom Genie background which uses a hand-drawn style instead of the pre-rendered style in the used version.

Japanese logos for the main boards in Mario Party. These graphics aren't present in the original game, so it seems that they were created for Mario Party 2.

The Mini-Game Coaster and Mini-Game Stadium modes have their own logos but aren't displayed.

Present among the graphics for Magnet Carta is this score graphic.

One of the early Star Block graphics for Bowser's Magma Mountain.

The volcanic rocks from Bowser's Magma Mountain that rain from the sky when a Happening Space is landed on.

Unused Chance Time graphics which are the numbers zero through three, written in katakana for zero and hiragana for the others.

An unused font from Super Mario 64.

This graphic was used in the intro for Wario's Battle Canyon for when Koopa Troopa appears. 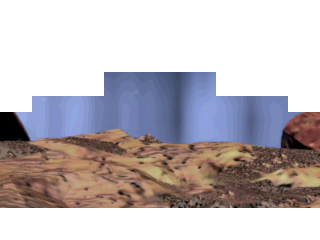 One of the backgrounds from Wario's Battle Canyon.

This graphic was used in the ending for Luigi's Engine Room.

The rainbows that appeared in the ending for Mario's Rainbow Castle.

The model for the test map from the first Mario Party. It's unknown if it can still be accessed in-game in Mario Party 2.

An unused slide present in the same directory as the test map.

The numbered blocks left over from the first Mario Party.

Unused test objects. The first three can also be found in the first Mario Party. 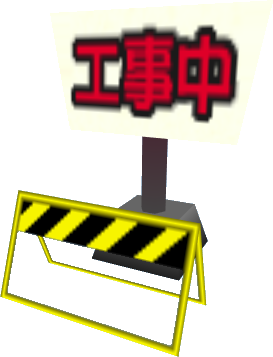 A Japanese "Under Construction" sign that can be found among the graphics for Mini-Game Land.

An early, untextured version of the map used in the Skateboard Scamper Mini-Game. The gaps in the final version are where the moving platforms would be.

An early, untextured version of the map used in the Bob-Omb Barrage Mini-Game. 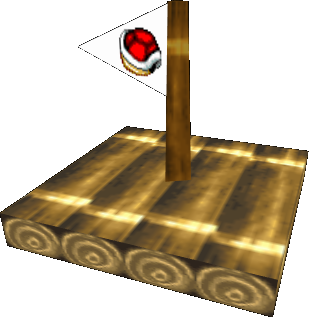 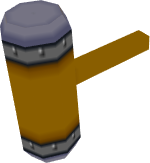 The hammer used in the Coin Block Bash Mini-Game. 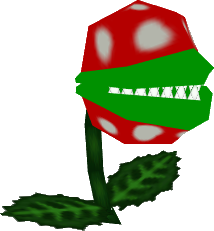 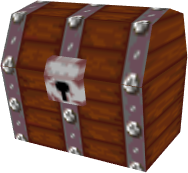 The treasure chest used in many of the Mini-Games. 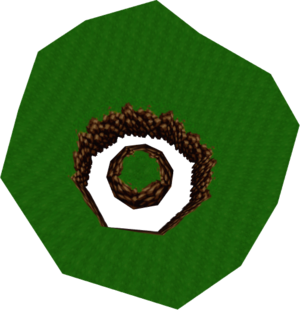 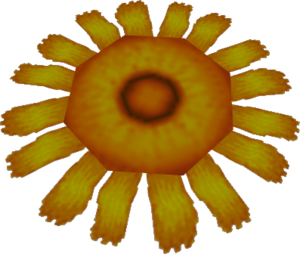 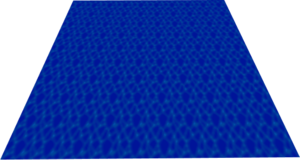 All of the assets from the Coin Shower Flower Mini-Game.

These models were used to represent the other players on the board during your turn.

Present among the graphics for Honeycomb Havoc is the golden banana bunch from DK's Jungle Adventure ending.

This short tune returns, unchanged from Mario Party, as the first track in the game. It can still be heard sometimes on the Debug Menu.

The Japanese version of the game contains explanations for Mini-Games that are not in the final game. Trying to access this data crashes the American version, while the European version replaces every Japanese character with a zero. No preview icons exist and starting any of these games leads to the debug menu.

Though the titles for these Mini-Games exist in the data for the debug menu, they have been removed from it.

Known as "ワクワク あみだドカン" in-game and "110:WAKUWAKU AMIDA DOKAN" on the debug menu. This is a Battle Mini-Game that bears a resemblance to Pipe Maze from the first game. Results would be determined by which player got the best or worst trophies.

Using GameShark code 800F71A9 000A will change the next played Mini-Game to this one.

Seen as "ふれふれ ラッキーコイン" in-game and "127:FUREFURE LUCKY COIN" on the debug menu. This is a 1v3 Lucky Mini-Game where the three players would have caught coins while riding on gems. It sounds similar to Coin Shower Flower.

Using GameShark code 800F71A9 0019 will change the next played Mini-Game to this one.

Known as "つなひき デンジャラス" in-game and "131:TSUNAHIKI DANGEROUS" on the debug menu. The game is a 2v2 altered version of Tug o' War from the first game, but is also similar to Looney Lumberjacks in the final.

Using GameShark code 800F71A9 001D will change the next played Mini-Game to this one.

Known as "ハラハラ いかだくだり" in-game and "137:HARAHARA IKADA KUDARI" on the debug menu. This would have been a 4-player game similar to Paddle Battle from the first game. The controls were changed to be less blister-inducing.

Using GameShark code 800F71A9 0022 will change the next played Mini-Game to this one.

Known as "ステップ おんぷ" in-game and "153:STEP ONPU" on the debug menu. This 4-player game appears to be a more fleshed-out version of Musical Mushrooms from the first game, allowing for comebacks by interfering with the block the note is on. The changes also make it similar to Dizzy Dancing in the final.

Interestingly, this Mini-Game still has an English description available in non-Japanese versions, but it cannot be accessed. These messages can be found at 0x1158997 of the USA ROM.

Using GameShark code 800F71A9 002F will change the next played Mini-Game to this one.

Known as "おたから ダイビング" in-game and "163:OTAKARA DIVING" on the debug menu. This 4-player Lucky Mini-Game would've returned from the original game. The rules and controls were translated for English versions, but the advice page was not.

Using GameShark code 800F71A9 0038 will change the next played Mini-Game to this one.

Graphics and text pertaining to an unused item called "Picker" still remain in the game. It would've allowed the player to choose the next Mini-Game when they used it on their turn. Variations of this image also exist for some Item Mini-Games. 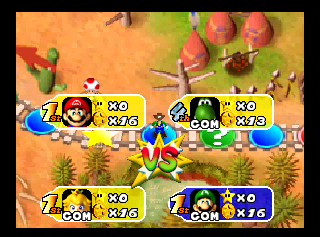 The yellow Player Panel returns from Mario Party, though the "No Game" icon does not. When all players have a yellow panel and the turn ends, the game moves forward to the next turn with no Mini-Game. However, unlike the original, on the last turn the game continues instead of ending (the turn will move from 20/20 to 21/20).

The following code will force each player's state to this unused one: 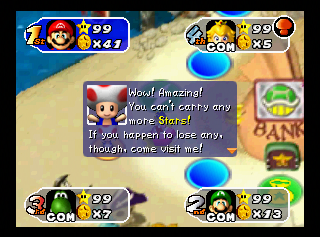 If you somehow manage to get 99 Stars in one game (whether by purchasing or stealing them), when you meet Toad, he'll tell you that you can not have any more Stars. Although the message isn't unused, it's almost impossible to see it without cheats.

If you pass Boo with 99 Stars, the option to steal a Star will always be greyed out. Computer-controlled players will still attempt to select it, however, which will result in a softlock.

While used in the game, the situations to activate it are rare and unlikely to occur. If you steal a Bowser Bomb with a Plunder Chest, this text shows up if you try to use the Bowser Bomb immediately after.

is written to the beginning of the game's save data. If it is modified, the game will display the corrupt save data message on boot.

The game's logo was redesigned in the international versions and both copyrights were merged into a single line.

The guns in the Western Land ending cutscene are revolvers in the Japanese release of the game. They were changed to yellow cork shooters in the international releases. The shooting scene background and the gunshot sound are different.

The professor is constantly smoking a pipe in the Japanese version, which was removed from all localisations.

Mini-Game Land had to come overseas before it could earn its hyphen. The graphics for the Japanese sign still exist in the American version.

Record distances in certain Mini-Games, such as Mecha-Marathon, are measured in meters in the Japanese and European versions and yards in the American version.

In the European version, the lowercase "b", "h", "k", "r", and "y" of the game's font are wider. This change would be retained in both the American and European versions of Mario Party 3.