Dr. Mario 64 is the fourth entry in the Dr. Mario spinoff series. It was later ported to the GameCube as part of the Japan exclusive Nintendo Puzzle Collection. 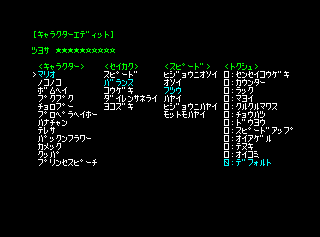 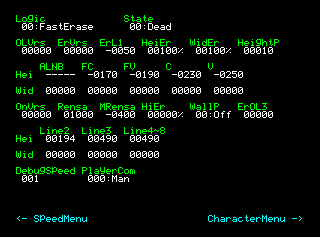 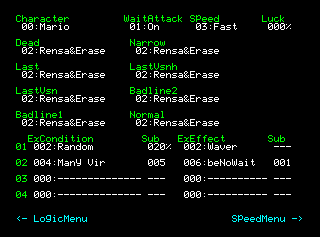 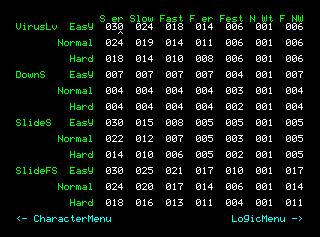 A surprisingly large debug menu remains in this game that allows you to change stats of characters and various AI behavior, among others. Apply the GameShark code below to enable these menus. With the code below on, enter a match and press the desired button labeled below.

With the code on, while in-game, press:

A well kept secret in this game is passwords for the game modes, Classic, Marathon, and Score Attack. A decoder for them is available online. This may have been one of those online scoreboard things like they did with Mario Golf for the GameCube. When in any of the three modes, win or lose a game and when the menu is on-screen, press Z+R+L+D-Pad Left to bring up this screen. 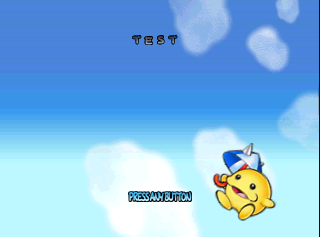 Using the below GameShark code will make the game boot up to the story mode results screen with an unused "TEST" message. 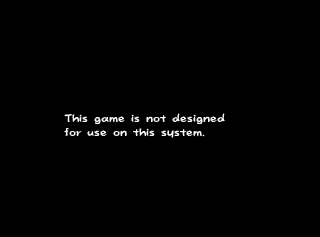 This error screen would show if you tried playing this game on a PAL Nintendo 64.

Present at 0x800AD2E0 in RAM. Interestingly, there are the Japanese names of characters and enemies that never appeared in the game such as Peach, Bowser, Magikoopa, Piranha Plant, Boo, Wiggler, Shy Guy, Cheep Cheep, Bob-omb, and Koopa Troopa. It's likely that the game was originally going to feature characters from the Mario franchise instead of Wario Land 3.

The N64 version was not released in Japan, and doesn't support Japanese name entry. Despite this, Japanese characters remain in the font and are functional if a player's name is hacked to use them.

For the North American version, the character Octo was recolored from his normal black to a bright orange, likely for racial sensitivity reasons. This is inconsistent with his appearance in Wario Land 3, which uses the black color scheme in all versions. When Dr. Mario 64 was later released as part of Nintendo Puzzle Collection, the traditional color was reverted. The unreleased Japanese N64 version shares the same graphics as Puzzle Collection.