Super Mario World: Super Mario Advance 2 is the second installment in the Advance series and a port of Super Mario World. It's a much more straightforward port than the previous entry, although that doesn't mean it's exactly the same; it includes things like a fully playable Luigi in single player mode using his Super Mario Bros. 2 physics and an added status screen you can bring up to see your progress on dragon coins and exits. Also, they fixed Yoshi's arms being orange.

Most of the graphics in this port are marginally-edited copies from the SNES original, and as a result it keeps most of the original's unused tiles.

Some unused Luigi jumping sprites. Since Luigi has a Super Mario Bros. 2-style "flutter" jump in this port, these sprites go unused. However, the big Luigi sprite is briefly used in the 96 Exits cutscene when Luigi is kicking Koopa Masks. Interestingly, these sprites seem to be based on the original Super Mario World (where Luigi was a palette swap of Mario) instead of Luigi's more unique graphics from All-Stars + Super Mario World

An exit sign found in the graphics of the map screen. It has a similar appearance to the sign seen at the end of a Ghost House.

Two blocks of text. The first is just gibberish, while the second translates to "Block Size Transfer".

Several of the unused stages from the SNES original are also unused here, although at least this time they can be accessed through glitches.

NOTE: These glitches are safe to perform as long as you do not save after you perform them.

The glitch requires the ability to warp anywhere using the select menu. When Mario or Luigi is at Star World 3 on the world map, press Right and Select within the same frame. On the level select menu, warp to the second Star Road on the list. When Mario or Luigi stops moving, select the level and the unused level intro and TEST will be loaded. This is just one of many ways to access the TEST level. 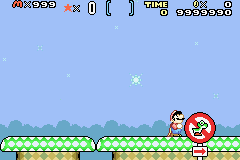 One of three unused level intros in the SNES version, called Rope 2. It is largely the same as the original, except the No Yoshi sign is much lower. 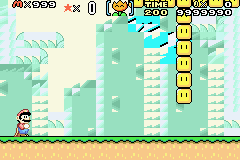 The same placeholder level as in the original game, except the background is glitched. 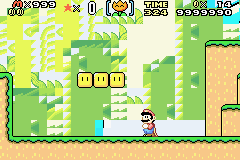 Do the aforementioned glitch at Vanilla Dome 1 while walking down, and select Choco-Ghost House from the menu. Otherwise, it's identical to the original, except the level name is gone. The secret exit will take you back to Donut Plains 1 with the game reverted to Summer (but no way to revert it to Autumn and no way to warp), while the normal exit will cause the game to produce invalid "path tiles" on the map for about three hours (yes, it was timed), but entering a level or pressing Select will cure the horribly glitched graphics.

Do the aforementioned glitch at Donut Plains 2 while walking left, and select Yoshi's House from the menu. This is the intro scene with Mario, Luigi, and Peach that is unique to this port, although said intro stops before the green pipe is seen in the map above.

Follow the instructions to play the Intro Stage, but before starting the level press right for Vanilla Secret 1, then down for Vanilla Dome 1, and down again (screen will refresh twice).

Most of the sounds are either from the original game, or voices taken from Super Mario Advance, along with some new ones.

This sample (probably an earlier sample for the Game Select screen when choosing Super Mario World) doesn't seem to be used. In the final game, Mario and Luigi both say "Super Mario" and Mario says "Here we go" rather than "Here I go!" 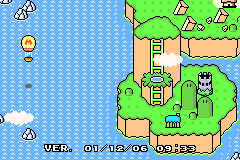 On the depicted intro screen (before the SMA2 title screen), a build date can be revealed by pressing this button sequence: right, Select, left, L, R, Select.

While the displayed time stops at minutes, the seconds also exist in the data:

The Japanese version uses a remake of the original Japanese logo, complete with "Super" above "Mario" like on the Japanese original's box art (albeit without the "Super Mario Bros. 4" portion).

By comparison, the rest of the world (excluding China) got a shrunk-down version of the international logo, which makes sense and maintains consistency with the original releases.

The Japanese title screen itself, on the other hand, uses the international version of the logo for some odd reason. The international release darkened the logo colors somewhat, though this change was reverted for the Chinese release.

All versions feature a different trademark symbol as well, with the Japanese version's being a thicker version of the one used on the original game's Japanese title screen.

The music played in the "96 exits" cutscene changed slightly between versions. The international song includes most of the "stage clear" theme from Super Mario Bros.