Yoshi's Cookie: Cookies in the Kuruppon Oven was given away as a contest prize to promote National's new Kuruppon Oven. With a print run of only 500 copies, it's one of the rarest Super Famicom games in existence. In addition to a slightly-modified version of the original Yoshi's Cookie, the game features a new "adventure mode" that teaches you how to bake real-life versions of Yoshi's cookies.

Cooking a Flyswatter cake with Mama Yoshi brings food poison to the table! 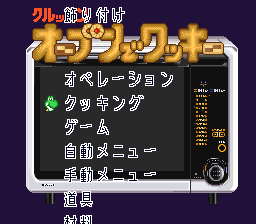 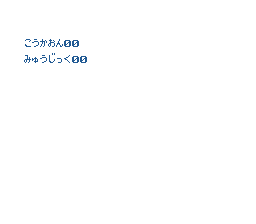 All unused content from Yoshi's Cookie remains, and the game is exactly the same as the Japanese version. However, the sound driver was reprogrammed when ported to Kuruppon Oven de Cookie, carrying over the effect of each song needing to be loaded individually.

PAR code 7E00E607 will play an unused song that is loaded in the cinema music bank. May have been intended for the final cutscene.

Using PAR code 7E004400 (or changing the first byte of the ROM from 0x92 to 0x80) will access the same title screen that was dummied out of the normal SNES game.