Yoshi's Story is the spiritual successor to Super Mario World 2: Yoshi's Island. It's notable for its aesthetics and the fact that it's pretty easy... unless you attempt an all-Melon run.

These test levels can be entered by using the US GameShark code 883DC553 00?? (where "??" is one of the level IDs below) and entering a level in the time trial level screen while holding the GS button.

You can see them in action here. 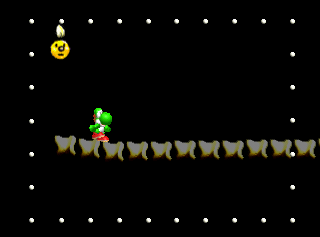 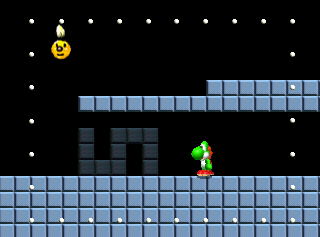 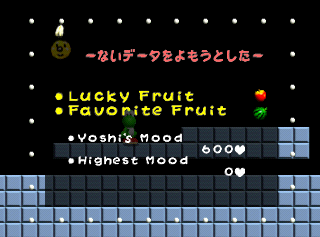 The level's layout merely tests to see how high and/or far Yoshi can jump. Yoshi starts on a bone bridge above the level. Sideways numbers indicate the distance up from the ground, while the straight numbers indicate the distance between the floating platforms above. At the top of the pause screen it will say "ないデータをよもうとした", which translates to "Tried to read nonexistent data".

A test of the Cogwheel platforms.

A test for the Cloudjin boss and see-saw platforms.

This track sounds like the tracks that play when you open one of the pages in Story Mode, but it is never used.

A crash screen identical to the one in The Legend of Zelda: Ocarina of Time is present in this game. To access it, enter GameShark code 81043880 FFFF 81043882 FFFF.

When the game crashes, input the following button code, which is the same code from Ocarina of Time: 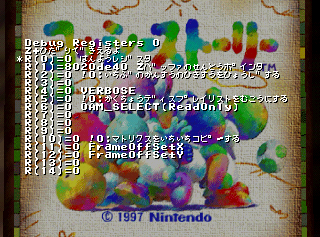 Two fragments of code can be found in the ROM for the Japanese version.

The iQue version changed the Nintendo logo to the iQue logo. Its sound clip still saying "Nintendo!" though.

The Japanese version has the game's title written in pastel rainbow colors, which were dropped in favor of some simple shades in the international versions. This also affects the animation on the title screen. These changes were later adopted for the iQue release.

The copyright date was also updated between versions.

In the Japanese version, you had to complete Story Mode in one sitting. The international versions save your progress in Story Mode after every level successfully completed, so you can continue where you left off.

The Options menu had to be adjusted a bit because the Story Mode progression data can be deleted separately from score data (which is saved even in the Japanese version). 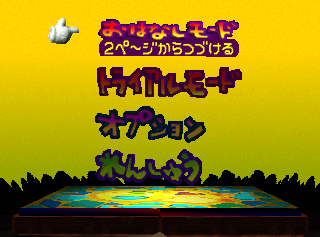 This feature does not revert when the language of a US cartridge is set to Japanese. The font used for the "Start From P.#" banner is unique to the US cartridge and doesn't appear at all in the Japanese version.

Also, when data is erased in the Japanese version, an explosion can be heard. In the US version, it plays a fanfare.

The US title logo remains English in Japanese mode, and the European version does not have a Japanese option. It was replaced by European languages. 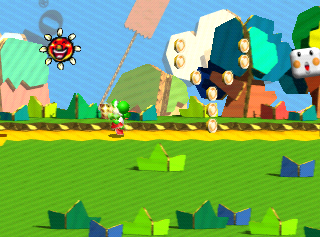 The US version adds secret coin formations that spell letters to every level, triggered when a heart fruit is eaten by Yoshi. These were entirely absent in the Japanese version.

In the Japanese version, the egg blocks are always green. In the US and European versions, they match the color Yoshi you're currently playing.

In the Japanese version, in the first room of Blargg's Boiler a bone bridge near the end has two melons floating in bubbles right next to each other. The international versions moved one of the two melons to a better hiding place.

In the international versions, finishing a level by eating 30 of the same fruit (easiest to do with melons, but possible with any) gives a slightly different finish - the heart graphic is replaced with a drawing of that fruit.

The Japanese version has a glitch that can allow the player to play any level from the first world in the Practice Mode. In international versions, this glitch was fixed.

To do this glitch, at least one level must be unlocked in Trial Mode.

The pause screen behaves like Story Mode; The player cannot escape the level. However, completing the level will bring up the score tally of Practice Mode, and the game will reset to the main menu.

International versions fixed this glitch by resetting the "Yoshi is alive" flags when starting Practice Mode.

The game checks for the correct CIC lockout chip. The game reads a value from $A0000164, then compares it. If the values match, it means the cart is likely genuine. If the values do not match, fruits and other objects will be missing and the game will not proceed.