A few other builds with minor differences were also present in the leak. Most of these require changes to the internal ROM header in order to be emulated correctly. To fix a header, set the byte at 0x7FBD to 05, and set the bytes starting at 0x7FD5 to 20 15 0B 00 00. Build dates can sometimes be found at 0x7FA0 in the HH-MM-DD-hh-mm format.

Dated December 19, 1994. Mostly the same as ys_rom_0_D.bin but with a few minor code differences, including a slight change to how the aiming cursor moves when you first begin to throw an egg: Specifically, when charging up a throw, the cursor stays fixed in place instead of starting at a low angle and moving upward.

Dated June 26, 1995. A near-final build with a few minor unknown code differences. In addition, the final game's debug features are enabled by default.

This build has no internal ROM header at all and requires a fix.

Identical to the final build, but with some additional debugging features accessible through Controller 2 during gameplay:

The first time you start a level, all graphic layers are disabled by default for some reason, so you'll need to use this feature to actually make the game playable.

Same as ys_rom_16_0.bin, except with the final game's debug features also enabled. Requires a header fix.

Combining the 4 512kb bin files and patching the header yields working ROMs. This applies to both the ones found in Ver0\sfc, as well as Ver2\sfc. Differences are present when compared to other ROMs in hex editors. The ROM from Ver0 is also dated June 26, 1995, strangely, whereas the one from Ver2 has a date of Oct 2, 1995.

Included in the leak are ROMs that appear to contain editors allowing for map and level creation and play testing. In order to run these, an emulator with SFX-DOS support is required, such as this branch of bsnes-plus. The mouse should be configured to be in controller Slot 2. Most of these tools require a header fix, as described above. Set the byte at 0x7FBD to 07 (1Mbit of Expansion RAM) instead of 05 to fix graphical corruptions.

Upon booting this level editor, there are two choices: ENMY DATA SET and BG EDIT. No header fix is required. The first allows for placement of enemies on the map, and the second choice allows for editing of map tiles.

Dated December 23, 1994. Seems to be pretty close to ystool.hex in functionality.

Mostly the same as yst_rom.bin and ystool.hex, but with a few minor differences. Setting the byte at 0x7FBD to 03 causes a 3rd option, "UNDO BACK-UP", to appear. 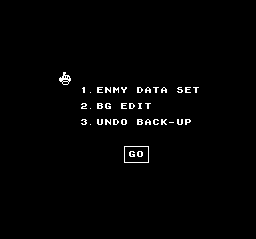 This ROM appears to be an editor for the main overworld Mode 7 map. This tool allows you to place objects on and around the island, save/load maps, as well as manually walking Yoshi around the island.

This gif shows all available objects placed onto the map. Most of the Yoshi animation frames were omitted in this gif:

Combining the 4 ysm_rom*.bin files (0-3) produces a bootable ROM. Mostly the same as ysm_rom_0.bin, but upon booting, it displays a man in a brown suit, as opposed to baby Mario. There are less objects available to place than in ysm_rom_0.bin, starting at "UNIT NO." 6B. A comparison is depicted below.