Mario Party 5 replaces the item system from the previous games with Capsules, which can be either used by the holder or placed on the board. This system sticks around until Mario Party 8, when it's replaced with pieces of "candy" which function like the old items. Oh, and Donkey Kong has been demoted to a special space.

Other than that, it's Mario Party. You should know how this works.

This graphic is loaded when starting the Card Party found in Bonus Mode. 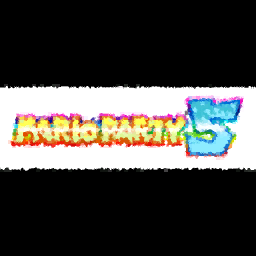 In instpic.bin is an early version of the game's logo. 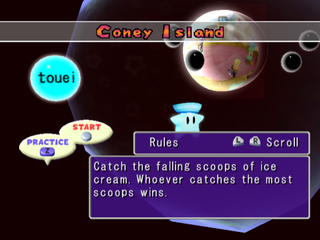 Just off to the lefthand side of the Mini-Game explanation screen, there is a bubble featuring the word 倒影 (translating to "reflection") floating outside the sky dome.

Two textures that translate to front and back.

sample.bin has two early capsule models of a coin block and Boo, and the Toad host leftover from Mario Party 4.

In this minigame, the player must use the A button to jump 10 times within 10 seconds to win. If the player does not succeed, the game will end in a draw.

Due to an audio glitch, when the minigame victory music plays, the mini-game music Everybody Party! also plays simultaneously. Similarly, if the minigame ends in a draw, the music Inside the Dream plays, while the draw theme does not play at all. This bug is not present in Mario Party 6's sequencedll minigame.

Menus / modes that were used for the E3 demo.

Replace mdparty.bin (data Folder) and mdpartyDll.rel (dll folder) with e3boot.bin and e3bootdll.rel. Select Party Mode from the main menu and the E3 title sequence will pop up. 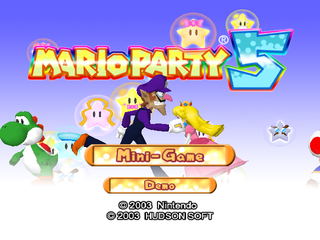 In this title, many Star Spirits fly up from the bottom of the screen, and the playable characters walk around the screen in a circle, like the silhouetted version on the final's file select. It also features an early logo for the game.

Selecting "Mini-Game" will crash the system (it should bring up the menu below), while selecting "Demo" will fade to a black screen, then back to the title.

The below set of Gecko codes will also make this screen accessible in the EU version by selecting Undersea Dream in party mode:

Replace mdparty.bin (data Folder) and mdpartyDll.rel (dll folder) with e3setup.bin, e3setupDLL.rel, or use one of the below Action Replay codes. Select Party Mode from the main menu and this menu will appear instead. 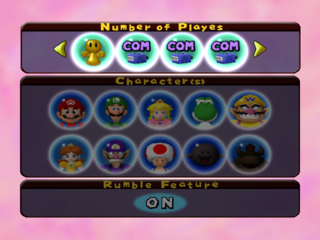 Interestingly, Boo and Koopa Kid can't be selected on this menu, presumably because their characters weren't done in time for E3. 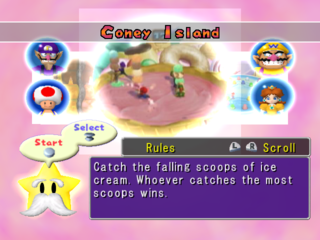 Unlike the Mario Party 4 E3 menu, Party Mode boards cannot be selected. Once everything has been set, the game jumps straight to a mini-game menu.

The mini-games boot up without explanation screens. Once a game is finished, the player is booted back to the menu.

The following mini-games are available:

Replace w01.bin (data Folder) and w01Dll.rel(dll folder) with selmenu.bin and selmenuDll.rel, or use one of the below Action Replay codes. Start a new Party Mode game and select Toy Dream as the board. Once the game starts, you should boot into a debug menu! 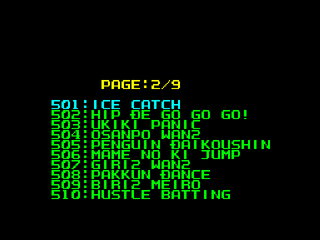 This is the same debug menu from Mario Party 4. The mini-game titles are changed.

Before a mini-game is played, the same rudimentary character select screen from Mario Party 4 appears.

There are two special options in this menu: "START" and "MESS CHECK".
"START" will take the player back to the File Selection screen.
"MESS CHECK" leads to a message test. 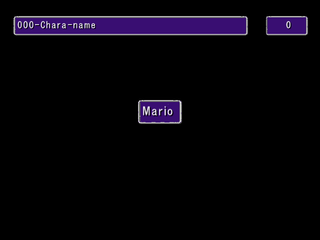 All of these capsules are named "Error", have no use description, and use the Miracle Capsule model.

Using this capsule will activate a camera debug function. 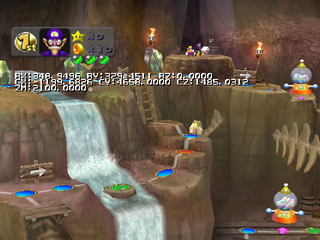 Using this capsule will activate a warp debug function. 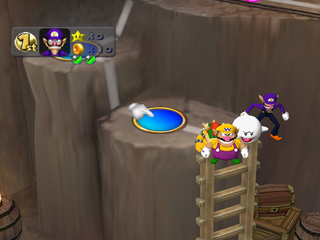 While this can be used and fits with the rest of the debug capsules, it doesn't appear to do anything. 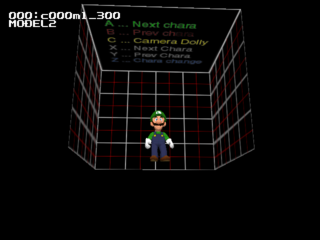 Enter one of the below Action Replay codes, then choose Pirate Dream as the board. The controls at the top of the cube are actually incorrect.

These capsules cannot be used by the player—their intended use is for the game to manipulate the board's spaces.

Since the Bowser Capsule is automatically used when obtained, this description is never seen. 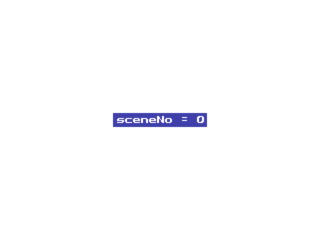 There is unused code in the game that allows you to select which story mode intro scene you want to view. Pressing A starts the board. D-Pad Left and Right move the scene no. selection left and right respectively. To access it, use one of the below Gecko codes and select Story Mode. 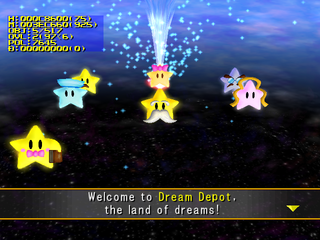 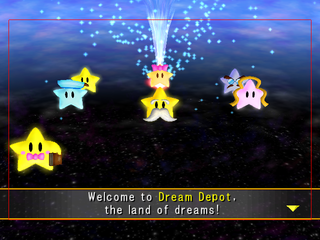 Enter one of the below Gecko codes and you will see the screen surrounded by red borders which specify the region of the screen that is safe for UI elements to use. The borders specify that within 16 pixels from the horizontal edges and within 40 pixels of the vertical edges are not safe to use.

This sound sample fills all unused music slots. It is a unique behaviour compared to playing an out of bounds sound which is absolutely nothing. 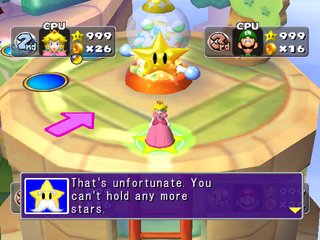 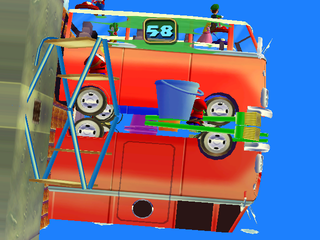