From The Cutting Room Floor
Jump to navigation Jump to search
This page contains changes which are not marked for translation.
Other languages:
Deutsch • ‎English • ‎français • ‎polski • ‎português do Brasil • ‎Ελληνικά • ‎日本語 • ‎한국어 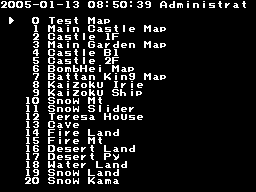 The game contains a map select screen that can be reenabled using the Action Replay codes below. It appears upon loading a save file and allows access to every map in the game, including test levels. The ROM's build date is displayed at the top of the screen.

More so, selecting a map that lacks a star select screen from the map select menu instead brings a plain screen with a wooden Bowser emblem. In addition, a Bowser jingle (with laugh included) will play instead of the standard level jingle when loading the Bowser boss maps.

Within the ROM there is a text file called BUILDTIME that contains the following build dates: 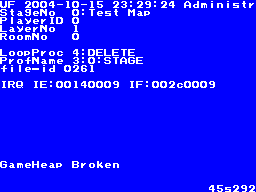 This game has a crash debugger triggered similarly to the one in Ocarina of Time. This one is a bit less technical and more informative, but a lot less in-depth.

To access the crash dump screen, crash the game (such as ejecting the game card). After doing so:

This screen also exists in Animal Crossing: Wild World and New Super Mario Bros. It was used by the developers to debug crashes and other errors in the game since it helps pinpoint exactly where an issue occurred in the code.

Here's an explanation of some of the info on it:

There are two test levels in the game. Either input the Action Replay codes listed on the Notes page, then hold Select when loading a used save file, or use the map select. The levels don't have proper star select screens, so they just display text from other parts of the game. The names for the unused maps come from the crash debugger/map select and model/directory names, respectively.

This is where the real meat is. Lots of stuff used for terrain and object testing, as well as general level testing stuff.

The checkerboard textures from Super Mario Sunshine's debug room make their third appearance here. They must really get around.

There are some tiles in the top-right corner of the map with Japanese characters. Each one exhibits the corresponding ground type's behavior when stepped upon:

This level mostly consists of a flat checkerboard plain with a bunch of Tox Boxes trundling around. This map was used for testing them as the name "Onimasu" (オニマス) is the Japanese name for Tox Box.

There is also an icon for the spiked balls from the Bowser battle in the top left corner of the map. 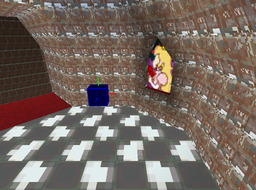 In the original game, the room containing The Princess' Secret Slide is a small hexagonal room with a sign and three stained-glass windows of Peach. The DS remake replaced this with a much larger room in a separate map with the sign, two stained-glass windows - with the one on the right warping to the slide, doors that allow you to swap characters, and a door going to Peach's Rec Room.

Despite this, the original room is still a part of the castle model, complete with the sign and Secret Slide warp, though most of the textures are incorrect and it doesn't have any collision. The sign has the same settings as the final room.

By removing the warp behind the door in the foyer that goes to the map containing the new room, setting the door so it goes to area 6 (the area the original room is in), and adding collision data, the player can enter it. 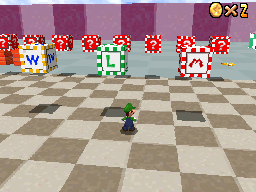 The game contains three M/L/W blocks that give the corresponding character's cap when hit. These objects work perfectly but are unused in the final game. However, they can be found in the Test Map. They won't release anything unless the character is already unlocked, or the cap object exists in the level via object 254.

Using the following Action Replay code for the appropriate version will cause these blocks to spawn. The USA code replaces trees with them while the European code spawns them near the player. 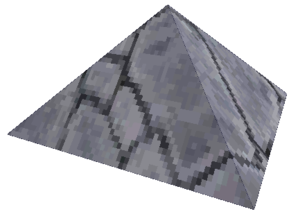 A rock triangle only solid on top. Yay.

The multiplayer Peach's Castle features direct reproductions of the stair and barrier objects as part of the level model, so the separate objects are unused. 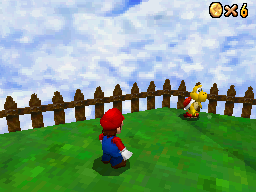 This Koopa shows different behavior than the standard green version. It runs into the player rather than fleeing from them, though it doesn't hurt the player. When knocked out of its shell, it will chase after it. When defeated while shell-less, it gives a blue coin, just like green Koopas.

The shell obtained from knocking a Red Koopa cannot be ridden or picked up. The player can kick it to launch it in one direction; it then continues following a straight line, knocking out enemies in its path, until it crashes into a wall and disappears in a puff of smoke. If Yoshi eats a red shell, he can spit fire, as he could in Super Mario World.

Red Koopa Troopas can be added to a level by changing a Koopa's Parameter1 to 0x0001. They can also be seen with the following Action Replay codes.

Most levels have four entrances grouped around their starting point, out of which only one entrance is used for single-player levels, leaving the other three unused. The exceptions are the character painting levels and the Play Room, which suggests that they were created late in development.

The presence of the unused entrances indicates that the full 4-player mode was scrapped after most of the levels were already made, which is actually not that early in the game's development cycle. Since Super Mario 64 DS was one of the console's launch titles, it is quite probable that the cooperative mode was scrapped due to lack of time to finish it. Or simply due to technical constraints; note that Super Mario 64 DS is one of the rare games that includes Download Play but not multi-card play.

In the final game, it was replaced by a competitive game limited to scaled-down versions of four small courses.

It's worth noting that a full-game multiplayer mode was, according to some interviews, planned for the original Nintendo 64 game (and its canceled 64DD expansion), using the split-screen variation. It appears that they originally intended to revive the concept in this remake.

An unused low-polygon model for a Goomba. The game originally switched out the normal model with this one at a certain distance from the camera, but the low draw distance for objects eventually rendered this useless. This functionality was still intact in the E3 demo, which can be observed at this timestamp, before the Goombas activate. Although coins still do use a low-model when viewed from a distance, this may be because there are often many on-screen at once. 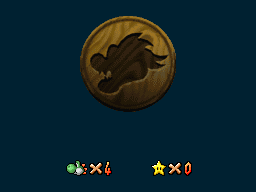 An unused, rather simple Bowser-themed variant for the star select screen. Used in the unused map select.

Its filename (for_vs_cross.bmd) implies that it was made for the Battle Fort level. It goes unused since the only entrances to the Battle Fort are a hole in the Courtyard and through VS Mode (which uses a generic sky painting). The painting object can be set to display this graphic.

It appears to depict an early design of the course, most notably the sides are multicolored and there are no squares on each edge.

Star graphics for a door that would require five Stars to unlock... except the door object has no such variation. Interestingly, source code for the IQue version of the original game mentions a 5 Star door existing, making this a possible remnant.

The sprite set from the minigame Coincentration contains some Mario and Luigi sprites from Super Mario Advance 4 which obviously aren't used in the final game. There's also an unused "defeated" Wario frame, which presumably would have been used before he falls on his back. 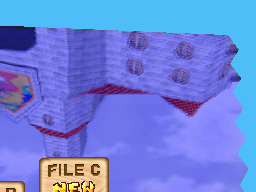 The left and right edges of the shape used for the shimmering water of the file select screen are spiky, but the edges are always offscreen so they can't be seen. 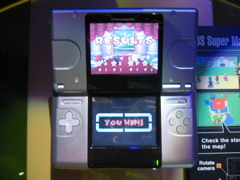 The model data for the room where the Yoshis jump into a painting in Vs. mode is named e3_start_map_r00.bmd. E3 likely refers to the event of the same name; presumably, the room was originally created for the demo version shown at E3, and then kept around and reused in the final version.

The only Star door in the DS game which does not also exist in the original N64 version is the 8-Star one that leads to the Mario painting. Its graphics file is obj_door0_star10, indicating that this door went through some adjustments during development.

The Japanese logo features metal around the text and a more emphasized "DS" with a black outline around the letters. The Korean logo has slightly darker colors. The logo used in international versions is closer to the original design of the Super Mario 64 logo, with wood around the letters and gold around the "64". The "DS" is also less emphasized. Strangely, the word "Super" is all cyan rather than multicolored. The background gradient was also changed to match this cyan, whereas the Japanese version uses a deeper blue that matches the bottom screen colors. The Chinese version breaks tradition by rendering the majority of the title in Chinese, rather than using a subtitle. The Korean version lacks a Rec Room, as seen in the image above. Strangely enough, while the Korean logo is based on the Japanese logo, the background on the bottom screen is the same as the international version.

The following bugs/mistakes were fixed in this version:

The Korean version fixes the game freeze part of the Silver Star glitch, but the rest of the glitch still occurs.