Nintendo World Championships 1990 is a rare game used in the competition of the same name, in which players had six minutes to collect 50 coins in Super Mario Bros. and then finish Course 1 of Rad Racer, with any remaining time spent in the A-Type mode of Tetris. After time expired, the player's scores in each game were tallied, with a 10× multiplier for Rad Racer and a 25× multiplier for Tetris.

It is said to be the Holy Grail of NES collecting, as just 116 cartridges (90 gray, 26 gold) were produced.

A jovial song likely intended for the title screen, which has no music. Nintendo Campus Challenge 1991 uses it for the name entry menu. 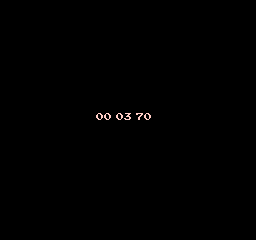 At the title screen, holding A and pressing Select on Controller 2 accesses a timer test.

Holding B instead will skip Super Mario Bros. (resulting in a score of 0 for it on the final tally) and start you on Rad Racer.