Nintendo's two-screen rendition of Tetris, themed after classic NES games. It introduces plenty of new modes, too, like Catch and Puzzle. 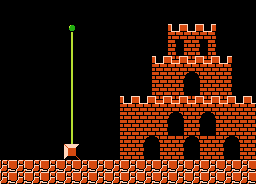 A Super Mario Bros. flagpole and end-of-world castle against a black background. In Classic mode, Mario at the top of the screen never makes it to the end of a level, making this go unused.

On the bottom screen of Puzzle mode (themed after Yoshi's Cookie), Yoshi is seen looking to the left. However, it turns out that the image itself has Yoshi looking to the right. The game puts a separate graphic over his eyes to make him look the other direction.

Every level in Classic Mode has unused sprites from the original NES games themselves.

Alongside the menu options for all of the other main modes, there is an extra one which goes unused. The mode seems like it would have been themed around Ice Climber, and the name seems to translate to "Niagara," as in the falls. In the English version of the game, the text remains untranslated.