Puyo Puyo Tetris is a crossover of the Puyo Puyo and Tetris series. Due to licensing issues with The Tetris Company, this version of the game wasn't released internationally, although considering it was on the Vita, it's probably no huge loss. Fortunately, Sega was able to work out the copyright problems by the time of the Nintendo Switch, PC, and PS4 releases. (Strangely, the Xbox One version remained exclusive to Japan.)

The archive title_trial.narc inside data\title_trial contains files used for the title screen in a trial version of the game. The archive's title.txlst holds the trial logo and menu graphics, which are identical to the final version, aside from the word "たいけんばん", or "trial version", being added. 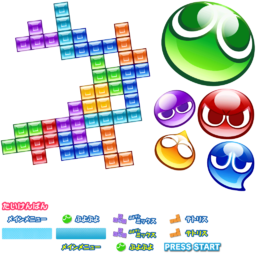 Additionally, the archive trial.narc in the directory data\trial contains leftover graphics from the 3DS trial version of Puyo Puyo!! 20th Anniversary, namely control explanations and a trial ending screen in the files try_manual_b_d565.dat, try_manual_t_d565.dat and try_bg_top_d565.dat. 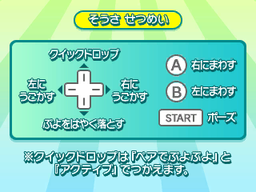 An seemingly unfinished version of a trial version's "Thank You For Playing" screen can be found inside the aforementioned trial.narc archive, inside the file try_bg_bottom_d565.dat; the kanji "仮", or "temporary", has been superimposed onto the image.

An archive called test_mode.narc can be found inside the folder data\test_mode, containing the file test_bg.dat. The file holds five screenshots of an earlier build of the game, four of which are identical. They show matches in two and four player mode and have various graphical differences to the final game, such as the characters still using artwork from Puyo Puyo!! 20th Anniversary and the Tetriminos having slightly different shading.

The file Texlist_0001.gxt in data\surf_board_test\viewer holds the graphics for an unknown test mode.

The NARC archives in the game's Vita version are of the same format as NARC files used in various games on ex. the Nintendo DS, a proprietary format by Nintendo. In addition, NARC archives in Puyo Puyo Tetris are accompanied by .naix files, which are very similar to C++ header files, and even proclaim to have been created by "NINTENDO TWL-System Archiver".