Puyo Puyo Chronicle is a game for the Nintendo 3DS as part of a celebration of Puyo Puyo's 25th Anniversary. Barring spinoffs, this is the first Puyo game to be presented with 3D characters as opposed to 2D portraits.

Arle, Ringo and Ally all have early versions of their art that are never seen in-game. While it appears that Arle and Ringo's were only for testing purposes, it seems Ally's would have been her final art at some stage in development.

Leftover Images From Other Games

The background and the buttons are from Puyo Puyo!! 20th Anniversary. Oddly, the menu background is in grayscale.

The character field uses Ringo's art from Puyo Puyo!! 20th Anniversary. This can also be found in early screenshots of Puyo Puyo Tetris, as well as in the game's files. 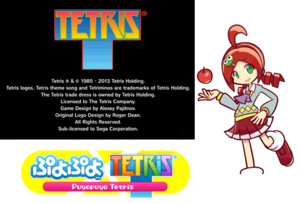 These leftovers are all from Puyo Puyo Tetris and are found in the "rpg/staffroll/surfboard" folder in the files, which is where the movie for the end credits is stored.

This is from Puyo Puyo 39, which is a minigame in Hatsune Miku: Project Mirai DX. This appears to be Len's art for his Servant of Evil costume.

Appears to have been used for testing music loops.

Rafisol has a model and three animations for the overworld, yet she's never seen anywhere after the completion of the game. She lacks an entry in name_listJapanese.mtx.

Carbuncle is just like Rafisol, having a model for the Overworld and all the animations needed to function properly. However, he never shows up in the overworld, and lacks an entry in name_listJapanese.mtx.

Rafisol once again has an unused animation, this time in Manzai, which is labelled as "joy". It is not used in any Manzai Rafisol is present in, so you can only view it by editing the game's script to load Rafisol in place of another character, editing the MzChangeAnime value corresponding to Rafisol to load the happy animation rather than something else, or by loading her model and animations in a model viewer.

In chapter00Japanese.mtx is this block of text, referencing the possible animations and faces a character has for various emotions. This is used for the 30 test manzais that were used to test character animations.

The video shows one of the manzais loaded into the game, replacing the very first manzai. As there's no known way to access these manzais without replacement, the voices from the first manzai and another play during it. The cutscene had to be modified in order to properly load--Every test manzai loads two of the same character, one on the left and one on the right. This, however, crashes the game in its current state. As such, one of the Rafisols that was supposed to be loaded has been replaced with Ally to allow the cutscene to play out.

In dungeon_01Japanese.mtx, these unused lines of text are in the very first manzai of the game with Satan and Arle, sandwiched between lines that are used.

In skill_nameJapanese.mtx are all the skill names and descriptions. There's quite a few placeholders.

At the very end of the same entry with the multiple 欠番s is one placeholder entry for the active skill short descriptions.

The entries list for the short passive skill descriptions has one placeholder entry.

欠番 makes a return 46 times in the long descriptions for active skills seen in the status menu. 23 are between "味方全員のかいふく50％アップ" and "そうさ中のぷよの色をへんかさせる", while the other 23 are between "よこくおじゃまぷよを24コへらす" and "相手の青ぼうぎょ15％ダウン".

Within skillmovie_Japanese.mtx are the text used in the skill movies which introduce character skills. Rafisol and Carbuncle have placeholders.

The above are for the full descriptors of their skills.

The above are for the characters saying they'll be introducing their skills.