Unlike the MSX2 and Famicom Disk System games of the same name, the arcade Puyo Puyo focuses exclusively on competitive play, which would prove to be the franchise's ticket to success.

The English version, labeled "World" in MAME, is one of the greatest Puyo Puyo-related mysteries. Almost all information regarding its release has been lost to time. Its inclusion in the Sega Ages series for the Nintendo Switch confirms that it is an official translation and not a bootleg as was claimed for a long time, but when it was released and in what markets is completely unknown. Regardless, the English version features some aesthetic changes.

The Japanese versions display a copyright notice on boot. World doesn't have an equivalent notice, and instead goes straight to the title screen. 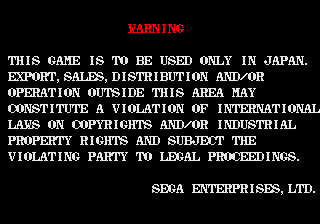 World's title logo is slightly different in style. However, it goes through the same stretching animations as the Japanese version.

The voice work was redone in English for the World version, with Carbuncle's catchphrase being the only voice sample that survives the transition. The World version has fewer samples overall; two samples used in the final sequence are completely removed, while other samples are used multiple times. (For example, the "Puyo Puyo!" from the title screen is also used for a 5+ player chain.)

A vast majority of the characters' names are changed. The four-letter abbreviation above each character's preview window is changed accordingly, with the exception of Arle, whose abbreviation becomes "YOU."

Most of the name changes are exclusive to this version; only Dark Prince would be used in later games.

World removes Harpy's wings and flying animation, and also changes her dress's color from white to a shade of green. This is reflected in both her cutscene sprites and her battle portrait.

Satan has a sprite (his reaction to Arle incorrectly calling out his name) that goes completely unused in World.

The Japanese versions contain an alternate, unused version of Arle's "Diacute" spell where she stutters the first syllable. This is a reference to the Madou Monogatari games, where the damage-doubling Diacute causes Arle to stutter the name of her next spell; in this case, it behaves as if she casted Diacute twice.

The following MAME cheat (verified for Rev. B, untested for Rev. A) forces the game to play the double Diacute for any and all voice sample calls. Place it in puyoj.xml.

The MSX2 and Famicom Disk System Puyo Puyo contains six Puyo colors, and if this prototype footage is any indication, the Mega Drive version almost did as well. (P1's top Puyo at 5:45 never appears in the final game or any Puyo game.) As it turns out, the sixth Puyo does indeed exist in the arcade version, can be placed on the field with easy modifications to Mamecheat.co.uk's Puyo Puyo cheat files, and (aside from being visually broken) is fully functional.

Mamecheat intentionally skipped over the sixth Puyo for each of their Puyo-setting cheats. For example:

Adding the sixth Puyo as an option is a simple matter of filling in the unused slot.

There are unrelated parts of the game that are affected by these cheats, so it is recommended to only activate them during battle.

Rev. A of the Japanese version includes a bug where the AI loses its ability to manually drop Puyo if its joystick is held to the left or right. (P2 joystick if the player is on the P1 side and vice versa.) The effect is most easily seen with Suketoudara, who starts a match by manually dropping four full rows of Puyo, and Harpy, who starts a match by quickly lining her left and right columns. Players cannot move their Puyo laterally and simultaneously manual drop; it is likely that the developers forgot to completely disable the left/right input check for AI opponents.

Rev. B fixes this bug. However, neither World, nor the nearly 1:1 Mega Drive port, nor even Dr. Robotnik's Mean Bean Machine inherited said fix.