Take the popular Japanese game Super Puyo Puyo and put Kirby into it. Presto! It's also one of the very few games where Kirby talks, and that's... probably for the better, given his attitude.

Normally, if you hold down A+B+X+Y on Controller 2 on power-up or reset, you will get the expanded "Custom" and the additional "Special Custom" menu, but only with the first four options. 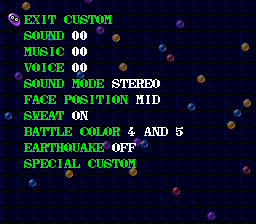 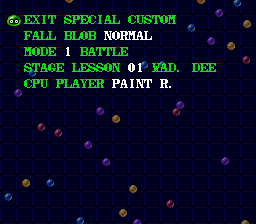 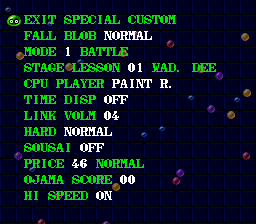 Use the code 80FFF002 to expand the additional "Special Custom" menu to include even more options, and also make it instantly accessible without requiring the button code. Many of these options are identical to their counterparts in Super Puyo Puyo.

The code 80FFF101 lets you temporarily freeze the game by pressing Select on either controller.

The European and Australian version was released as Kirby's Ghost Trap, with the localization recontextualizing the Garbage Puyos (called boulders in Avalanche) as ghosts due to their transparent appearance. (The regular Puyos are called Blobs regardless of which version.)

The controller buttons were recolored to match the European controller, and the "SUPER NINTENDO ENTERTAINMENT SYSTEM" text was removed.

All exclusive Kirby's Avalanche voice samples were replaced with Kirby's Ghost Trap ones. Both voice actors are the same people who did the voice samples used in the SNES version of Wario's Woods. Voice numbers 0E, 21 and 23. 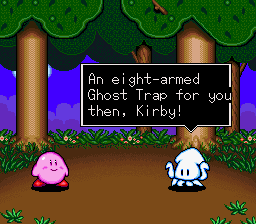 The change from "Avalanche" to "Ghost Trap" caused a minor text overflow in Squishy's stage, as the dialogue box was not widened and/or the text not rearranged to accommodate the longer name.