Despite the name, Kirby Battle Royale is not a Battle Royale Game, rather it's a weird mini-game collection with a few notable achievements; It's the first Kirby game to have online play, 3D Copy Abilities, and both top-down 3D and side view 2D modes. From plain brawling to throwing a ball to a flag, there are lots of mini-games to play. The costumes alone will make a hardcore Kirby fan cry with joy! All of the Copy Abilities are tied to different games from different years, too. It also has an Arena mode as one of the minigames, so maybe the title isn't far off after all.

The Training Dummy and Axe Knight have 5 duplicates of the same face icon in their icon file. Every other playable character has 5 other icons for their alternate colors, but since Axe Knight and the Dummy aren't playable, the rest of the icons are the same as their default one and go unused. Aditionally, the Soldier Waddle Dees have unused colored character icons, since they actually have alternate colors, but only use the Green, Blue and Orange versions, meaning the Pink, Yellow and Gray versions are nowhere to be seen.

Found in many model files inside of the folders of RomFS/gfx/Project is an 8×8 black square called "Dummy_", possibly used for testing. Putting it here would be unneeded, since... Well, it's just a black square.

"Test" is an unused animation found in King Dedede's story model. The animation itself only has Dedede about to close his eyes without moving at all for 110 frames. 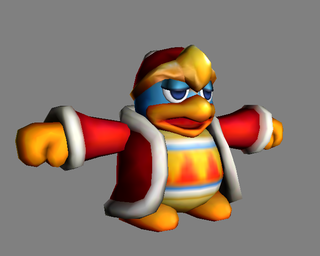 The base game with no changes/updates.

Released on December 13, 2017 in Japan, Europe and Australia. It includes the following changes:

Released on December 27, 2017 in Japan, Europe and Australia, and January 19, 2018 in North America. It includes the following changes:

Released on February 1, 2018. It includes the following changes: