From The Cutting Room Floor
Jump to navigation Jump to search
This page contains changes which are not marked for translation.
Other languages:
English • ‎español

Eating enemies, floating around, fighting disembodied eyeballs... a Kirby game, except this one is in 3D and you can combine powers.

Present at 0x9D8CC0 in the US version is some very, very early art.

Among the graphics of the different HUD displays is this strange HUD of some sort that might be related to debugging.

Hidden outside the skybox in Adeleine's introduction cutscenes are several bushes, one of which uses a different texture from the others. The normal bushes are given color through the use of shaders, but the unique bush has a colored texture. This is likely what all of the bushes in Pop Star stage 2 looked like earlier in development.

Two of the textures in King Dedede's castle have transparency data that is not used by the game. The square wave pattern texture, used on multiple walls in the castle, could have doubled as battlements by hiding the top half of the pattern. The stained glass window texture has transparency for all of the black parts, which would allow it to be used as a light effect or allow more detailed wall textures to show through from behind. Early footage of the game shows the textures being used without transparency, suggesting that the change was made early on.

The texture used by the ring-shaped platform in the Rock Star boss stage is designed to depict two different materials. However, the model only ever uses the bottom-right half of the texture, leaving the upper-left half unused. The shading suggests that this half may have been intended for the larger portions of the platform. The appearance of the material does not resemble any of the other materials used in any Rock Star stage.

On a side note, 1E9C (EXERCISE0) contains the How to Play demo. Interestingly, all the demos are in one room!

The Sound Check, available after beating the game, contains a handful of unused tracks. It also lists the game's songs in a different order than the official soundtrack, likely the order they were implemented into the game.

A remix of the first animal friends theme in Kirby's Dream Land 3! It can be accessed as Music 002 in the Sound Check. Given its early placement in the game's files and the presence of the two other animal friends themes as Music 003 and 004 (both used; 003 is used for the Theater menu and 004 is used as a stage theme), they may have been used to test the game's sound format.

The classic victory dance theme of the series. Present as Music 061 in the Sound Check.

A shorter victory dance. Present as Music 062 in the Sound Check, the last entry.

This is present in the Sound Test. It's the first two phrases of the traditional Japanese poem Iroha, the Japanese equivalent to the ABC song, repeated over and over in a sped-up voice. Due to how it ends, it was likely intended for the TVs in Stage 3 of Shiver Star. Present as Sound Effects 395 in the Sound Check. 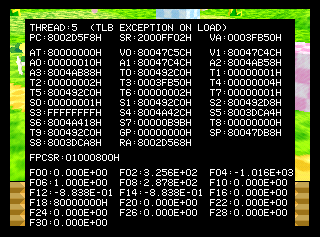 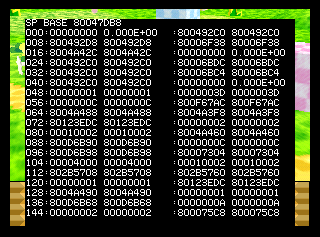 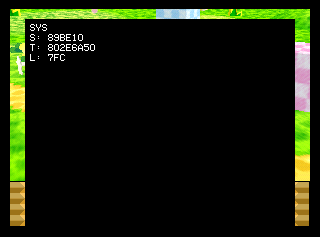 The same crash debugger can also be found in Super Smash Bros. and Pokémon Snap, both of which were also developed by HAL.

There is a cheat code that will set File 3 to 100% completion, presumably for debug purposes. In order to activate it, make it so the save files are in the following state:

Reset the game, and when the HAL Laboratory and Nintendo logos appear, hold L on the second controller and enter the following button combo: C-Up, C-Up, R, C-Right, C-Left, and Start. The 1-up sound will play, and when you go to the save file screen, File 3 will be set to 100%. This code works on all the known original N64 versions of the game: Japan Rev. 0 through 3, USA, and Europe. It'll also work on the Wii U Virtual Console and Nintendo Switch Online versions but not the Wii Virtual Console or Kirby's Dream Collection versions since the N64 L Button isn't mapped to anything.

You can see the decompiled source code for the function behind this cheat code here.

These models/geometry are used in the game, but cannot be seen through normal means. 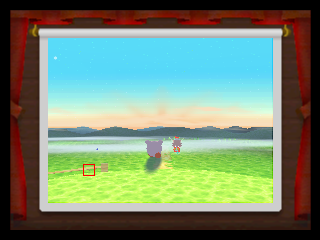 In the cutscene where Kirby meets Ribbon, there is a tiny copy of a fence post present in the scene. The extra fence post, which is smaller and more tapered than the other fence posts in the scene, is floating above the ground to Kirby's left. This tiny fence post is visible in the bottom-left portion of the screen when Kirby runs into the sunrise, showing up as one or two brown pixels just beneath the fence beam. 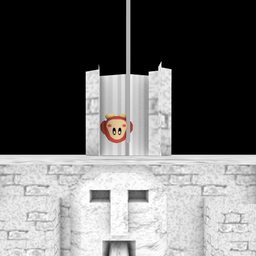 In the rising sand room of the first Rock Star stage, Waddle Dee breaks through the ceiling to give Kirby an exit. Hidden up in the exit hole is a rope model that loads with Waddle Dee. The rope is long enough to reach the floor, but it never moves and is not low enough to be seen. With Kirby's ability to fly, it makes rope unnecessary. Lowering the rope would have given little benefit to the player and would have only slowed down the scene. 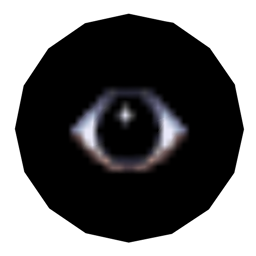 In the cutscene after Waddle Doo is defeated, the Dark Matter ball that flies up is a different model from the typical Dark Matter used in other cutscenes. The design resembles Dark Matter's appearance in earlier games, though this exact design is new. The eye is modeled out and protrudes from the body. The whole model uses 512 polygons, which is relatively high-quality for a Nintendo 64 game. Though, some other characters use more.

Along with a necessary title change, the two copyrights were merged into a single line in the international version.

The fourth HUD option in the Japanese version of the game has an appearance similar to Japanese calligraphy, while the international version changes it to a crayon-drawn theme.

One of the food items is a rice ball in the Japanese version and a sandwich in the international versions, continuing a running theme of removing Japanese foodstuffs. Oddly, Waddle Dee still "eats" an onigiri during the stage-ending picnic sequences in both versions.

When losing to Boss Battles mode, the Japanese version says You're hopeless... while the international versions change to It's hopeless...