Kirby Mass Attack can best be described as Kirby meets Lemmings. Kirby gets split up into 10 smaller (and somehow more adorable) Kirbys that have to work together to destroy enemies, open paths, and get food. It is also the successor of Kirby: Canvas Curse in some ways, and contains unlockable subgames in a variety of genres (including a vertical shoot-'em-up and what's pretty much a remake of Kirby's Pinball Land).

Presumably an unused obstacle meant for the unused Frozed Field level (or just any snow level in general). 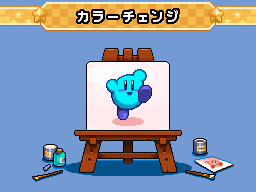 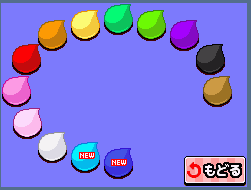 It seems you could originally modify Kirby's color, like in Kirby Squeak Squad, but this feature was scrapped fairly early. The graphics for the menu can still be found in the game, though they were never translated from the original Japanese. Available colors would be indigo, cyan, grey, light pink, pink, red, orange, yellow, blue-green, green, purple, dark grey, and beige.

Only Toroppon's cart is fully detailed.

Only the igloo-shaped Pytago sprites are complete. All three have red guidelines on each side.

Spiky, Rocketon, Carryon, Giga Clanksprout and Tortletummy all seem to be finished.

Big versions of some enemies.

An early version of the wrong door in the haunted house levels.

The Regular Version Of Blipper was supposed to be in the game, but was removed. However, an Electrical Version can be seen in stage 5 of Dedede Resort.

There are even some unused elements in the subgames, particularly Strato Patrol EOS, which was to have Plasma Wisp as an enemy and King Dedede as a playable character. 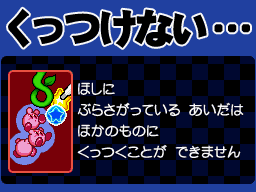 An unused screen, in Japanese, with a hint about grabbing:

In the game Kirbys can grab things even if they are hanging on to the star, but this hint indicates that might not have always been the case. 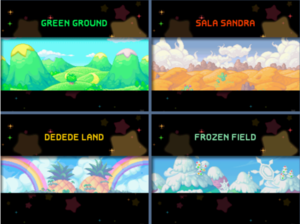 There are 4 unused splash screens for every world in the game, including an unused one called "Frozen Field". Several differences can be seen here: 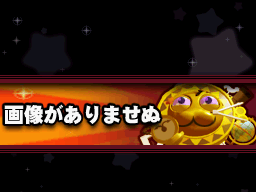 A placeholder stage select screen featuring a 3D render of Galatic NOVA, which is kinda odd since this game is in 2D, the text translates to "Image does not exist".

The Japanese version has an enemy credits sequence with 35 pictures and Kirby having a picnic that was, for whatever reason, dummied out from all subsequent versions. The untranslated graphics are still in the game's files. It's worth noting that the sprites used to represent the enemies Stickle and Ill Gate in the enemy credits are not the sprites used in the final version of the game but are actually unused sprites. English localizations are in parenthesis where applicable, as only Necrodeus and Kirby are effectively the same. 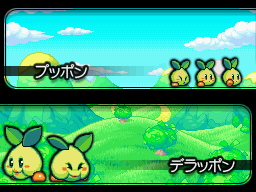 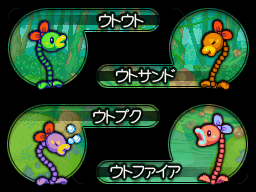 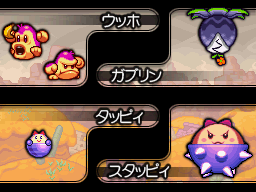 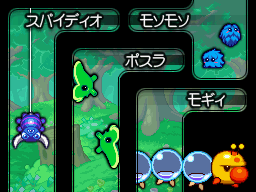 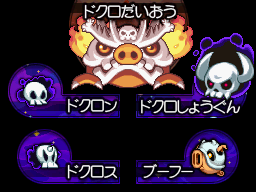 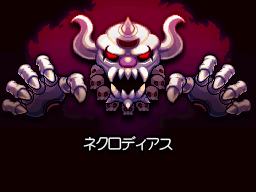 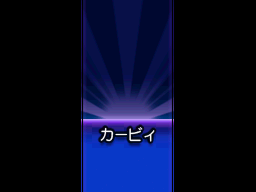 The localized versions of the Strato Patrol EOS minigame's game over screen, instead of localizing "Holy NightMare" to "Night Mare Enterprises", simply removes the text entirely and replaces it with a background featuring blue clouds in the likeness of Nightmare himself (or eNeMeE, as he is known in the 4Kids English dub of Kirby: Right Back at Ya!).

The following pieces of development text can be found in the ARM9 binary.

The "map" folder in the game's filesystem contains the levels.

The project's internal name is "wadogo", according to the above development text and the filename of the SDAT file, "WADO_SND_new.sdat". The name also appears in the filenames of some press materials released by Nintendo.

After loading the game, it will freeze with a blank screen if it detects that it is a copy.