Kirby's Epic Yarn sees Kirby turned into a yarn version of himself by the evil sorcerer Yin-Yarn, who seeks to conquer Dream Land. Notable for removing Kirby's ability to inhale and any way to get copy abilities, as well as being the start of Nintendo's IP-related arts and crafts video games developed by Good-Feel.

It later received a 3DS port in 2019 as Kirby's Extra Epic Yarn.

In files/env/Common/E3.gfa, there's a file called E3.arc that has the unused graphics seen above. These were used for the E3 demo's title screen and are rather different compared to the graphics seen on the actual title screen.

There are several images that were going to serve as hints on how to defeat certain bosses in game. However these were ultimately scrapped, and they were only produced for the first 4 boss fights. But they do contain some early designs of several characters.

Another dummy texture with an outline for a button. 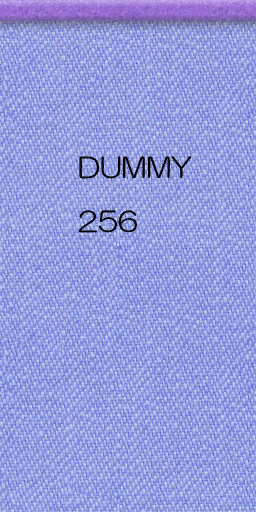 A dummy texture that was originally used in Crystal Cavern. It had probably served as an early floor.

Located in files/init/fb.gfa are various files containing unused graphics. The purpose of these files is unknown.

The file "wool_test" is the only one to return in the Nintendo 3DS port, though it has way more unused graphics.

Located in files/test/debugfont.brfna is a simple font for debugging purposes. 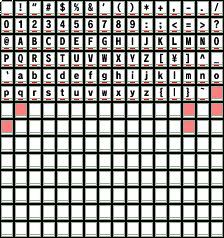 Seven test maps can be located in files/mapdata. Sadly, their stage data, such as backgrounds and floors, have been removed entirely from files/stage/. Fortunately, collision, enemies and lightning effects still exist within the mapdata, so they can be explored if they use another level's stage data.

Please note that these were loaded using Patch Castle's background elements. These stages are NOT supposed to use these elements, and Patch Castle's objects were only used to succesfully load the maps in game. No further editing took place.

Stage401 is a map used to test ramps and how Kirby interacts with them. Due to the simplicity of the stage (and because the background elements can be very distracting), a screenshot of it will be skipped.

Stage402 is a flat map with 3 Calderon enemies. They ocassionally spit out rocks. Kirby is free to roll them into yarn balls or destroy them in any other way. 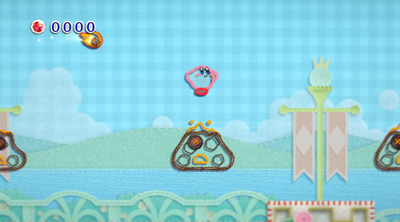 Stage990 is a map with 3 Cyclods and 10 Magmotamus enemies that are colored green, possibly an unused variation of the enemy. This map is used to test how the spiky bullet works on enemies. The last 3 Magmotamus have floating platforms above them. 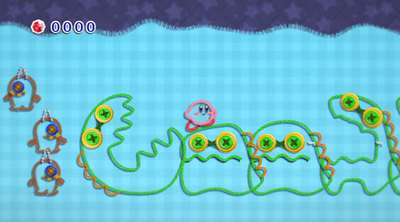 Stage996 is a map used to test the lightning effect of Squashini's stage. Ocassionally, Waddle Dees may pop up from the crowd to cheer Kirby on. Due to an unknown problem, Kirby will be forever stuck in a falling state, and nothing is able to free him. 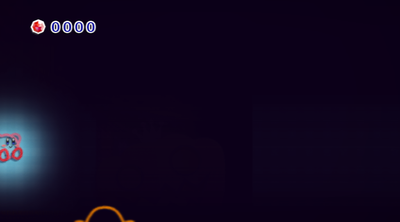 Stage997 is a map used to test ramps and yarn balls. Kirby can pick up the ball and ride along the ramps. 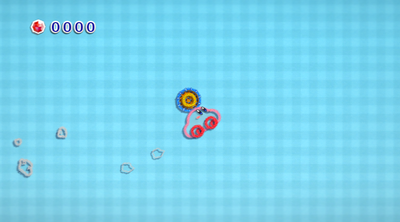 Stage998 is a room full of water used to test the Danglerfish enemy, and possibly Kirby's interactions with bodies of water. 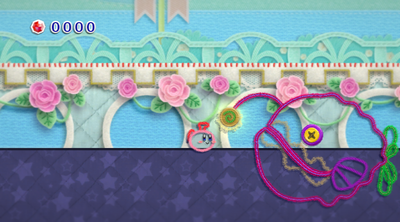 Stage999 is the last test map. It's a room used to test the eating capabilities of the Slobba enemy. 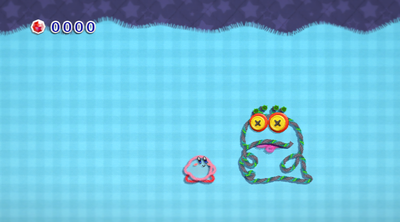 The following parameters are mentioned in files/param/fluff_param.txt, but removed from the executable.

The Japanese version contains full text for English, French, and Spanish. To see these, open the dol using a hex editor and replace the "Japanese" string at offset 007E08F0 with "EnglishUS", "FrenchUS", or "SpanishUS". The audio will still be in Japanese, but the text will be in the new language.

Kirby's Epic Yarn didn't start its development as a Kirby game. According to an Iwata Asks interview, the game actually started as a new Good-Feel IP called "Fluff's Epic Yarn", with Prince Fluff being the main protagonist.[1] As this is the case, various leftover files from Fluff's Epic Yarn managed to find their way into many paths of the game.

Three unused playable characters are known to exist inside the files. They contain all of their yarn textures, eye models, and other accesories, but their bodies cannot be rendered.

It's important to note that these characters all have many animations, but only eye animations can be played.

Located in files/chara/demo/StoryDemo/stage/demotestAll00.brres is a model that resembles what appears to be an leftover cutscene from Fluff's Epic Yarn.

Kirby's Epic Yarn sports two internal names, those being "PJ008" and "Fluff" according to the game's sound archive and some files in the "param" folder respectively.