Kirby: Nightmare in Dream Land is a portable remake of Kirby's Adventure, with the obvious updates (including the graphics, now matching the more recent games) and several new changes. 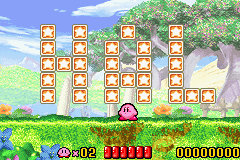 The HAL Room from Kirby's Adventure in 1-2-1 (room 09) is still present, but because the game works very differently internally, the method to access it from the original game won't work.

To access the HAL Room, Kirby has to go to the right of the Warp Star, then the player has to turn on and turn off the two codes:

The Warp Star will then take off and crash ahead of the screen, allowing Kirby to move forward to the HAL Room.

It remains unchanged from Kirby's Adventure, the only difference being the lack of a Broom Hatter on the L. Kirby will also not be able to run after the Warp Star crashes.

Use the GameShark code below:

then enter Level 1 Stage 1 to see it. (Tested on VisualBoyAdvance) 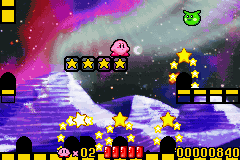 Many debug rooms remain in the ROM, all with a specific purpose.

Seems to be a general test of level building and tiles. Both doors lead back to the main hub.

A test room for various slope types. Both doors lead back to the main hub.

Inaccessible from the debug hub, this room tests air and water currents. Both doors lead to Room 14E, though the underwater door is nearly impossible to access.

A debugging room for icy surfaces and spikes. The door leads back to Room 14D. 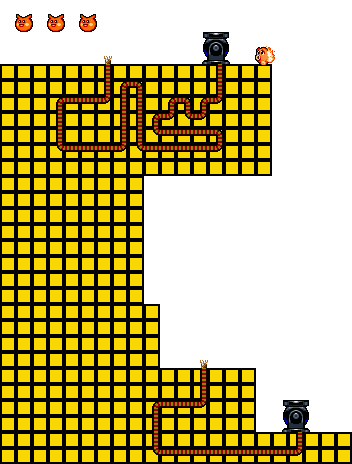 Cannon test room, both for testing the general functionality of cannons and the vertical scrolling of Kirby after he has been fired from one. There is no way in or out of this room without cheating.

A debug room possibly used to test Kirby's interactions with various surfaces when near the bottom of the screen. The door leads back to the debug hub.

Obviously a miniboss test room. The door leads back to, unsurprisingly, the debug hub.

A general test room for the most common of tile types. No way in or out of this room.

A test room for, presumably, testing Kirby's interactions with various surfaces while near the top of the screen. Note that tiles with the red background cannot be accessed, as the screen borders cut them off.

Like in the original NES game, the theme that plays after Kirby defeats King Dedede only plays for about 18 seconds before fading out. However, after those 18 seconds have passed, the song will continue playing in a loop that only consists of synth and percussion.

An unused "plop" sound, located inside the last two Voicegroups. It would later be used in Kirby: Canvas Curse whenever Kirby exited a tube.

An unused explosion sound, also inside the last two Voicegroups. A modified version would later be used for the Bomb Copy Ability starting from Kirby's Return to Dream Land.

A placeholder icon found among the rest of the HUD graphics, the finalized icon is included for comparison. The text translates as "fire", but it's spelled in a different way than the actual Fire ability's icon (closer to "fiyah" in English prononciation).

Even the debug tileset has unused tiles. These tiles might have been used in earlier versions of debugging rooms.

Interestingly, most of the unused tiles are lifted directly from Kirby's Dream Land 3! For whatever reason, Nightmare in Dream Land borrows heavily from that game's debug tileset.

In addition to the above tiles, there are more unused tiles with Japanese text. They translate as, from left to right: Fire, Stone, Ice, Needle, Broom, Umbrella, Electricity, Cutter. These were the abilities from Kirby's Dream Land 3.

Aside from the logo change and the language selection added, the European version moved the copyright text down slightly, along with changing 1993-2002 to 1993-2003.